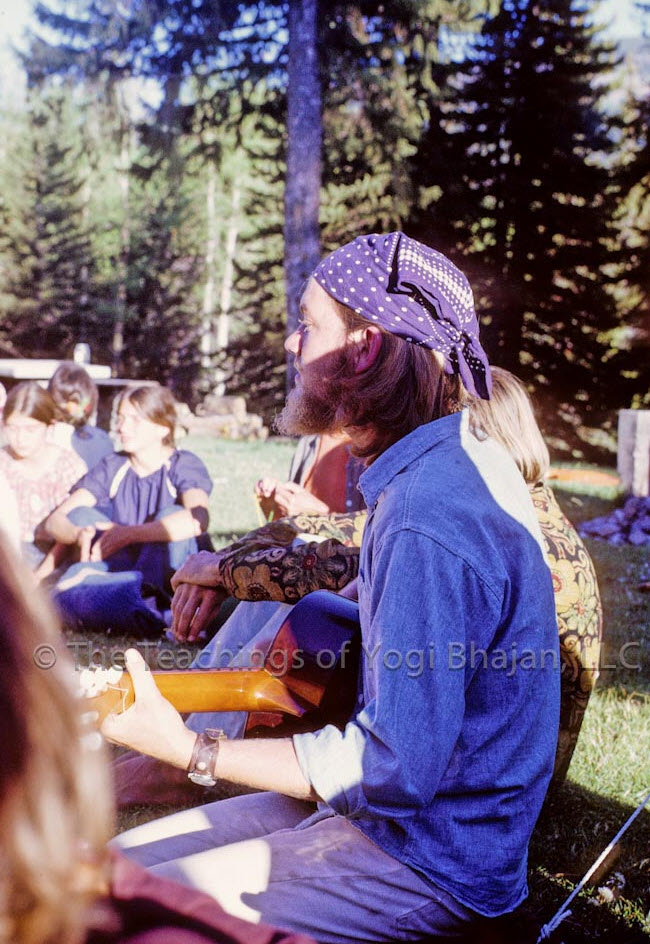 Livtar Singh at the 1970 Summer Solstice

As shared by Livtar Singh Khalsa in the January 2007 Aquarian Times.

It was held at Santa Clara Canyon, some kind of alpine heaven between Espanola and Los Alamos, New Mexico. It had a clear mountain stream, meadows of long sweet grass, and tall, beautiful pine trees. “Wow,” I thought when I first saw it, “This is the kind of place to have an experience.” Little did I know.

My “tent” was a piece of clear plastic spread between two mounds with a gully between. I had just enough room to lie in the gully under the plastic. The altitude was so high that there was snow on us when we awoke the first morning.

The owners of the land were our brother and sister Native Americans who graciously allowed us to camp there. We thought that meant we could get away with anything.  We had all arrived on the land full of hope and optimism, energy and spunk, dreams and visions of an Aquarian future.

The reality of life as a mixture of “The Bliss and The Blues” was about to hit home. Within a couple of days, we had broken enough terms of our “treaty” that we were being thrown off the land. (I think I heard something about some guy dealing out of his car, and the rule about not bathing nude in the creek also wasn’t being too closely observed. After all, we were only six months out of the ’60s.)

“Oh mama, could this truly be the end?” Was our Solstice over? Could our great experiment be done before it was even off the ground? Should we hang it up and take off for our new ashram1 teaching assignments? Or should we try to move the entire Solstice production to another location? We had a meeting and decided to move the whole thing.

So how do you take a ragtag army of a couple of hundred hippie yogis and move them to another location when only one person knows where the other location is? You do it all at once.

We somehow got everyone loaded into their cars and lined up on the dirt road out of the canyon. We pulled up to the main road where all the cars stopped in a long line. Suddenly, Yogiji jumped out into the middle of the main road and blocked it. He held up a large shawl and started to swing it around in a great circle above his head. In an unbroken stream, the cars started shooting out to make a right turn onto the highway. “Go, Go, Go!” shouted Yogiji as he spun the shawl like a karmic bullwhip.

At that moment I mentally moved through time and thought I was watching Moses in a great white turban leading the Israelites from bondage to freedom. After the cars had all made it onto the highway and were speeding away, he jumped into the car (I think it was a small under-powered Peugeot) with Dawson, the Santa Fe ashram teacher at the time, and passed all 60 cars without pulling into his own lane once, and that route was a narrow two-lane road back then.

My car was near the rear, so I saw him pass the entire line, going over rises and around blind curves. I will never forget that for as long as I live-that knowing that your destiny lies in knowing where the true road leads and what is on it.

We were led to a patch of land that we have now driven by many times-the dry riverbed just north of Camel Rock, across from what is now Gabriel’s restaurant. The owner, Robert Boissier, had agreed we could use it for the last few days of our Solstice experience.

P.S. We did make it out of the riverbed.

1Literally meaning ‘house of the teacher;’ a home where yoga is lived and taught

Livtar Singh Khalsa became a student of Yogi Bhajan in 1969. He was 19. After this first Solstice he was sent to Atlanta to start an ashram. He has lived there ever since, teaching yoga, writing music, burning atomic-bomb-amounts of karma, and generally having a good ole time.