A Gift of Faith 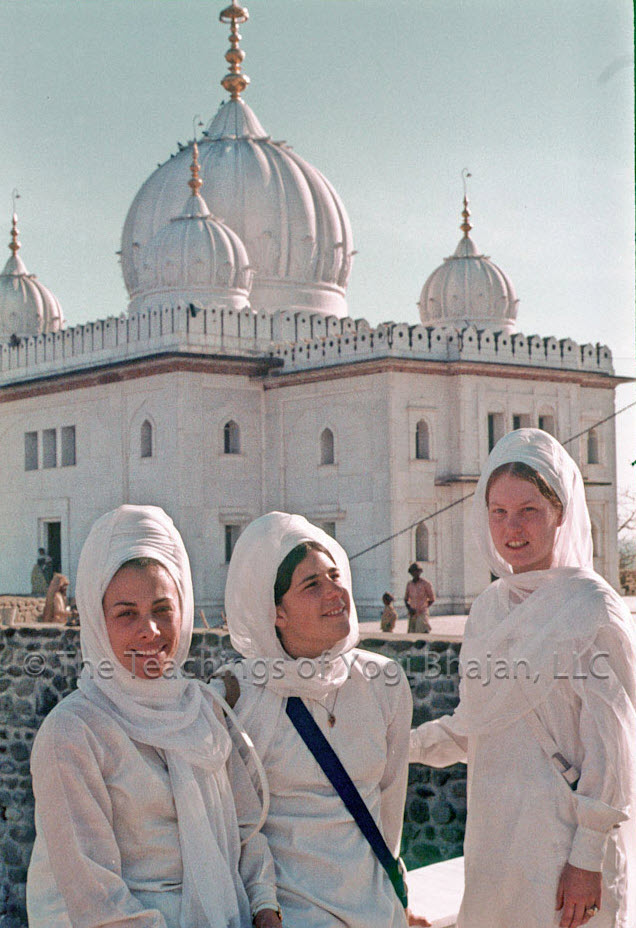 This passage by SS Gurucharn Kaur Khalsa of Boston, MA, USA, appeared on pages 278-281 of the “Sikh Dharma” section of the book, The Man Called the Siri Singh Sahib, which was published in 1979.

I had been living in the ashram in Pomona for about six months when doctors determined that I had ovarian cysts and advised that I required surgery.  I was only eighteen years old, and very inclined to do whatever a doctor said.  I went through the operation.  At that time, they removed three cysts—two from the right ovary and one from the left—and did a uterine suspension.  Slowly my body began recovering its strength, but still I was never well or free from pain.  The doctors said I needed another operation.  Just eight months after the first surgery they operated again and removed two more cysts and a lot of adhesions that were the result of the first surgery.  Again, I worked on recovering strength and finding health, but it continued to escape me.  Right after the second surgery my ovaries produced another cyst.

I was confronted with the reality of the situation – the finality of having my ovaries removed.  I did not want to go through another surgery and I had hopes of someday becoming a mother.  The doctors argued in favor of surgery by pointing out that once they were out, I wouldn’t have the pain and besides, the chances of my ever becoming pregnant were extremely remote. I was told that it was dangerous to my life to consider having a child.  They felt that even if I did manage to get pregnant, my uterus was not in a condition to carry or deliver a baby. I walked out of the office in tears, determined never to go back.

Most little girls play with dolls and dream of the day they will be mothers with children of their own.  I certainly did.  When I came out of the doctor’s office imagining a new futuristic dream where I was not to be a mother, it was very painful.  The intense emotions not only opened my mind towards the future but also towards the past.  I remembered a prayer that I had prayed a few times when I was a little girl.

Sitting in church at Easter time, I stared at a beautiful stained-glass window brightly illuminated by fresh spring sunshine.  In my child’s meditation (the priest was giving a sermon I didn’t understand), it occurred to me that the greatest thing a woman had ever done was give birth to the Saviour.  I wished that I could be as great as Mary.  We were taught the “Son of God” would return a second time.  I thought he would be born and someone would be his mother.  So that day, I sat in church and prayed with all my heart, sincerity and the innocence of a nine-year-old girl that God should choose me to be the mother of a great son like Jesus Christ.  Ten years later, it was that prayer which inspired me to turn away from the doctors’ diagnosis and towards spirituality.  I as no longer following Christian tradition, but the idea of bringing onto this planet a hero, a giver or a saint, living the image of Khalsa as created by Guru Gobind Singh, which had been taught by the Siri Singh Sahib, the essence was basically the same.

I have never met another man or woman that is of the same caliber as the Siri Singh Sahib. It is difficult to describe the extent of his sensitivity, compassion, clarity and spiritual endurance.  These qualities coupled with his vast experience and wisdom draw people from all backgrounds and beliefs to ask for his help and guidance for problems ranging from “What is the best kind of toothpaste to use?” to: “How can I become one with the Creator?”

I asked for his help with my problem.  “What shall I do?  They want to remove my ovaries! I won’t be able to have children.”  He stood cool and alive like a solid oak tree whose branches reach to the heavens and whose leaves provide shelter for everyone.  He looked at me and, in a deep soft voice, advised me to accept the will of God.  It was not my destiny this lifetime to bring a child through my womb.

Then he described what a woman is:  someone who creates, nurtures, loves, selflessly serves undiscriminatingly.  Being a mother is not dependent on nine months of pregnancy followed by labor pains.  His truthful words should have been a comfort to me, but I cried while my mind darted around trying to find an approach that could calm my emotions and allow me to accept my fate.   Siri Singh Sahib stood close to me.  He looked into my water-filled, swollen eyes and said, “Sikh women never cry.  Remember how gracefully those women spoken of in Ardaas accepted God’s Will without complaint,”

A chunk of fear mixed with a large portion of stubbornness and sprinkled with a little hope kept me from going back to the doctors for the surgery I needed.  A few months had passed, leaving me more and more physically ill, and less and less willing to submit to the treatment.

The Siri Singh Sahib came to teach a course at the ashram where I was living, giving me the opportunity to learn from him and to gain some strength.

Compassion is defined as “sympathy with the distress or suffering of another: merciful.” The Siri Singh Sahib can be defined with the same phrase.  He wanted to see my physical and mental distress relieved.  He had spoken in classes about Guru Ram Das and the sacred Harimandir Sahib, the Golden Temple.  He had taught about the living power of calling on the name of Guru Ram Das for blessing and protection.  He told of the miraculous healing abilities of the nectar tank of Amritsar.  Always he spoke with conviction, commitment of faith and the assurance which comes from knowledge.

Now he told me that there was one chance. I could be healed through the Grace of Guru Ram Das, by meditating and bathing at the Golden Temple of Amritsar.  I did not have any experience to open my heart to being healed by an invisible Guru.  Being an American, I was definitely not inclined towards believing in miraculous pools of water.  Above all, I was sure that to expect a miracle to happen in my own life was pure fantasy.

But the Siri Singh Sahib had faith.  His faith in the power of Guru Ram Das to grant my prayer for a son was like a giant artfully cut diamond – flawless, unbreakable, enchantingly reflecting and magnifying light. The light from his faith washed over me and left a small ray of faith within my own heart.  I could never have called on Guru Ram Das for help or have spent the money to travel to India, in order to bathe in the nectar tank of the Golden Temple if the motivation had had to come from my personal experience and belief.  I was able to act in order to gain the experience of faith in miracles because the Siri Singh Sahib Ji’s own faith was so vibrant.

I went to India with a small group of American Sikhs in February 1973.  My purpose for going was to be healed by Harimandir Sahib.  I wanted to be healed and longed for the faith that I knew would allow it to happen.  I went through the rituals.  I bowed and bathed and prayed. I longed to belong in the society of the faithful devoted Sikhs who inspired me to join them in their experience of bliss.   The entire three months I stayed in India, I continued to desire health; longing, longing for faith.  I never went past the stage of longing.  I needed to reach a place of belonging.  I returned home from India as sick as I had ever been, but with one lesson learned. I knew there was a Guru, a people, and a home to belong to.

In January of 1974, the opportunity came to travel with another group of American Sikhs on a pilgrimage to Amritsar.  My heart pounded with joy and my voice stopped in my throat, when my husband told me I could go on the pilgrimage.  I was still quite ill and wanted to be healed.

I felt as though I was going home.  The quality of my experience on this second trip was very different.  I no longer felt such an intensely desirous longing.  Now I felt a conscious identity as a disciple of Guru Nanak.  I was there to be in the House of my Guru and to enjoy the blessing of hearing the holy Gurbaanee.  I bowed and prayed, but they were no longer rituals.  They were manifestations of the connection which I felt to Harimandir Sahib as my home, and to Guru Ram Das as my Guru.

One day as I sat in the early hours listening to Asasaa dee Vaar, I opened my soul to fully experience the existence of Guru Ram Das.  It was then that I knew my prayer would be granted.  I was healed.

Nine months after returning from Harimandir Sahib, I gave birth to a son.  Through the vastness of God and the Grace of Guru Ram Das, I have had the experience of faith in miracles.  My son is a walking reminder of the power of faith.

The Siri Singh Sahib has that faith.  He has shared it with me.  It is the seed of his own faith that he planted in my heart, allowing Guru Ram Das to change my destiny.  I am ever grateful for this great man with the title of Siri Singh Sahib, for giving me such a precious gift.