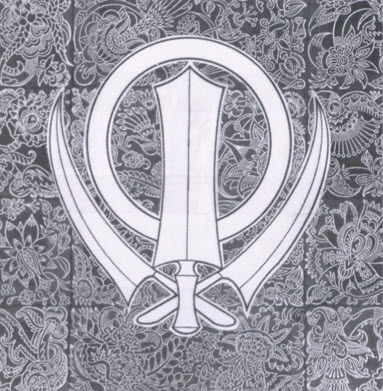 The form of woman is the Bhagautee, the goddess with eight hands riding on a tiger, which represents the ego.  She is a symbolic picture.  Half of her represents gifts and the other half of her arms are representing defense.  She has four hands which are holding swords and spears; the sword is defense; the spear is distance.

In her other four hands she holds grace:  flowers, beads and lotus flowers for purity.  She is the goddess, the symbol, of both compassion and power and of self-defense and grace.  Shastra and Shaastra weapons and knowledge.  Weapons without knowledge or knowledge without weapons is just as useless as anything in the world.

This Aadee Shaktee or Pritam Bhagautee symbol is as old as mankind.  In ancient times, a woman would rise up on a platform and all the tribe would stand and greet her.  She would be dressed in total white, and as the sun would rise, she would raise her arms over her head with her arms curving in toward each other.  She would meditate and call on God, and the entire audience would meditate on her. That is how the first meditation on God started.

The Aadee Shaktee symbol, then, portrays the human being in relation to the Creator.  The two swords on the sides represent the protective hands of God.  The human being is represented by a two-edged sword, eedaa and pingalaa, right there in union, and the circle represents the aura, the entire universe, the being.  Everything comes from God, and everything goes to God; that is what it represents.  ~August 12, 1997