Answering the Call – “When the Call Comes, You Must Answer!” 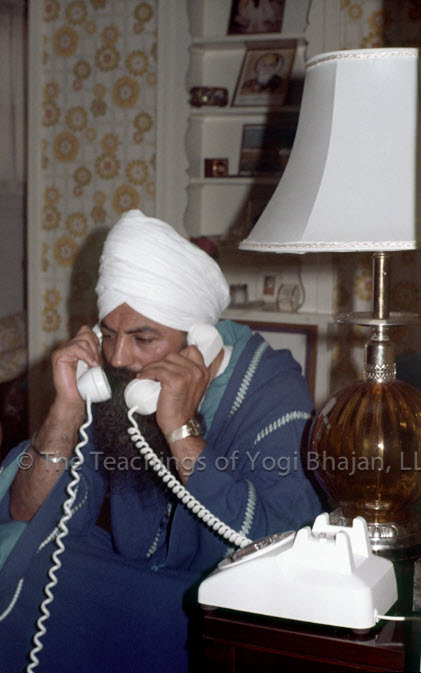 About 10 years ago I was at the fall International Khalsa Council meeting in Espanola, New Mexico. The Siri Singh Sahib was talking about the role of the Khalsa Council and how it is our responsibility to deliver the Dharma to the future.

Then he said (and I am sure you know why I am capitalizing this), “WHEN THE CALL COMES, YOU MUST ANSWER!” Right then my cell phone rang.

I hustled outside, hit the talk button, and it turned out to be the pastor of a church in Pasadena, who I had not seen in many years, asking if I would give a talk to his congregation.

My immediate thoughts were: “This would involve flying across the country and taking time from work. What would I talk about? It is just not practical to do it.” Then the words of the Siri Singh Sahib rang in my head. “I would be happy to do it,” I told the pastor, and it turned out to be a wonderful experience.

I remember another incident many years before that. It was in the days when the Siri Singh Sahib would personally travel to ashrams to give Tantric courses. It was an evening after Tantric, and the Siri Singh Sahib was giving appointments to anybody who wanted to see him. There were a lot of people who wanted to see him, and by the time it was my turn it was 2:00 in the morning.

Before I entered the room I heard him comment to somebody how exhausted he was and how he hoped this would end soon. I walked in the room, and there he was smiling at me, looking energetic and bright and letting me take as much time as I needed to discuss my issue with him.

What I learned from both these experiences, and from others over the years, is that the role of a teacher is a complete surrender. When a teacher is asked for help, he or she doesn’t have a choice but to give it, regardless of what he or she may feel or think personally. It is a commitment to living outside one’s ego.

A Way of Life

When that commitment becomes a way of life, life becomes divine. Guru Arjan is our model for this. He was considered Partakh Har, a personified god.

His ability to live outside his ego allowed him to be brutally tortured and yet to not pass judgment or react in a personal way. He provided the most extreme example, illustrated by his own death, where his role as a teacher did not falter.

It was perfect, and a lesson to us about the depth of consciousness that is possible.

I understand the size of the gap between myself and Partakh Har. It is a big one. However, I also believe that life’s gift is the experience, slow and uneven, of closing that gap. It closes a little each time I am called to teach and I answer the call while putting my own needs aside.

These small incidents chip away at my ego until eventually selflessness becomes a habit and then a way of life.