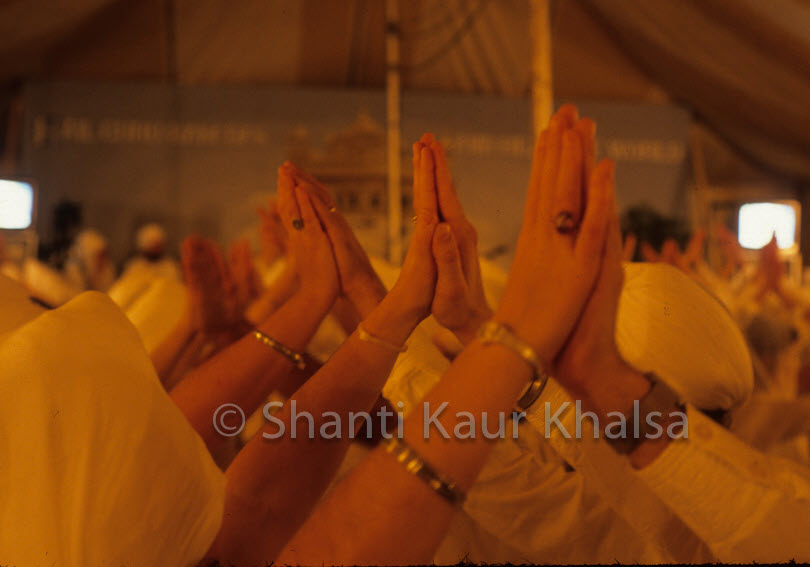 Sometime in 1998 or 1999 I jumped into my teacher’s station wagon with a bunch of friends from class for a Tantric road trip to Atlanta. The car broke down on the way and this guy hanging out at the Circle K drinking coffee with the other old guys at 6 in the morning was the only one who would help us. We were a bunch of ragtag looking kids with cloth wrapped around our heads, and this guy stood up and broke the car’s thermostat open with a screwdriver so we could make it to Tantric without overheating. All his buddies looked at him like he was as crazy as us, but he helped us anyway.

We clambered into the hotel conference room with like 5 minutes to spare before the course started. It was this big, carpeted huge room filled with people on mats, doing cat-cow, warming up while gentle music played. I had never seen so many people doing yoga. My yoga. Kundalini yoga. It was going to be an awesome day, I could feel it.

I sat down across from this girl my age, young, and introduced myself. I didn’t know her. She said two words at most. We had to stare into each others’ eyes for an hour during the first exercise, and she kept looking away, like I shouldn’t be staring at her. It was awkward. I had never stared at anyone that long in my life, not even my family, or even a girlfriend. As the exercise went on and on I kept getting all this mental garbage about what it means to be a man and how we treat women. It was hard to meditate. I kept feeling guilty and she kept looking away. I started to cry.

Before lunch we did a half-hour meditation looking at the tip of our nose and moving our fingers slowly. I started to fall asleep and kept waking myself up to do the exercise right. It was so cozy, I felt like I had already done a hard day’s work and I just wanted to sleep. My eyes were crossing and the fingers slowly moving at the end of my hands started to hypnotize me. I was trancing out. It was cool. Suddenly something woke me up. A fish made of light, like from that old LiteBrite game I had as a kid, swam lazily past my lap. It startled me and I came out of my trance but it was still there, swimming right by. I was wide awake looking at it go right by and I was freaked out. But I didn’t move. I fixed my eyes back on my nose and kept up.

They had a buffet at lunch and we all sat together in silence. Everybody was spaced out and not talking to each other. We were spaced out but we were kind of cagey, looking sideways around the table. Everybody was doing it, me too. We were just poking our green beans with these heavy hotel forks and not talking. Then Ryan, our life-of-the-party yoga classmate, rushes to the table and plops into his chair with a mountain of green beans on his plate.

“Did anybody see that spaceship?” he yells.

We all busted up. Everybody started talking at once, arms waving, telling what they saw during that last exercise. Fish. Spaceships. Fairies. You name it, we all saw something. And we were all wide awake. It was real. Were these things there the whole time, but you couldn’t see them? Or were we just tripping out of our minds – all of us? We all bonded again after that silence got broken, It loosened us up for the afternoon.

And what an afternoon! Both arms up for an hour, right after lunch. I learned an important lesson about Tantric that day: do not eat a mountain of green beans at lunch at Tantric. That was the hardest yoga I had ever done. At the end of the day, my teacher told us that was the hardest day of Tantric he had ever done, and he had been doing Tantric since 1971. We were hardcore. I had both my arms up, people were groaning, my partner was looking at me like she wanted to kill me, and I felt like I was going to throw up. It was awesome. 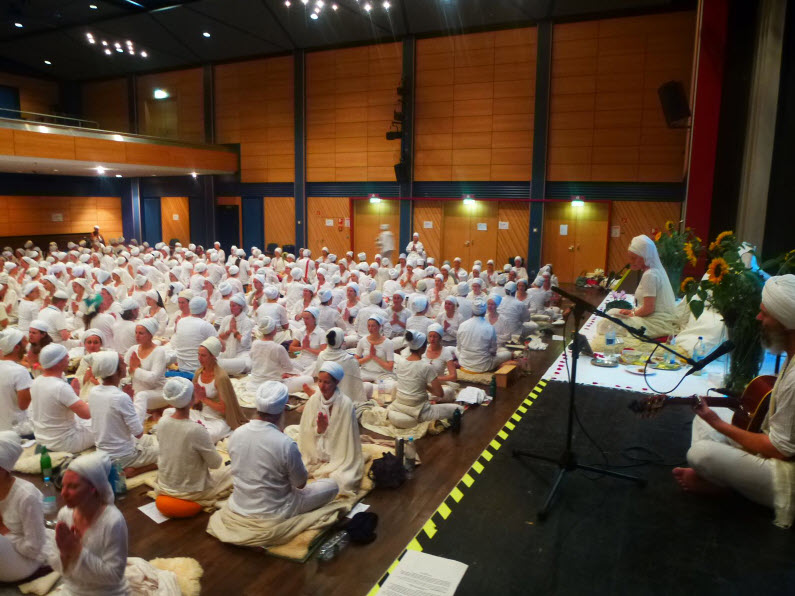 The last five minutes of the exercise – I had been really good, elbows locked, angle perfect, shaking like a leaf – this vibration started going through my body. My arms suddenly felt light and locked in. I went into ecstasy. I fell in love with everything and everyone. I was tapped in. The pulsing running up my arms and holding me was always there I realized, I just had to plug in to it. That’s what yoga is for. I realized all this. When the facilitator called time I was disappointed. I wanted to stay there another hour. I wanted to stay there forever.

I went up to the facilitator right after we sang Long Time Sun. “Can I borrow a pen?”

Sat Simran looked at me like I was a lizard. “I suppose…” she said.

She handed me this heavy pen, really fancy. She told me she bought it in France, and it was very expensive. She kept eyeing me. I would have been ok with a bic pen, I just wanted to write my phone number down for my tantric partner because I had fallen in love with her and had become a better man. But Sat Simran does not use bic pens. That was the first time I met Sat Simran. I liked her. I gave her the pen back and said Sat Nam.

My tantric partner was not in love. She took my number but never called me. I never saw her at Tantric again. I don’t know what ever happened to her. It was just that we had gone through such an intense experience together, I thought we had a connection. Later I learned that everybody does this at Tantric, it’s no big deal.

Really I really fell in love with yoga that day. I decided to walk this path until I couldn’t walk anymore. Then I would crawl. What else should I do with this life? Watch T.V.? Give me a break. I wanted God, God, and nothing but God.

The ride home was a weird come-down. We stopped at a gas station somewhere in Tennessee at 9 o’clock at night and my teacher slapped his sheepskin down on the asphalt while the gas pumped and did cat-cow, all dressed in white still. Two cops in an unmarked car parked next to us stared at him and us the whole time, sipping coffee out of styrofoam cups. I didn’t know if it was ok to love them as well, but I tried. I was coming back down to earth.