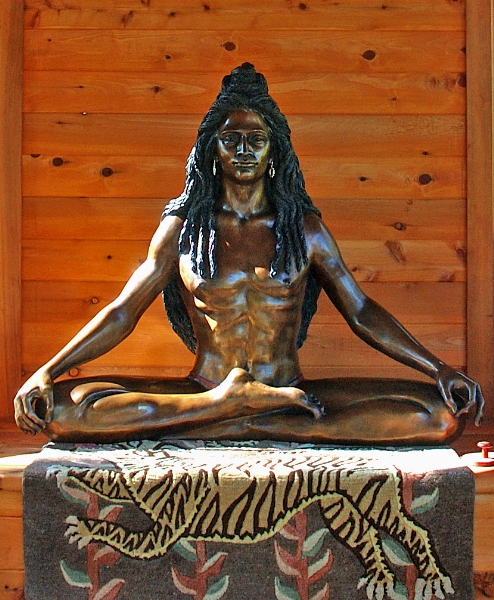 The teachings and technology surrounding yoga, as described by Patanjali, were honored by the Sikh Masters. Yet, the culture of the yogis was something Guru Nanak challenged. Yogi Bhajan described it this way:

“You say, ‘Well, I have been created and I have to think about why I have been created.’ So you run to the jungle and to the top of the mountains to meditate on it. Suppose by going on the top of a mountain and living your life in a cave, you realize God created you for a good reason—to do good deeds? Suppose you are eighty-six by the time you realize it and you can’t walk down that mountain anymore? What good deeds are you going to do?

That’s why Guru Nanak went to the sect of yogis who were siddhas. They asked him, ‘How is it going with this world of ours? What is happening downstairs?’

Guru Nanak said, ‘The Gurus have run away to the top of the mountains. What will happen down there when there is no guide?” He said, ‘All of you folks were supposed to guide those people living in the dark ages. Instead, you are sitting here on the top of the mountain, creating food from the air. So practically speaking, you do not care what is happening.’

When the head of the department does not care what is happening in the branches, you can imagine what is happening in the branches, anyway. Guru Nanak said, ‘There is darkness. You were supposed to give God consciousness to people. You are so God conscious that you have run away from your responsibility and have taken shelter in these huge mountain caves. When you, the enlightened ones, are unable to face the darkness, how can the darkness face the darkness?’

Before Guru Nanak’s enlightenment experience, he and his wife had children. One of his sons was named Siri Chand. Some of the old stories indicate that Guru Nanak knew his son had a destiny to become a great yogi. Yogi Bhajan talked about how Guru Nanak directed his son to work with the yogis to help shift their consciousness.

“One hundred-years is a total karma, if you have to live. The only body which surpassed that age group was Baba Siri Chand, and that was for a special reason. What happened? Why did Baba Siri Chand live 150, 152 years and then his body aloped? Elope means to run away. But alope is also a Punjabi word and means to totally get disintegrated into the tattvas.

“Guru Nanak bestowed on Baba Siri Chand the Guruship of the Udhaasee side. That is why we have 3HO, the responsibility to teach Kundalini Yoga to the point of experience.”

We like to think that religions develop in a linear way. But that is not the case. Every great spiritual leader leaves behind a diversity of experience and thought. When you go deeply into the history of the Sikh tradition, there are many threads that cross and intersect with each other.

Guru Nanak traveled on foot for years, living the life of a renunciate. His companion was a Muslim musician named Mardana. Together they would sing the sacred Shabads that came through Guru Nanak. These songs helped heal people and raise their consciousness.

When Guru Nanak retired from his travels, he sent his eldest son, Baba Siri Chand, to “straighten out” the yogis. Guru Nanak then picked up the plow and continued teaching, but as a farmer and a householder.

As the time for Guru Nanak’s earthly departure arrived, everyone wondered who would succeed him. Because of Baba Siri Chand’s profound mastery of yoga, many assumed that he would take his father’s place. But Guru Nanak’s experience both contained and surpassed the yogic sciences. He needed a successor who understood the Sound Current of the Shabad Guru.

“Guru Nanak’s own sons, Baba Siri Chand and Baba Lakshmi Chand, were perfect. Don’t think that there was anything less in them. But Guru Nanak wanted to give the grace to the householder. One gadee or throne of spirituality was given to Baba Siri Chand for the Udhaasee mat (school of thought), the unattached sect of that time. Therefore the other throne was to be given to a disciple, and that was Lehna who became Guru Angad.”

Baba Siri Chand retained his position as head of the Udhaasee Panth, but was passed over to become the next Guru for all of Guru Nanak’s students. So Baba Siri Chand stayed with the yogis.

Instead, Guru Nanak named his servant as the successor. Lehna, who came to be known as Guru Angad, had attained a level of devotion, love, service and surrender that allowed his consciousness to merge with Guru Nanak, through the Shabad. This was the succession that Guru Nanak decided upon. For many decades, those who practiced the Shabad, and those who practiced the yogic sciences under Baba Siri Chand, developed in their own style. But both paths originated with Guru Nanak.