This is an article from the 1978 Winter issue of Sikh Dharma Brotherhood, written by Shakti Kaur.

As I walked through the street, en route for the first time to the Harimandir Sahib, there grew a welling up inside of me, an inner excitement almost like that of a child on the advent of a special holiday. From deep inside the thought arose, “thousands upon thousands of lifetimes it has taken for this moment,” and my mind at once became very poised and silent.

I approached the washstand for cleansing one’s hands, and then the foot bath; each new sight was a wonder to my American eyes. My feet touched the marble, soft and white, and without a thought my forehead was upon it. My poised silence could hardly be contained. Finally, rising, my every step was slow and deliberate as the pattern in the marble tiles changed continually beneath my feet. The water shimmered. smooth and calm, and my eyes were ever so damp. 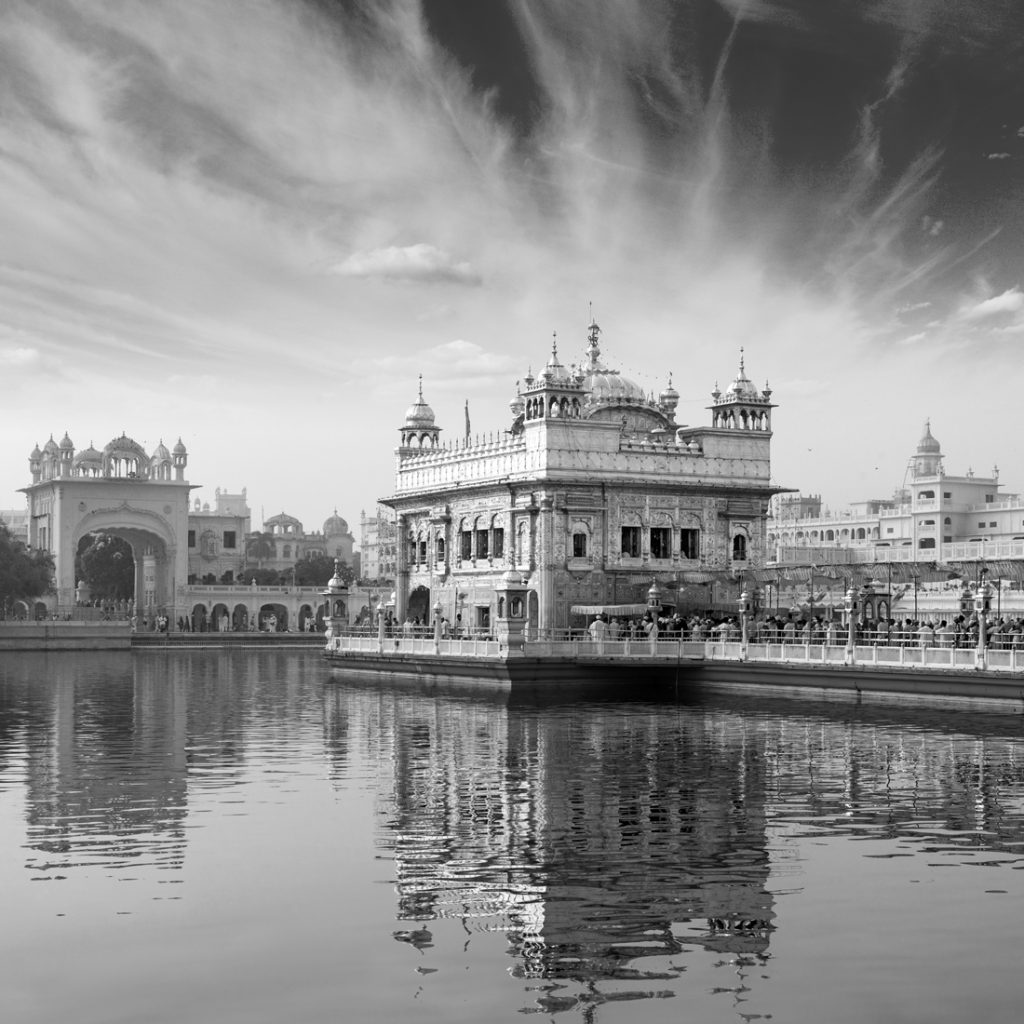 They call it Golden, but by that name alone one could never divine its radiance. In mid-afternoon its brilliance radiates sheer magnificence!

As I approached the threshold of the Darshani gate I passed marigolds by the thousands, garlands strung on a thread of devotion in love of the One, and the sweet smell of ghee from Karah Prasad. Oh how the Giver endlessly gives!

Once again my forehead was upon the marble, now at the threshold gate and again at the final entryway. As I bowed, I  wished never to rise again. My mind clamored with the Sound beyond all sounds.

Here is a place upon this earth where Grace prevails and nectar falls like raindrops from the sky. Here is a living proof of the principle Ik Ong Kar — there is One Creator Who has created this creation. Here the vision of Guru Ram Das Ji, the fourth Nanak, is continually fulfilled. In his state of expanded consciousness, Guru Ram Das perceived a house of prayer, where all could come and lay their burdens down. He perceived the wounds of all souls and through God’s Grace alone, built a tank of nectar, Ram Das Sarovar, for all to share.

Modern science cannot fathom the effects of faith. When cancer threatens to overcome the body, doctors resort to the scalpel, and give no encouragement to prayer. And when faith in God and Guru bears fruit they are utterly astonished. I was blessed with the opportunity to sip and dip at that sacred, holy tank, and the scars of past existences were cleansed from my body and soul.

Daily life is filled with many obstacles, and wounds from the past threaten to submerge our spirit at every turn. But we have the gift, the incredible blessing, to dip our souls in God’s mercy, to bring our battered consciousness to the threshold of the Amrit Sarovar, the nectar tank, where Grace is manifest through faith and true prayer can never be denied.

Oh my Lord, let me live my life ever at your feet.

Shakti Kaur was diagnosed in September, 1976 as exhibiting preliminary signs of cancer. In April, 1977 she was surgically treated for cancer. In June of the same year she was again exhibiting cancerous growth. Five months later, after returning from the House of Guru Ram Das, the sacred Harimandir Sahib in Amritsar, India, test results showed no sign of cancer, but rather a very healthy, normal human being.