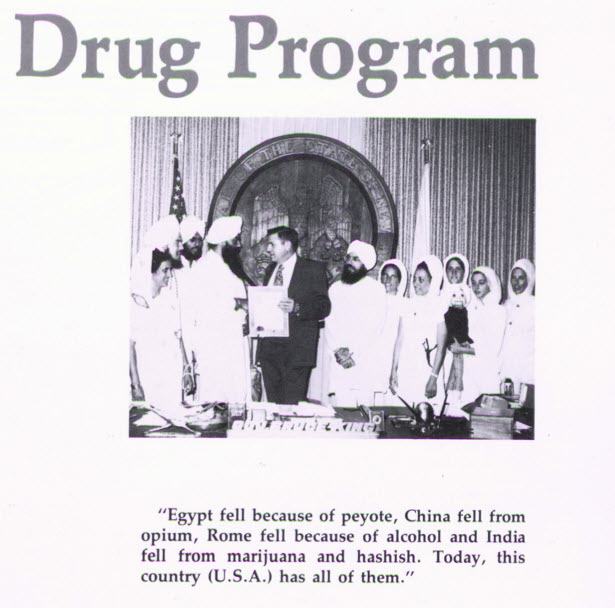 This passage, written by Gurubanda Singh Khalsa from Pomona, California, was shared in the “Drug Program” section of the book, The Man Called the Siri Singh Sahib, published in 1979:

When Yogi Bhajan came to America in 1968, he found his most avid audience among the disaffected youth of the time – the so-called ‘hippies’ who had abandoned their homes, their schools, and their jobs, who had rejected the traditional mores of their culture, and who sought new meaning in life through self-exploration, often times in drugs.  Yogijii understood their quest for inner knowledge, and he also understood the debilitating consequences of their intoxicating substances which they were using.  Master of the knowledge of the self, he offered them a new hope and a new challenge: “I can show you a permanent high- not the temporary high of pills and drugs, but the permanent high of meditation.”  Thousands of young people responded and left behind the life of drugs forever.

It was not only the disaffected youth who were involved in drugs.  America was becoming a drug-ridden society, with young and old, rich and poor alike turning for mental and emotional support and stimulation to a variety of drugs from caffeine to cocaine.  He saw the serious implications of this upon the future of America, and the future of the world.  “The one hope of the world is that the U.S. is a free country, a democratic country, with a high standard of living. If the U.S. goes the drug way, forget it.”

He identified the causes of drug dependence in America.  “America, he said “is a credit economy.  This creates pressure on the nerves and when one does not know how to relax, one turns to drugs, alcohol and smoking.”  He also knew that a major cause of drug abuse was the depression and insecurity due to the decay of the American Family and the erosion of the institution of marriage.  “We must build a drug free nation if we are to survive, and we must go into the root cause of drug use – a broken unhappy home.”

What is significant is that he had real solutions for these problems.  While the Federal Government was spending vast sums of money on methadone treatment programs which merely substituted one powerful addiction for another, Yogiji was teaching people how to free themselves from tension and anxiety through conscious self-relaxation and meditation.  He was teaching them how to rid their bodies of toxins accumulated through the years of drug abuse by means of Kundalini Yoga kriyas and diet, and how to live secure, fulfilling lives by adopting a lifestyle based on love, mutual support and commitment.

In 1971, he called for the establishment of the first 3HO Drug Program in Washington D.C., “under the noise of the government.”  The program began with two patients and was under strict medical supervision: one man was forty-eight years old and had a lifetime of inner-city drug use behind him; the other man, age twenty –two, had been addicted to heroin for three years and methadone for two.  Within three weeks, both men were “clean.”

Then in 1973 a similar program was initiated in Toronto, backed by a $100,000 Canadian Government grant.  Yogi Bhajan personally flew to Toronto to assist in initiation of the project.  Not only was the initial program a great success, but through it was born the Kundalini Yoga and Healing Arts Center, through which thousands of people have been able to free themselves of addictions and to learn to help others to live fruitful, drug-free lives.

A state funded 3HO Drug Treatment Program in Española, New Mexico was followed by the establishment of a highly successful program in Tucson, Arizona in 1975.  The Tucson program, which received support from both state and federal agencies, has captured national interest and won recognition as the first fully accredited hospital in which natural healing detoxification and rehabilitation methods are employed.  Following is a description of this landmark program which was inspired by Yogi Bhajan.