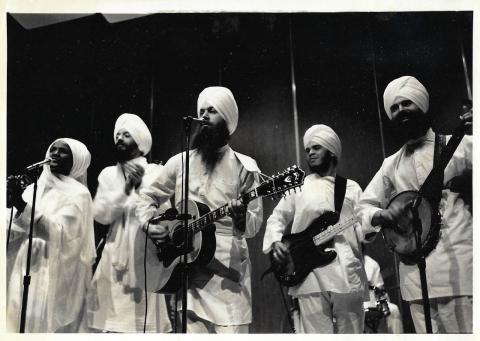 This fun song is an old favorite and was recorded by The Khalsa String Band in 1974. It tells the story of Captain Karma and how he shows up in our lives.

Lyrics and music by Gurushabad Singh

They call him Captain Karma; he’s the Lord’s own right hand man,

He’s the one who puts that worm in the apple that you steal from the fruit stand.

He shoots straight from the hip.

If you can’t stand no trouble from The Man, watch your mind and watch your lip.

Now, the Captain went down the street one day,

Makin’ sure the parkin’ meters worked all right,

And he stepped into a bar to see the bully lost the fight.

Now he’s boppin’ down the alley making floods in the valley,

He’s the trick in your knee, he’s the stinger in the bee,

And he ain’t too busy for you.

You think a man’s never walked that tall.

But the ol’ Captain knows the ego you’re trapped in, pride goeth before a fall.

Now the highest of the high can come back next time as the world’s lowliest creature,

Don’t stomp any more of them roaches on the floor; they’re all former spiritual teachers.

He never spares the rod when you mess up on the job; he’s the one who gets you canned.

Now you just can’t stop that old cosmic cop when the warrant’s out on you.

There’s no place you can hide; the man’s a bona fide detective for the Wha Guru.

Now some folks say about the Captain, that he works in strange ways.

So don’t blame this guy when trouble comes from the sky,

He just does what the Lord wills.

The Guru’s your protector when you meet the Collector, say “Sat Nam” and pay your bill.

The Guru’s your protector when you meet the Collector, say “Sat Nam” and pay your bill.