Home › Experiences › Our Stories › Crown Yourself! 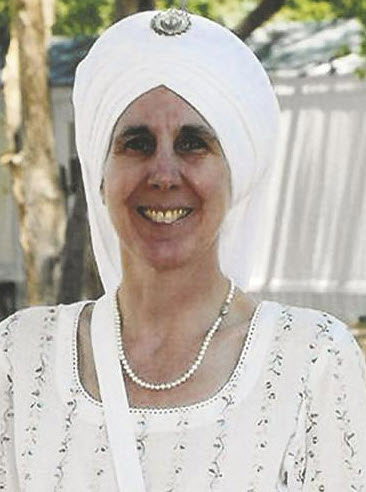 Sat nam. Today is Baisakhi 2013, and my heartfelt wishes that you feel renewed and strengthened with the Radiance of Guru Gobind Singh and the blessings of the Panj Piaray, the Five Beloved Ones.

So, I just found out that April 13 was International Turban Day. Is that cool or what, honoring the turban? I remember a lecture years ago by Siri Singh Sahib Yogi Bhajan, he said over half the world’s people cover their heads.  I thought about it, and for many, it’s cultural or practical. For example, one cannot live in the Arabian deserts without covering one’s head for protection from heat and sun.

So why do Sikhs wear turbans?

When I was just starting out on the Sikh path in 1988, I was doing seva at Khalsa Council in Florida. For some reason I don’t recall, I was driving a young teenage woman somewhere. She was then under very direct care of the Siri Singh Sahib. As part of the conversation, I asked her why we wear turbans. She told me that Siri Singh Sahib says when a woman wraps a turban around her head every day, she crowns herself. She tells the world that she does not have a price. It was some years later during a Khalsa Women’s Training Camp in 1994 that I heard him say it again in an evening lecture.

But I lived and worked in Washington DC back then. I was the only Sikh like me downtown. I learned quickly if I was going to keep this path, I would need a turban to support me. I constantly had validation, however. An Italian man on the street looked at me and said: “que bella” (how beautiful). A Salvadoran peasant got up from his seat on a full bus the moment I got on, motioning for me to sit. A Chinese grocer told me I was more beautiful than a model. Sikh cab drivers refused to let me pay them, and often would pull over and ask me if I needed a ride somewhere.

The Brothers in the parks never harassed me—many thought I was Muslim, but what was important is that I was fearless crossing a crowded park of under-employed young men because I wore a turban. I thought a lot about this; it’s not hard for a single woman to get unwanted male attention in Washington DC (I was a lot younger then too!). But what did I look like to them? I didn’t look like their mother, their wife or lover, their sister or their daughter. I did look like a nun, a priestess, a goddess, or a genie (so the young girls said), and perhaps on a windy day I looked angelic. All of these are archetypes. My point is that every stereotype that men usually connect to women was not what I looked like. So, they didn’t harass me and generally treated me with kindness and respect.

It did not take long for me to feel naked without something on my head, and to this day I do not go out of the house without a head cover on. But without question the full projection of a turban graced by a chuni and Adi Shakti pin deliver. The tough part is following up on the projection with kindness and compassion. This is the challenge of daily life.

One of my best turban validations was this. On a crowded bus and in a bad mood, I saw two fresh-off-the-boat Indian Sikhs get on, husband and wife. The man looked at me and said, “Sat Siri Akal.” I responded and he said, “You are Sikh?” like he couldn’t believe it. I said “Yes, I am Sikh.” I was wearing a large Adi Shakti pin so there was no mistaking my identity. He then asked, “Your husband is Sikh?” At that point, I looked at him and said with conviction, “No sir. I am not married. I am Sikh because I choose to be.” Well, his jaw dropped. And why that moment was so memorable is because I knew then that a lot of Sikhs came to Washington and believed that to get work, they could not look Sikh or wear a turban. And I knew he’d take that moment back to his Sangat. If a single, white American woman can wear the form of a Sikh in downtown Washington DC, then anyone can.

One day I heard someone ask my Indian Sikh friends why we wear turbans. The answer was a simple: “because our Guru gave it to us.” On that first Baisakhi Day Guru Gobind Singh gave us the bana, the form of the Sikh. He taught us to dress like Royalty—in those days only royalty wore full turbans. For a people made up of all the castes, this was revolutionary indeed.  This is, I think, the most elegant answer to why Sikhs wear turbans. Because our Guru gave it to us. He crowned us in his image. What’s not to love?

Home › Experiences › Our Stories › Crown Yourself!