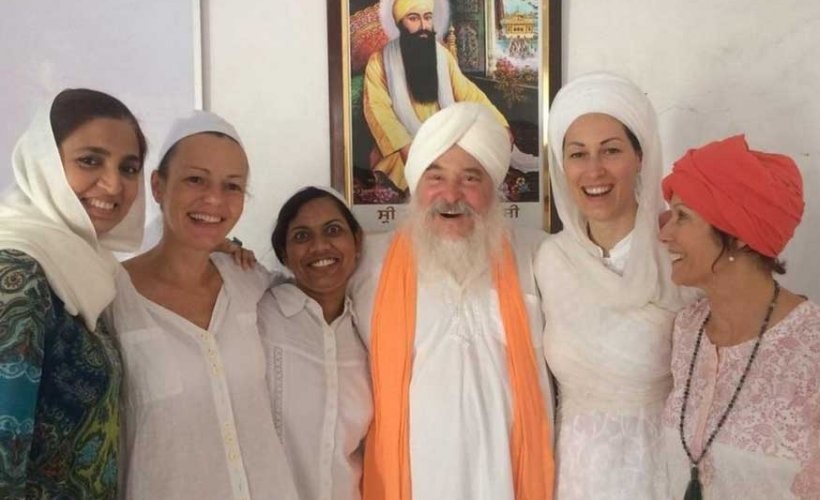 In 1889 Rudyard Kipling wrote: “Oh, East is East, and West is West, and never the twain shall meet, Till Earth and Sky stand presently at God’s great Judgment Seat.” Well, I’m here to testify that he was wrong. His Victorian mindset could not foresee the miracles that are happening right now in the 21st century.

When the British conquered India, little did they know that India had actually conquered them. They came home to Britain bringing kakis, curries and paisleys with them. India culture and mysticism became a permanent part of Western culture. Though considered quaint and exotic at the time, the fascination with all things Indian was actually much, much more than that.

Earlier British explorers of consciousness such as William James (The Varieties of Religious Experience, 1902) through Aldous Huxley (The Doors of Perception, 1954 and Island, 1962) served as pathfinders for the full flowering of the 1960s.

Into that flowering came Harbhajan Singh Khalsa, Yogi, along with many other teachers, bringing the ancient Indian technologies for raising one’s consciousness without drugs. 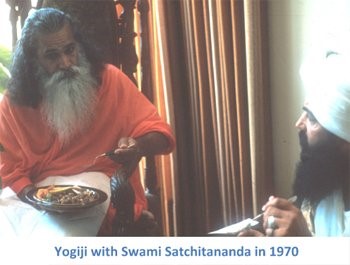 I met Yogiji in 1971 and became one of the first 20 teachers he sent out to head ashrams around the world.  One of the very first things I remember him saying was “If you want to worship someone’s lotus feet, go follow Swami Satchitananda. I am not looking for students. I came here to create teachers who can stand on their own two lotus feet.”

From those early seeds sprouted over 20,000 teachers teaching all over the world today and that number is growing rapidly.

Yogiji gave us many gifts, but the greatest gift he gave us was to bring us to the Siri Guru Granth Sahib. For many of us, our relationship with the Guru grew quickly. I think that is because many of us were His Sikhs in a previous birth, but whatever the reason, once that love grew in our hearts we knew without a doubt that we belonged to Him. I was blessed to receive Guru Ji’s Amrit in 1972 from the hands of the first Panj Piyare that came to American soil to perform the Amrit Sanchar here, the Sant Miyan Singh Jatha.

Even in those early days, tears came to Yogiji’s eyes as he told us: “So many Sikhs have suffered and given their lives to carry the Guru on their heads and deliver Him to us today. We have a debt to repay to them.” His dream was that one day we could go to the Punjab and bring these teachings back to those living in the villages that are in pain and suffering there to help them to elevate themselves and assuage their pain. 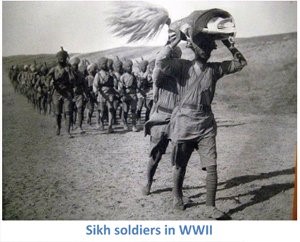 Just two weeks ago I returned from Amritsar where I was blessed to serve as a teacher in the first public Kundalini Yoga Teacher Training ever offered in India outside of Miri Piri Academy.

This training is designed to give students a sufficient set of skills to lead yoga classes themselves so that they can begin to serve in spreading these skills to strengthen the body’s systems and deepen their own awareness. The meditations increase sensitivity and help the Naam to settle in the heart and begin to grow there. These techniques are being used for drug de-addiction and teachers are being trained specifically to do that.

By the Guru’s blessing we now have a lovely new yoga center in Amritsar just a three minute walk from the Golden Temple. This is where we held the teacher training. Since the full training takes a month, we split it into three modules. The first was taught in December-January, the second was just completed in April and the final module will be taught in August. To find out more visit the Kundalini Yoga Level 1 Teacher Training Web site. 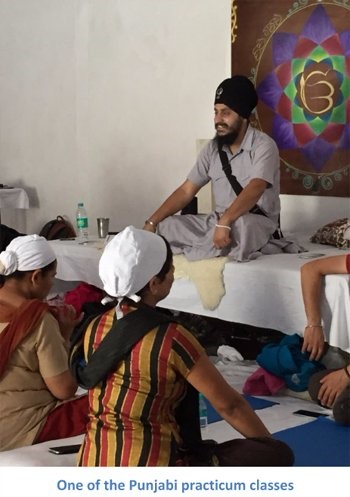 Everyone involved in this training gave their time as seva so that the course could be provided at the lowest cost possible. This enabled many local Punjabi students to attend. Along with 13 Indian residents we had nine students from China, seven from Europe and two from Russia.

The new yoga center has its own Gurdwara attached along with limited housing for students.  Every day our meals were cooked up on the roof of the center by a crack team of devoted cooks who provided nutritious and delicious langar for us every day.  The meals were cooked with a lot of love which showed through and elevated everyone who was blessed to partake.

Of course, since the teaching was conducted in English and we had Punjabi speakers, Chinese speakers and German speakers. There were three simultaneous translators who served tirelessly translating for each group of students. I just want to extend my heartfelt thanks to all those who translated for us. Thank you so much for your seva.

Morning Sadhana began with receiving darshan at Darbar Sahib followed by yoga, meditation and Gurdwara at the yoga center. After sadhana, a light breakfast of fresh fruit and porridge was served. Morning class began at 9:00. I taught in the mornings from 9:00 – 13:00 whereupon the midday meal was served. The students rested a bit after langar and the afternoon classes were conducted from 14:30-17:30 though they often ran later. Pritpal Kaur taught in the afternoons. The evening programs varied. One day we had a wonderful local children’s gatka team come over for a rousing demonstration of their skills. Often local visitors would come and join us.

During the entire course we were served silently and selflessly by Parvinder Singh, a local Amritsari who also served at Miri Piri Academy for ten years as Gurmat instructor there. Parvinder Singh was an angelic presence among us. His grace and selfless service touched the hearts of everyone blessed to be there. Not only did he serve everyone, but he took the training himself and was present for every class, participating fully and enthusiastically.

On the final day of the course, we installed the Guru in the main classroom for a beautiful closing Gurdwara service for which many guests joined us to celebrate.

Some of the local Indian residents who took the course talked to me enthusiastically about bringing what they learned to their work in Punjabi villages. One of them works with widows and orphans and the other works with physically and mentally challenged children. They both told me that many of the techniques they learned would be extremely useful in their work and they talked to me about specific children and what might be best for them.

All in all, it was a deeply inspiring experience for me personally to be at the Golden Temple in the amrit vela and spend the day with this amazing group of bright and beautiful student teachers. This first Teacher Training in India is truly a historical event. These teachings came to us in the West from India and after thousands of years the West has returned to the source and shared them with today’s new teachers. Every one of these students has come home with me in my heart. Waheguru!