First Meeting With The Master! 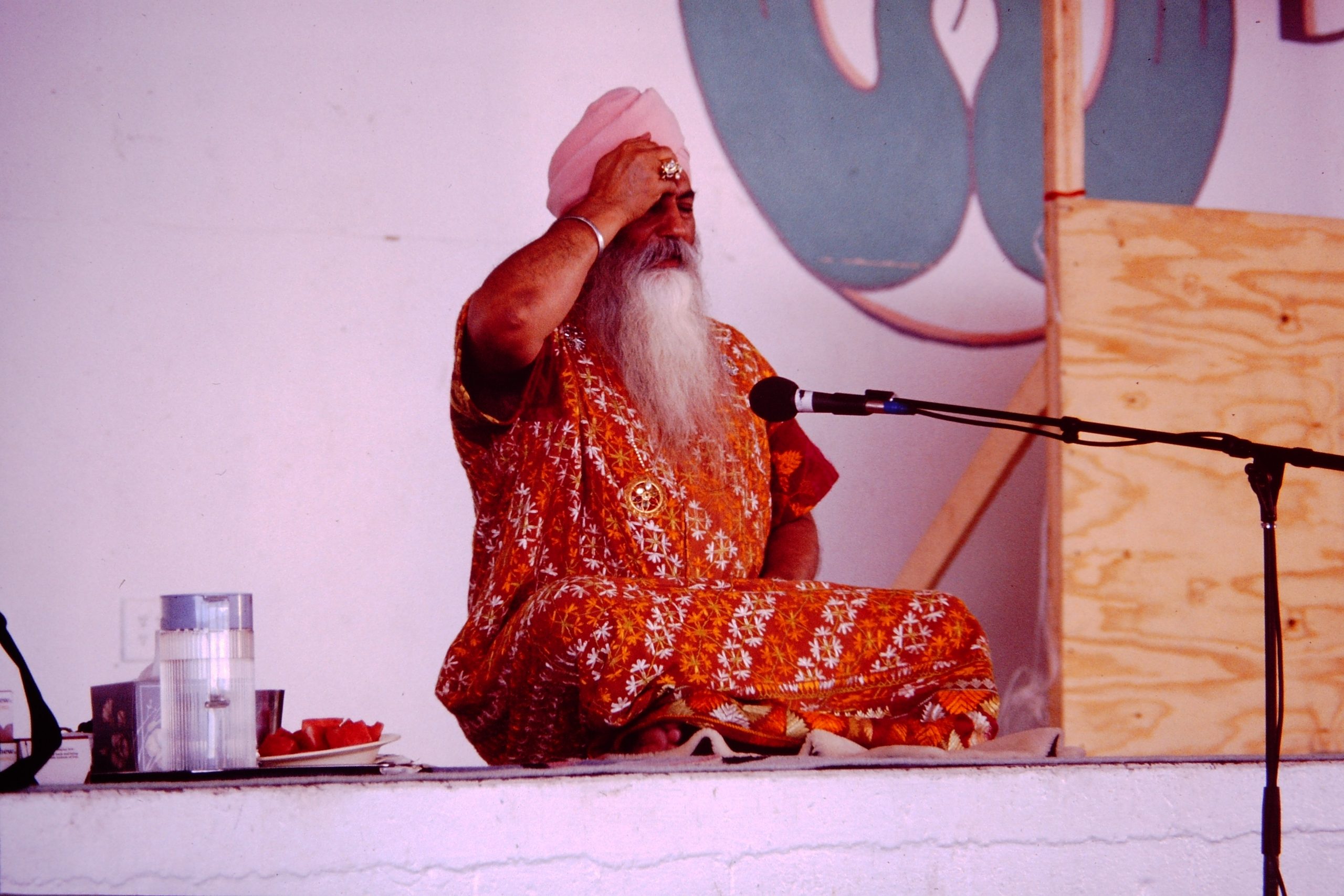 The first time Yogi Bhajan came to Kansas City to teach a weekend of White Tantric must have been in 1977. We were still in the house on Forest Ave. One of our yeoman ashram members, Siri Khalsa, was just installing new carpeting on the stairway up to what would be his residence during his stay. Sat Simran Kaur took one look and gently guided Yogi Bhajan back out the front door to “shop”, while the job was finished.

The course was held at a site just off the Country Club Plaza, a luxury shopping area. The site was the Community Christian Church, which was designed but not actually built by Frank Lloyd Wright. Yogiji took full advantage of the unusual interior layout of worm-like interior hallways, skylights and abrupt turns typical of Wright’s iconic designs to make the course a little bit different from all the ones I subsequently attended. For example, at the end of one exercise (don’t ask for a description because I couldn’t tell you, which is typical of my recall of any of the White Tantrics I have attended), he instructed that all the men, and men only, had to RUN to a bathroom and pee. I can tell you that I had no urge to “pee” as I later confirmed with some of the other males present. But when we got to a bathroom, the urge was overpowering!

But I digress.  In one particular exercise that Saturday afternoon, I distinctly remember it being sunlit with the autumn afternoon sun slanting in the high windows of the Tantric room. He had us standing, facing our partners. At that time, I considered my partner a “date” from the local Sufi community. Our upper bodies had to be angled towards each other with our hands flat together across the line. Apparently, my inability to get it right stuck out in the crowd of about 200 pairs of hands raised in front of him. He did something I never saw him do again in all my succeeding years of attending White Tantric Yoga sessions with him. He came down the aisle where I stood, about in the middle of a forest of yogis. Slapped me gently on my back behind my heart center and equally as gently pressed in on my navel point. He got me to the right angle and then walked away back to his seat on the stage. He mentioned something about Kansas City being “a spaghetti factory” which I attributed to my heritage as half Italian.

I think truly from that moment, what was later to be properly identified to me as The Master’s Touch, sealed my destiny as the student of a master. No one else had ever made such sense to me. No one else explained the science of Yoga to me so precisely. Before that I had practiced Kundalini Yoga because it was fun. But now I got higher than I knew I had ever been with the drugs I had imbibed, inhaled, chewed on or drank. His words stretched out my destiny and perceptions so far and so wide, that my earlier vow, before meeting him, that I would spend a year or so in Sat Tirath Ashram, learn “stuff” and move on to the next stage in my life was in ashes. I didn’t know then, as I know now, that I was planted there for a reason.

I had run into Kundalini Yogis about nine months before on a California highway. The yellow school bus that ferried Phoenix yogis from the ashram there to L.A. for classes with Yogiji was stuck by the side of the road. There they were, shaktimen in turbans and beards and shaktis also in turbans, but with chunis. They were just sitting there, content to wait. I looked up from my 1947 Chevy pickup. They looked too content in their situation– the bus hood slanted up, but no one attending. I think they were chanting. I thought it was kind of strange and declined to get further involved with this odd crew.

When I returned home to the small California commune I lived in and told the story, one guy gave me a comical imitation, jerking his head and shoulders around in random directions while sniffing through his nose. “Oh yeah” he said, “that’s the yogi’s folks.  They do Breath of Fire!”

I tried to get a personal meeting with him the day after that first White Tantric “meeting”, but I was at the end of a long line of folks seeking his counsel. My question—should I move into the ashram and practice sadhana every day as he had advised in his talks.

Of course, I finally decided, I should move into the Sat Tirath Ashram! What better way could I spend my life than to follow the instructions of a very wise man. I was to live as a yogi, as a householder, as a teacher and as a husband to a woman I was to know only a few actual days before we were married amongst a crowd of eight other couples at Winter Solstice a year later. It all made perfect sense then and still does now.