A firsthand account of the early days of 3HO, the Healthy, Happy, Holy Organization, according to Guru Singh Khalsa, as shared on harisingh.com and 3HO.org.

It is the brightest fire of the year, June 21; the longest day; the shortest night; a time spiritual communities have celebrated for thousands of years. This is the Summer Solstice Sadhana, and in June of 1969 3HO began its now decades old tradition of gathering from all over the world for celebrating with Kundalini Yoga, meditation, and White Tantra Yoga.

The full story of our tradition actually begins the summer before. It was June of 1968, I had just returned to Espanola, New Mexico, from a year of studying healing music in Michoacan, Mexico. A flyer hanging in the local Safeway store read: “A Gathering of the Tribes, June 21, 1968, in Aspen Meadows near Santa Fe, sponsored by the Juke Savages, the Hog Farm, Ken Kesey, and The Merry Pranksters, featuring the Grateful Dead.” These were all friends of mine from San Francisco so I made the trip up those mountains. 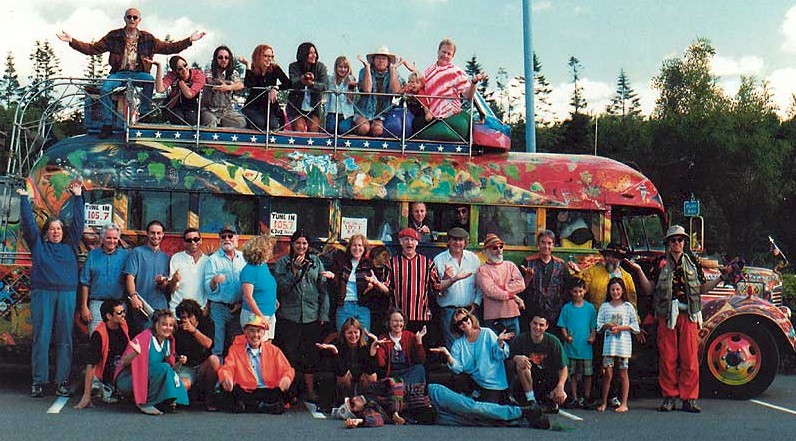 Over a thousand people gathered. It was so wonderful that we decided to meet again at Winter Solstice Sadhana in Los Angeles, where an extraordinary event added to the significance of being in L. A. Another poster caught our attention in early January, 1969, this time in a health food store. The poster read: “Yogi Bhajan teaching at the East West Cultural Center.” 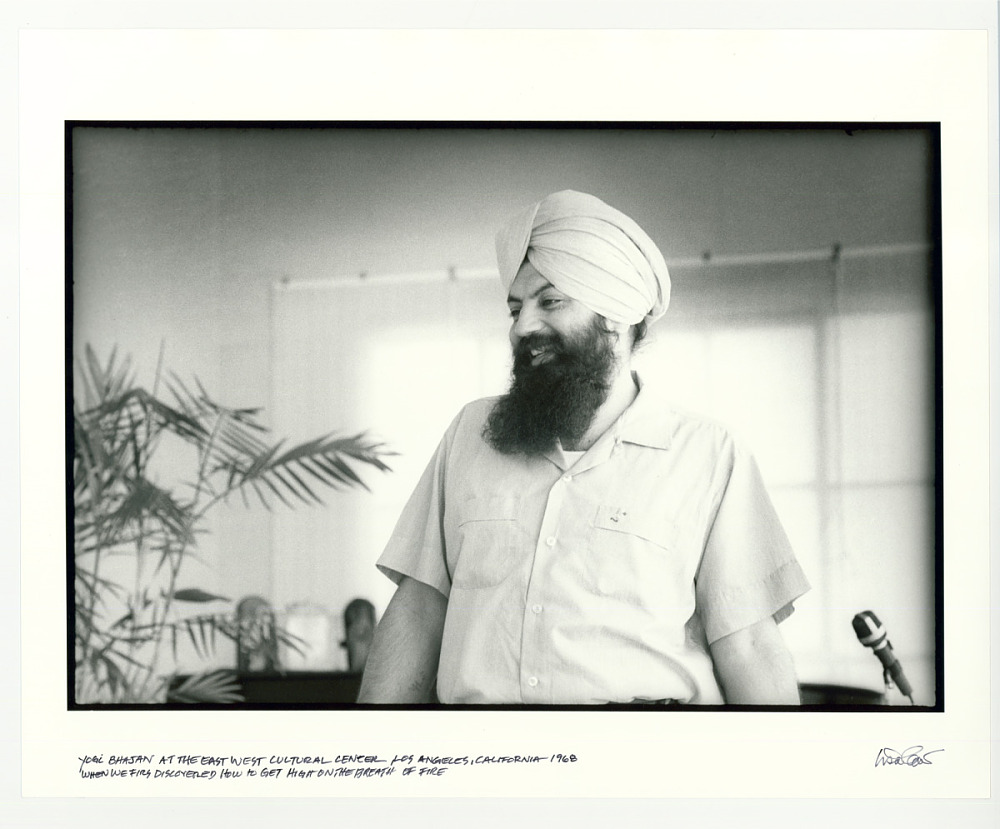 Yogi Bhajan at the East West Cultural Center, Los Angeles, CA, 1968. When we first discovered how to get high on the breath of fire. Photo credit: National Museum of American HistoryAbout two hundred of us drove to the class in a group that would soon form the nucleus of 3HO’s original students: dozens of members of the Juke Savage performance group, the Hog Farm commune, and The Committee situation comedy collective. It was not our idea to stay long in Los Angeles, but Yogi Bhajan inspired us all to remain for the Winter and long beyond early Spring, as he taught two phenomenal classes every day except Sunday. 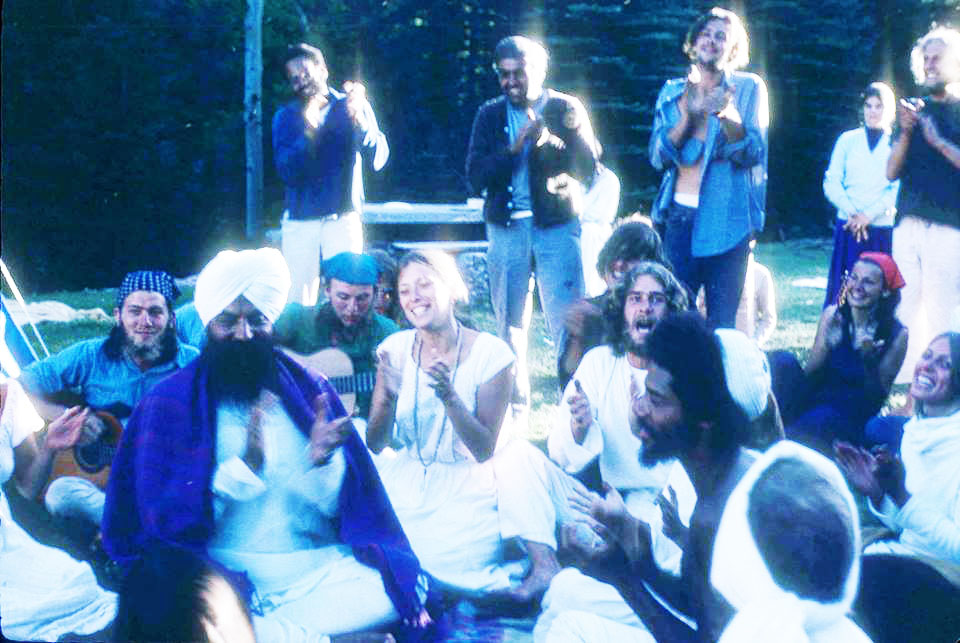 When May returned, our lingering memories of the previous Summer Solstice Sadhana returned so strongly, we invited Yogiji and everyone else to come to the mountains in New Mexico, the Land of Enchantment. A ragtag caravan of cars, trucks, and buses left from Los Angeles to cross the southwestern deserts to the Aspen Meadows above Santa Fe. At this time in our community’s evolution, we were few, but this would soon change as our enthusiastic innocence attracted several hundred more young people living around New Mexico to our gathering. Yogi Bhajan fell in love with the children, the land, and the “enchanted” State and from this first Summer Solstice Sadhana gathering, he established a center in Santa Fe. As word spread that such a teacher and technology was in town, students arrived in large numbers. 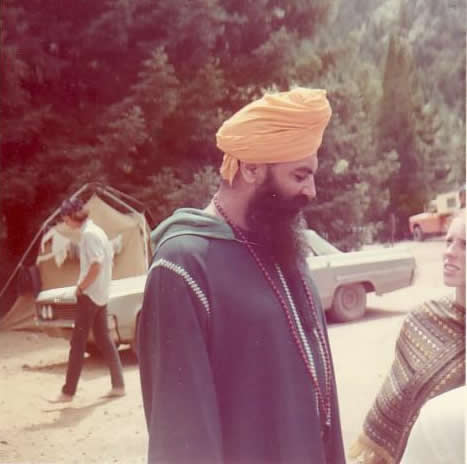 In addition to Kundalini Yoga classes, one of most outstanding events at our first 3HO Solstice Sadhana was the now famous school bus race. As Yogiji stood at the starter’s position — a homemade checkered flag rose above his salmon-colored turban and he waved it wildly to indicate the start of the race. Enveloped in the largest cloud of New Mexico dust anyone could imagine, he emerged coughing, sputtering, and laughing from the middle of spurting diesel buses speeding down the meadow of our makeshift racecourse. Later that evening, in the teepee Yogiji was staying in, the inspired conversation twisted and turned through tall tales and cosmic commentary, ending in the initial planning for Woodstock, the colossal music festival to take place later that summer. Two months later, the reality was half a million people doing Kundalini Yoga and listening to the world’s best rock bands on a farm in Woodstock, New York. Many of 3HO’s early members came from this gathering. 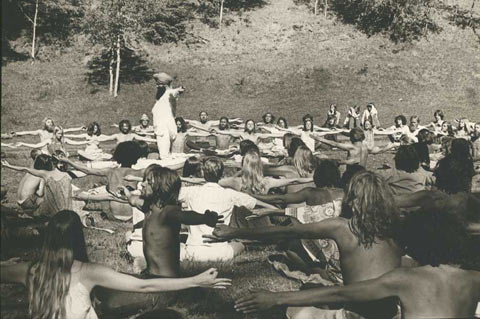 With this and other events, our 3HO family was growing too large for Aspen Meadows, so for Summer Solstice Sadhana 1970 we gathered in a dry arroyo on the Santa Clara Indian Reservation just outside of Espanola. Bruce King, running his first campaign for Governor of New Mexico, came to visit our campsite. Now a great friend, he loves to tell the story of how he predicted we “would never last a month in New Mexico.” (He is glad to have been completely wrong). 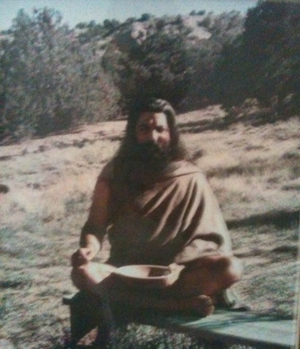 Watermelon was the food of the day and Yogiji would walk around with a huge bucket of ground black pepper to make certain each of us had plenty on our once delicious fruit. People would actually hide from his bucket, but he found us all. It was during this Solstice Sadhana we discovered the land that we now call Hacienda de Guru Ram Das — our 3HO and Dharmic headquarters in the Espanola Valley. 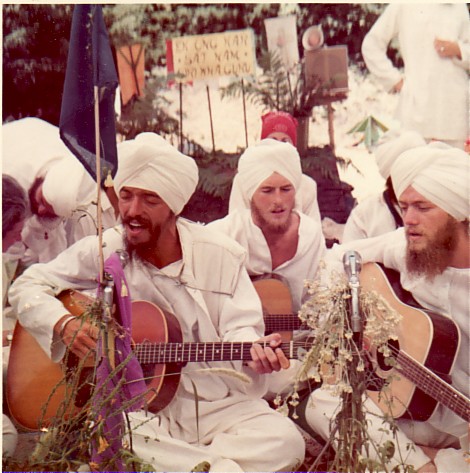 The following year, 1971, we ventured northward to Paonia, Colorado, a town of about 400 people, known for its cherry orchards. We camped on a mesa covered with groves of cherry and apricot trees and helped pick the fruit as part of our exchange. The highlight of this Solstice Sadhana was that Yogi Bhajan had now inherited the position of Mahan Tantric and the first Solstice Sadhana White Tantra Yoga course took place. 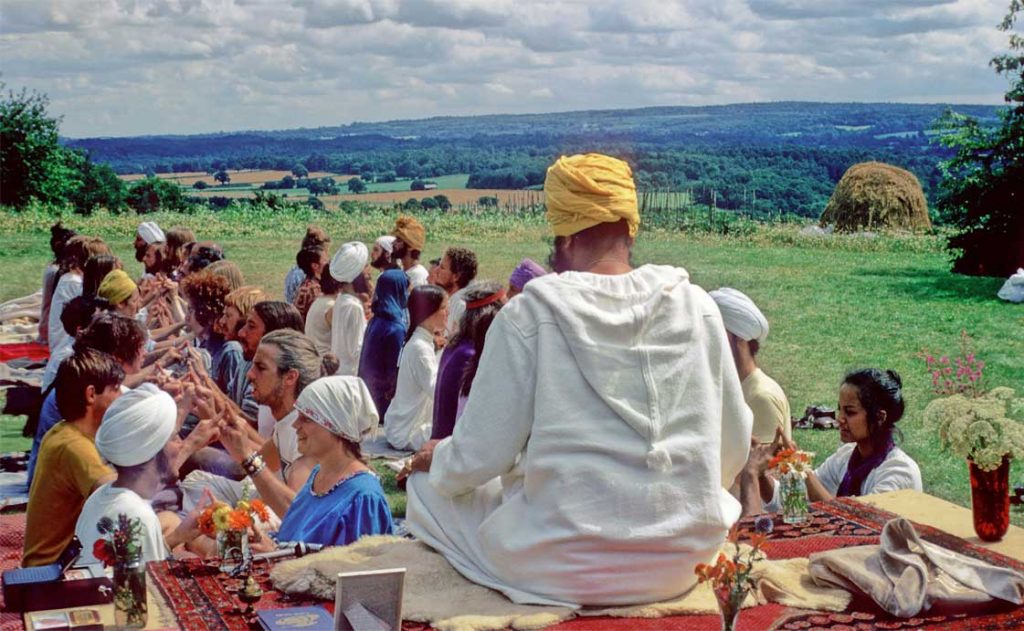 One of the most memorable exercises was to see how long each couple could hold focus and concentration without breaking. Yogiji set up a band of roving jokesters to get people to crack. If you failed this test, you joined the jokesters to challenge those who remained. The last couple held out for two hours and broke when someone got a shovel, thrust it between the couple, and yelled, “Can you dig it?”

This Solstice Sadhana had a unique bathing system of jumping into an irrigation ditch from which you could see the glaciers melting to feed it. You would then float two hundred yards to a low bridge where you needed help to stand; it was far too cold to do it on your own. 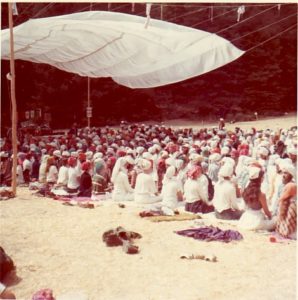 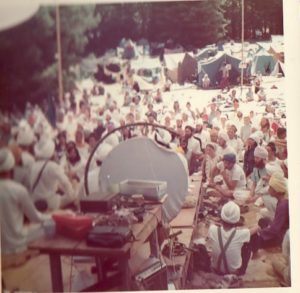 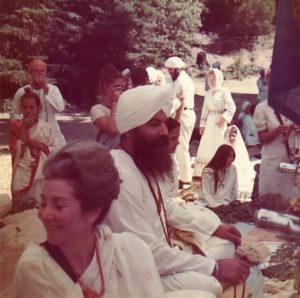 In 1972, we came west to Northern California’s Mendocino County with several additions to our ongoing Solstice tradition. It was here we first experienced parachute shade canopies, straw-bale ground cover, and Yogi Bhajan’s Solstice Diet. In addition to White Tantric Yoga, a highlight of this Solstice was the three-women-against-one-man-free-for-all Kabaddi contests. 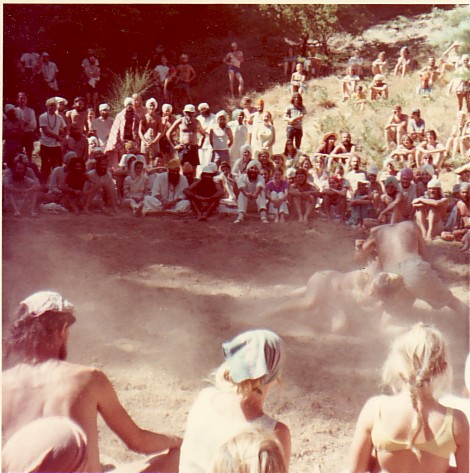 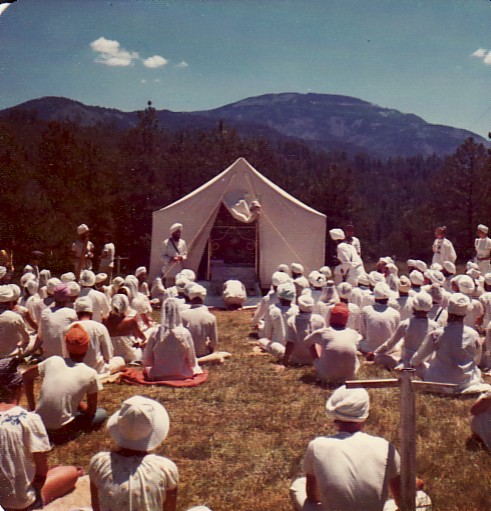 In 1973 and 1974, we moved back to New Mexico—Yogi Bhajan’s preferred location—to a Scout camp in the Jemez Mountains. Having seen several yatras to India by 1974, a curious group from the SGPC (including President Gurcharn Singh Tohra) came to see us in our own environment. The first Solstice Amrit ceremony took place at this camp. 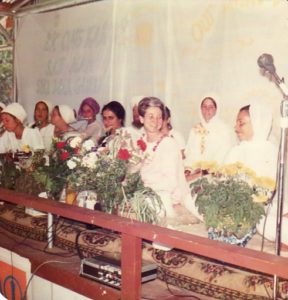 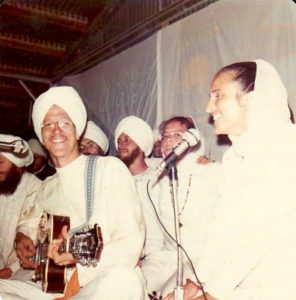 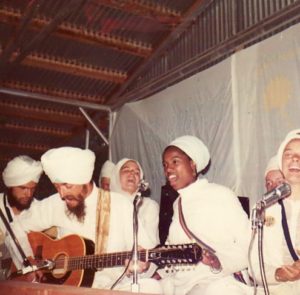 In 1977, our roving band of 3HO yogis finally found what has become our permanent home for annual gatherings: just outside of Espanola on 150 acres that Yogi Bhajan discovered by the Grace of Guru Ram Das—the land he named Ram Das Puri. Drilling 832 feet into the mountain, he found the water we would drink, but time was short and when everyone arrived, the only shelter set up was that old faithful system of parachute canopies and straw-bales. Sheepskins, socks, and blankets were always covered with straw when we packed our bags for home. A sacred land used for centuries by the local Pueblos Indians, we gathered our tribe as they had gathered theirs for centuries. 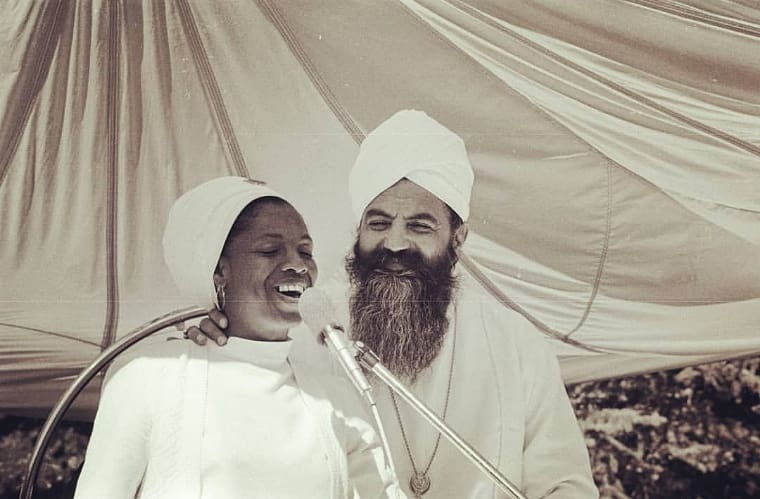 Krishna Kaur and Yogi Bhajan circa 1978

Over the next year, we built the first installment of our Tantric Shelter, a children’s camp, a Gurdwara and the beginnings of a fully functioning kitchen, plenty of flush toilets, and permanent tent-sites. In 1985 Yogi Bhajan inaugurated the first International Peace Prayer Day to focus our group energy on global peace. As the years have gone by, our children’s camps have grown, our facilities have improved, the numbers of students from all over the world have increased, and the message remains the same: Ram Das Puri, Home of the Khalsa, is the place to be when Summer Solstice rolls around. 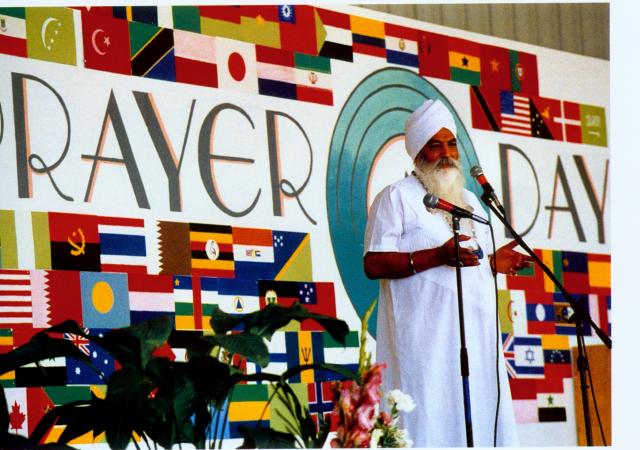