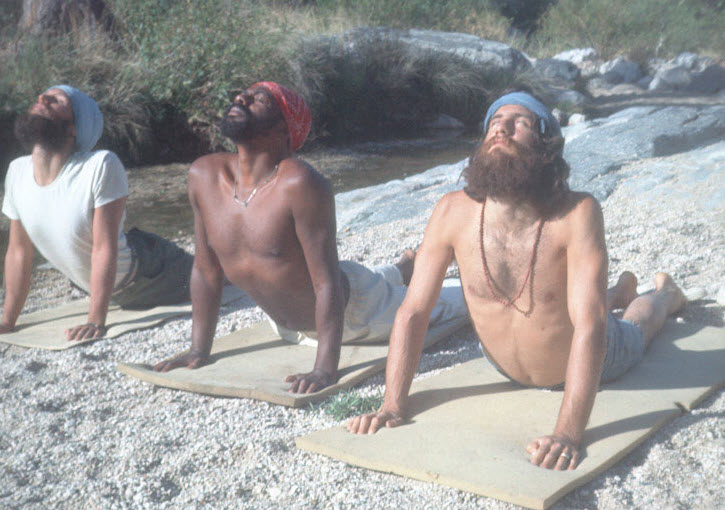 This passage, written by Sat Nam Singh Khalsa from Tucson, Arizona, US, was shared on page 416-418 of the “Drug Program” section of the book, The Man Called the Siri Singh Sahib, published in 1979:

The techniques used by communities of people living according to the laws of nature as long as forty thousand years ago are being rediscovered. They are now being referred to as “New Age Techniques” and are in use by organizations, like the 3HO Foundation, which make possible a holistic, natural approach to living within the fragmented and “un-natural” societies of the West.

We feel that our 3HO drug program must be studied as the prototype of future drug programs. There is no other natural healing detoxification and rehabilitation spiritual community in the country. It is in this community that we have helped so many clients not only become drug-free, but free of their old selves that caused them so much pain and suffering. The best programs have less than a ten percent success rate. Why is it that our program in Tucson, using techniques that are thousands of years old, has one of the highest rates of success in the country (over forty percent for the last fiscal year)?

We have seen human beings with drug problems undergo rapid healing. This healing has manifested itself in terms of changing skin color and texture due to the detoxification of the body, changes in language use, in posture, in willingness to relate to others’ needs before their own, in their increasing ability to cope with stress, and in general, a change in personality. We have witnessed people who came to us in very depressed, lonely, alienated, self-denigrating states leave with a glow on their faces. There is no question that many of the people who come here for help change their self-concepts drastically. More importantly we feel they have changed their level of awareness or consciousness which is what controls and determines thoughts, attitudes towards self and others, and behavior.

“Integration of one’s personality at higher levels is the outcome of balancing the physiological systems of the body with the mind and the spirit.” ~Yogi Bhajan, 1977

The assumption here is that a more self-actualized person, a more integrated person, a more enlightened person, a person who has learned to manifest and achieve his higher human potentialities will less likely become addicted to substances that restrict the use of this higher level of awareness or limit him directly because of legal and social sanctions. On the basis of this assumption, we have designed a program that can increase the possibility of a person with drug problems to experience “highs” of a different nature, “highs” which are produced by his own nervous system. He learns to become master of his own energy and fate. He learns self-control and therefore is well on his way to self-mastery.

Thus, our goal of treatment goes much further than just adjustment to the norms and values of society. We try to provide a way for the individual to pull himself up from the morass of the mundane in order to experience the potentialities of the Infinite. If it makes sense to look beyond drugs in treatment, then it makes sense as well to look beyond the return of drug use or abuse as the sole measure if effectiveness of a drug program.

A great strength of the program is the total change of environment. The environment is 180 degrees different from anything the client has known before, which allows him to leave behind his past and begin building a new self-concept and identity. His old habit patterns must be replaced by new. For example, there is no smoking, no drugs of any kind, no loud music, no pool games, no card games, and no T.V sets. There are no rooms with large numbers of magazines and newspapers to remind the clients of their pasts, or to inform them of what is happening outside the peaceful, healthy atmosphere which surrounds them.

The program is divided into three phases, each lasting approximately forty-five days. Phase One, the first forty-five days, is a period of intense physical cleansing and detoxification. This process is speeded up as a result of the nutritious, light diet and Kundalini Yoga. By following strictly vegetarian-fruitarian diet, poisons and toxins are eliminated from the body. In addition, these foods demand less energy for digestion, enabling the body to get more vitality from the food than it could with a heavier meat diet. On this diet the blood is thinner, allowing greater amounts of oxygen to reach the cells, tissues and organs, which results in a healthier body.

After the intense physical cleansing of the first phase, the client is moved on to Phase Two and begins to gain more privileges. He man begin to have outside visitors, receive phone calls and letters and read newspapers. With the discretion of the staff, he may be allowed to leave the center with ashram members, or even to work from time to time in the ashram businesses. Any money that he earns is placed in savings for the time when the client will graduate the program. Although these changes are taking place, basic daily schedules remain the same. If the client seems to be adjusting to his new schedule fairly well, then he will be moved on to the last phase, sometimes referred to as the Re-entry Phase.

In this phase more stress is placed on making plans for the future. The client begins to think about what he wishes to do with his life once he leaves the ashram. While still in this phase, he may be placed in a vocational school in order to learn a trade, he may return to high school or college to get a degree, he may work in an ashram business, or he may find a job outside the facility but continue to live within the community. This phase generally lasts from forty-five to ninety days, and during the last month of the program, the client will be carefully assessed and viewed in order to see how he adjusts to his increased involvement with the outside community.

When a client graduates, he agrees to follow an after-care plan for the next year. This follow-up care involves filling out a form every three months which contains a self-assessment and progress report. Other acquaintances are also asked to mail in assessments on the client. These can be written by the client’s doctor, minister, parole officer, parents, teachers, etc. Follow-up also includes attending two Kundalini Yoga Classes each week at this center or any of the 120 3HO centers in the United States.

Meditation also teaches a person to go within and become acquainted with himself. In this way he can learn to solve his own problems. We call this “counseling without counselors,” and feel that it is very important training, since the clients will not always have the program and its staff to help them solve their problems. Kundalini Yoga rebuilds the physical body, nutrition is important in maintaining health as well as cleansing the body of toxins and poisons, and the lifestyle involves living in a family situation with a constructive, positive and new vibration.

The 3HO Drug Program was devised and created to give people with drug problems an atmosphere and conditions with which to change old habit patterns to more rewarding patterns of behavior. Currently funded by the state of Arizona and the federal government through an umbrella agency in Tucson, it has become renowned in the field of drug detoxification and rehabilitation because of its high success rate (fifty percent, now), and has recently been approved by the Joint Commission on Accreditation of Hospitals and more and more people are beginning to recognize this program and its techniques as an outstanding alternative to most systems existing today which have very little success by comparison (two percent, generally).

We attribute that success to applying old age good sense to new age challenges and gratefully recognize Yogi Bhajan for selflessly and tirelessly sharing these techniques.