From Mantra, to Meditation, to Movement, to Mission 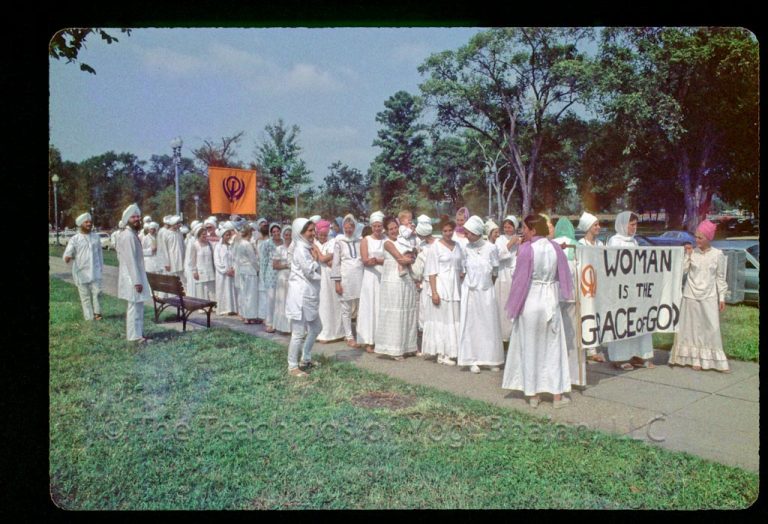 This article originally appeared in Beads of Truth in 1979, and was written by S.S. Shanti Shanti Kaur Khalsa

The history of the birth, growth and expansion of the Grace of God Movement of the Women of the World.

By practicing this meditation a woman’s manner of communication, her behavior, her thoughts, her personality and her projection are aligned more and more in harmony with the infinite beauty that this mantra unveils for her. The fears, limitations and the debilitating concepts that an exploitive society has placed on her can then be lifted. The Grace of God mantra gives woman the hope of real liberation and the fulfillment of human life.

On September 22, 1970 in San Francisco, California, a movement unique in the history of all humankind was begun. At that time Yogi Bhajan Ji first instructed women in the Grace of God Meditation. He also formed the Grace of God Movement of the Women of America (GGMWA) so that each woman might learn this meditation and relate to her highest potential. A handful of women comprised the Grace of God Movement’s early membership, but as these few women began to teach other women the Grace of God meditation, and as those women in turn taught others, the concepts and practical technology of human transformation and liberation began to spread. Yogiji continued to instruct, direct, guide and counsel women on the importance of their strength. inspiration and positive prayer. He reminded us that woman is the mother from which all mankind is born, that woman is the keeper of the home and the safeguard of human values. She has the power to give birth to the saints, sages and saviors of this earth. Therefore, woman MUST relate to her grace! She MUST live to her nobility! No matter what the duties of a woman may be, no matter what earthly position she may hold, no matter what responsibility she may carry, Yogiji reminded each woman of the spiritual trust the Creator gave her when her soul selected the body of a woman:

“As a female, as a woman, as a Grace of God, you can play a fundamental basic human role: To uplift humanity . . . A woman must learn from the very day she takes her first breath on this earth that she is the Grace of God.” 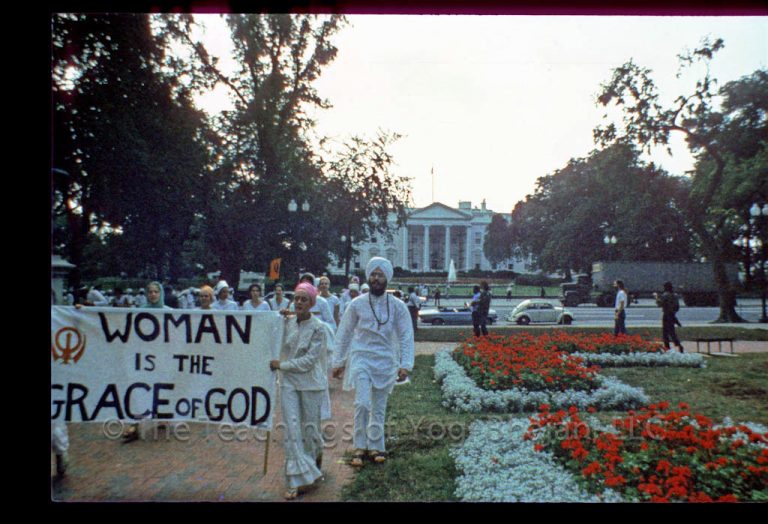 Yogiji did not omit the female polarity — the male —  when he instructed the meditation. With slight modifications, men can practice this divine meditation and share in its transformative, healing and uplifting grace. It is when the power of this meditation is applied with all the teachings of graceful living Yogi Bhajan has given us that the destiny of this nation and the entire planet can change towards a righteous goal.

December 4, 1971 marked the first public appearance of the Grace of God Movement of the Women of America, as nearly one hundred women and men marched in a candlelight procession past the topless and bottomless nightclubs of San Francisco. Since that time there have been other marches on behalf of the grace and dignity of women in Los Angeles, Washington, D.C., Tucson, Phoenix, etc.

This very cozy meditation brings into harmony and balance the areas of graceful, effective communication, the power of decision making, health and physical grace, patience to go through the test of one’s karma, the ability to channel emotion into devotion, the gift of divine wisdom and expansion, and the merging of the limited ego into the Divine will. This meditation can make a woman most effective in all areas of her life. 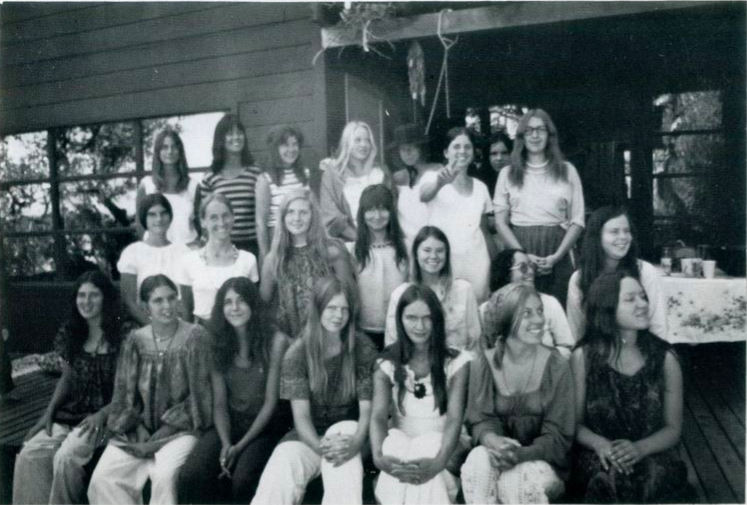 The movement’s brief history has shown that the effectiveness of GGM lies in personal communication. A woman learns about GGM from another woman! In order to let women know the wealth and value of the teachings Yogi Bhajan has given, many women have gone out into their communities and formed various classes, courses and workshops. These programs help to convey Yogiji’s message that: “Woman is a woman — nothing else — and nothing can replace it. Her nobility has nothing in comparison or parallel.”

The classes provide personal instruction in health and beauty care, yoga exercises and meditations that relate to woman’s unique physical and psychological make-up, diet and nutritional information, and male/female relationships. The Grace of God meditation was and continues to be the foundation for these women’s programs.

Soon after GGM began, special information packets filled with helpful hints in all these areas, plus transcripts of lectures relating to women, were prepared and distributed by 3HO Foundation International Headquarters. The First Grace of God Course was offered in the fall of 1972 in Tucson, Arizona, and by virtue of its success, the course was offered again in 1973.

In 1976 the first Khalsa Women’s Training Camp was held. For eight weeks in the sun, rain and (literally) earth of Espanola, New Mexico, women learned how to live together, work together, play together, plan and organize together, grow together. Through the daily experiences and the powerful lectures of Yogi Bhajan, the barriers of mistrust between women were being broken down. From chick to Golden Eagle — the American woman was emerging to confirm her grace!

He reaffirmed this in 1978 when he said: “It is my earnest desire, it is my desire with head and with heart both, that you all should become missionaries to spread the mission of the Grace of God. 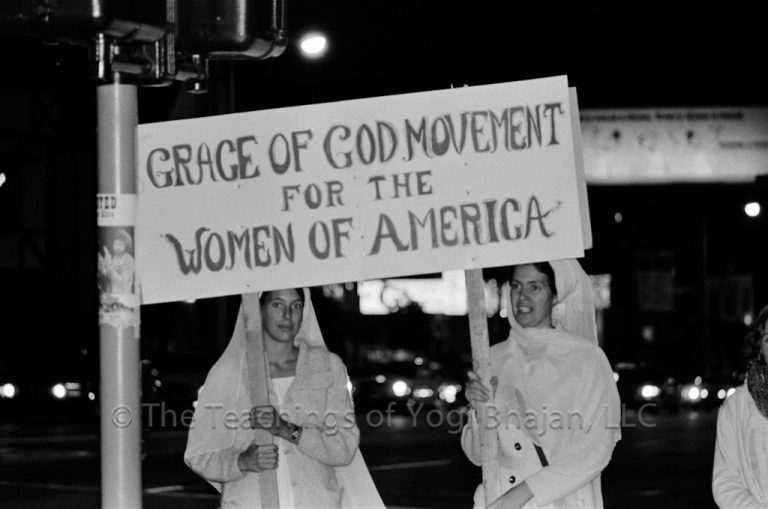 Taking his words to heart, we began to organize! Khalsa Women’s Training Camp 1977 provided an excellent forum for ideas, planning sessions and some sharing of “how-to” experience. From that session came the establishment of world wide monthly full moon meditations, regional and local GGM newsletters and courses, classes and more classes!

By 1978 it became clear that there was a need to consolidate, correlate, coordinate and communicate with all of our sisters who are serving to spread the Grace of God Movement of the Women of the World.

On October 7, 1978 plans for an International Council for GGMWW were outlined. The International Council is to be the planning, organizing and motivating energy behind the GGMWW programs. Already in the works are programs for standard curriculum outlines for various GGMWW classes, literature about GGMWW for distribution, weekend workshop programs and a prototype GGMWW booth for display at conventions and conferences. A resource questionnaire has been distributed to all women involved in GGMWW to assist the International Council in determining our collective skills, talents, interests and abilities.

As the Grace of God Movement for the Women of the World enters its ninth year, the guiding hand of the Siri Singh Sahib, which has brought us this far, continues to inspire the progress of this mission. “Wherever you are you should start making small groups of GGMWW and start doing your humble thing to build a country, to build a nation, to build a world….Rise, Oh woman, time has come. It will never come again.” 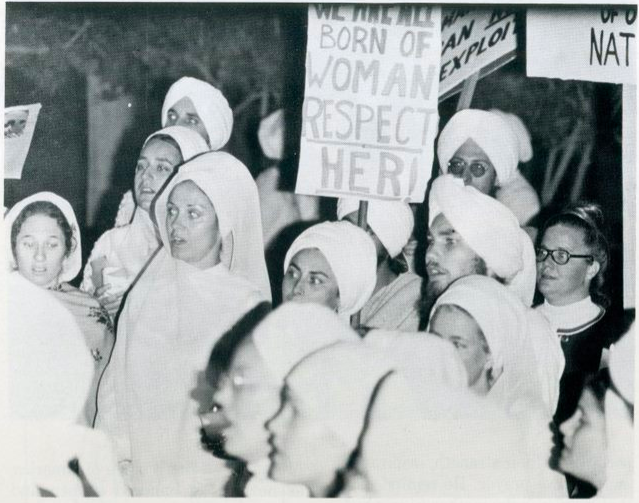 In 1975 the Grace of God Movement staged a march down Sunset Strip (home of nightclubs and strip joints) in Los Angeles, California to protest the exploitation of women.

View this article as it originally appeared in Beads of Truth in 1979.

View the instructions for the Grace of God Meditation.