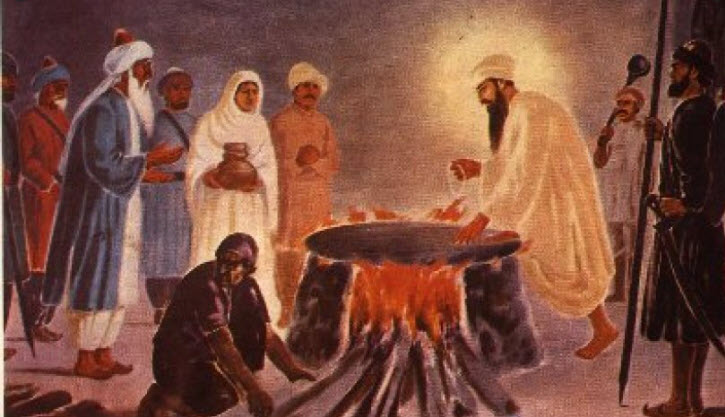 Sikh Dharma is the path of the householder. If you are going to “hold” that house you have to earn righteously and pay for it, work for it, feed the people inside, be the neighbors of other householders and therefore live in a community, which becomes a nation. As a family, as a community and as a nation you develop an identity, values, and beliefs. You take actions which are consistent with and which support your identity, values and beliefs.

At some point you must be challenged, tested to see if you are serious and committed to those values and beliefs or if you lack the commitment to ”walk your talk”  and your “teachings” are a sham.  Invariably what started as a meditation becomes a test of applied consciousness where the individual and the community are forced to weigh their identity, values and beliefs against the possibility of suffering, financial loss, imprisonment, torture and death- and decide what they are going to do.

Guru Arjan and his martyrdom provide for me guidance and a model for passing such a test.  During the Guruship of Guru Arjan many thousands of people heard the teachings of the Gurus and began to follow the teachings of Sikhism. This included not only Sikhs but also Hindus and Muslims, since truth can never be confined to a culture, region or ethnic identity.  Since money, property, and influence often accompany the power of the “church”, the Mughal clergy weren’t happy about the Guru’s growing influence.  They perceived it as an encroachment and reduction of their influence and power.

Following his father Akbar’s death Jahangir, the new Mughal emperor, saw an opportunity to destroy the Sikhs and the growing influence of the Guru. Jahangir, unlike his father, subscribed to the idea of turning the whole of India into an Islamic State. As a matter of economic and political expedience, a number of Hindus supported the Mughal Court. Having seen their own power base rapidly disappearing under the influence of Guru Arjan, they joined the Muslims in their efforts to destroy the Sikhs.

Jahangir and his minions brought the Guru “up on charges”, arguing that the Adi Granth defamed the Hindu and Muslim religions and that Khusrau, Jahangir’s son (whom many saw as a more fitting candidate for Emperor than Jahangir), had been financially aided by Guru Arjan.  Accordingly, in May 1606 Guru Arjan was arrested and brought to Lahore where he was subjected to severe torture.

As we sing in Gurdwara: “Guru Arjan gave his life to stand for what was right.  He was burned and tortured for five long days and nights.  He could have stopped it any time, just by giving in. His strength a solid wall, he never gave an inch at all.” (From “Song of the Khalsa”, by MSS Livtar Singh Khalsa). Various records reflect that Guru Arjan was made to sit on a burning hot plate and then in boiling water while red hot sand was poured over his head and body. When he was asked by his friend, Mian Mir, a Muslim saint, why he was allowing this torture to happen, Guru Arjan replied that he had to lead by example.

The Guru told him that people who stand for truth often have to suffer. He said, “I have to bear this pain with grace and dignity so that others when they meet similar adversity will have my example to guide and fortify them.”  As I reflect and meditate on Guru Arjan I am grateful for his sacrifice, grateful for the opportunity to receive the Guru’s wisdom into my heart, grateful for the opportunity to be in the company of the (Happy, Healthy and) Holy and grateful for the strength, wisdom, and courage I receive simply by reflecting on the example of Guru Arjan and those who have taught me and gone before me.