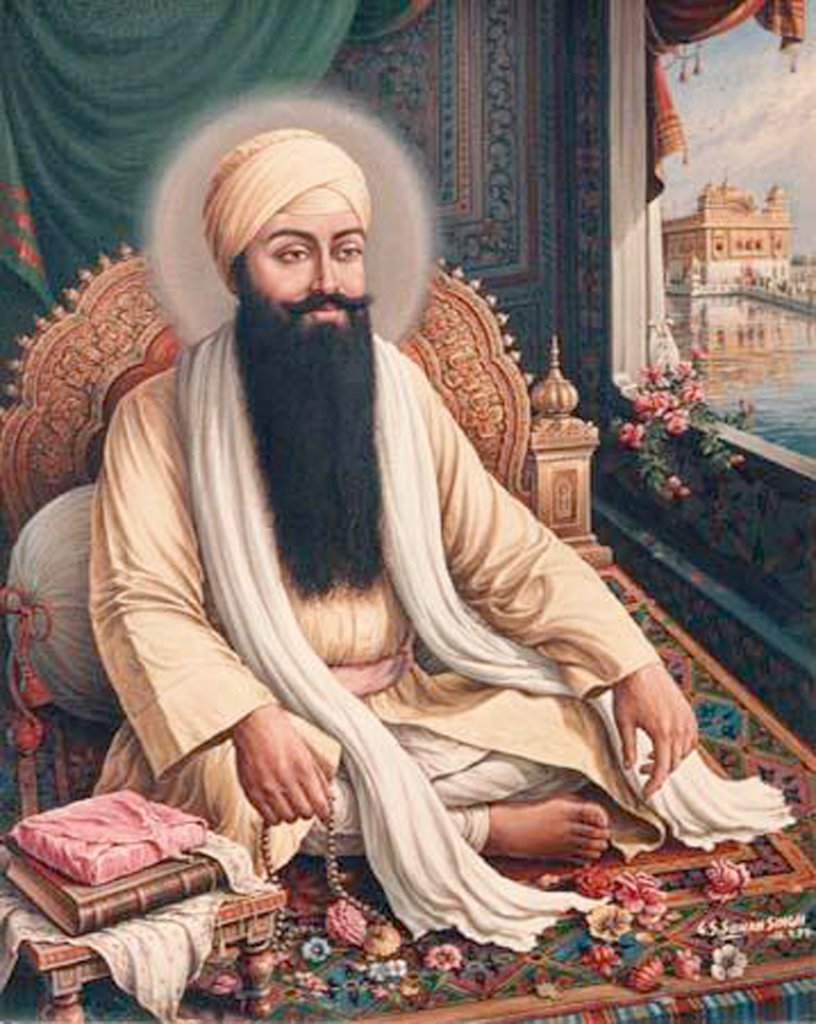 That manifestation of Guru Ram Das as a Raaj Yogi in personality, in practice, and in reality, in the very essence of his being, was sermonized in the Siri Guru Granth Sahib. There is an exact science, there is an exact technology, there is an exact knowledge in which an individual finite little man who is nothing–he doesn’t even know whether or not he’ll get up in the morning or whether the praanaas of life will come to him–that individual can manifest Almighty God in the essence he wants, or in the essence she wants. This is the great knowledge which is in existence.

But who exactly is Guru Ram Das?

Guru Nanak gave the Guruship of the Sikhs to Guru Angad, who, in his time, gave the Guruship to on older man named Guru Amar Das. Guru Amar Das created a center in Goindwal. There, trade, education, and spirituality flourished among people of all castes and creeds. A young orphan boy named Jetha came to live in Goindwal during Guru Amar Das’s time. Though he had very little, he dedicated himself to serving others. He would sell wheat-berries in the street to earn his livelihood, then go serve in the Guru’s community kitchen, or work on many of the construction projects in the village.

From a young orphan who made a humble living in the streets while serving others, Jetha became the son-in-law of Guru Amar Das. There are many beautiful stories about their time together as father-in-law and son-in law. In time, Guru Amar Das passed the Guruship to Jetha, who came to be known as Guru Ram Das.

Yogi Bhajan talks about Raaj Yog as a very particular state of consciousness. It is living as a yogi on the inside, and as a king on the outside. It is being able to see the unseen, known the unknown and hear the unheard. The throne of Raaj Yog was given to Guru Ram Das because he achieved this state of consciousness. Did he achieve it by leaving the world behind and doing severe yogic practices? No. He achieved it by meditation on the Shabad while living as a husband, father, and son-in-law, who earned his living and served his community. No one knows what personal yoga or meditations Guru Ram Das may have practiced. But the stories are clear that his devotion was unparalleled.

After he became the Guru, he had a particular habit. Travelers would arrive every day to meet with him. In the evening, Guru Ram Das would dress very humbly, and go to where the travelers were resting, to wash their feet. The next day, when the travelers had a chance to meet Guru Ram Das for the first time, they were surprised to find it was the foot-washer they had met the night before, now sitting upon the Guru’s throne.

Stories of Guru Ram Das’ humility and grace circulated far and wide. In time, those stories made it back to the Udhaasee community, the first sect established by Guru Nanak. In the almost four decades that had passed since Guru Nanak’s time, Baba Siri Chand had continued the work his father assigned him. All of the schools of yoga at that time recognized Baba Siri Chand as the greatest yogi. It is said that Baba Siri Chand did not need food, he lived purely on air; and that his skin had a slightly bluish color because he was nourished only by prana. Even though he was old according to time, he did not look any older than a teenage boy. All of the schools of yoga bowed to him.

When the two met, Baba Siri Chand saw his father’s likeness in Guru Ram Das. Yet, the yogi questioned Guru Ram Das about his beard. “Why do you have such a long beard?” he asked the Guru. Guru Ram Das knelt down on the ground before Baba Siri Chand. He took his beard in his hands, bent over and began to wipe the dust off of Baba Siri Chand’s feet. “This beard,” he said humbly, “is to clean the feet of great saints like you.”

In that moment, Baba Siri Chand realized why his father had not left him the Guruship. While Baba Siri Chand had tremendous knowledge, and amazing yogic powers, he did not have the sense of devotion and service needed to become Guru.

“The difference between a man and a yogi is that man can listen to the feeble sound of the soul. But a yogi only listens to that sound (of the soul.) It’s like an alarm, a fire brigade going. The guidance becomes absolutely intuitive. Every person has that capacity.

Nanak’s religion, or reality, is Raaj Yoga. In Raaj Yoga the individual is a union of the polarity. It’s not a duality. Kundalini Yoga was developed so that married people, family people, real people, can also experience God. Baba Siri Chand, the eldest son of Guru Nanak was given the Guruship of the Udhaasees, the detached sect. And Guru Angad was given the Guruship (of the Shabad). The grist ashram, this married life, is the greatest life. The angels and goddesses worship to be in it.”
– Yogi Bhajan, July 15, 1991

Guru Nanak’s life seeded two different traditions. One was the yogic tradition, headed by his eldest son, Baba Siri Chand. Its purpose was to preserve the truth of the yogic teachings while confronting the culture of the yogis who had become socially destructive. The other tradition was founded on the Shabad, on devotion, service and living a householder’s life. It was a tradition that opened the door to liberation for the average person. This had never been done in India before. These two traditions began with one enlightened man. They developed on their own for decades after Guru Nanak’s passing. But when Baba Siri Chand bowed to the feet of Guru Ram Das and accepted his father’s will, those two paths met again.