Home › Experiences › Our Stories › He Fell in Love with Fate 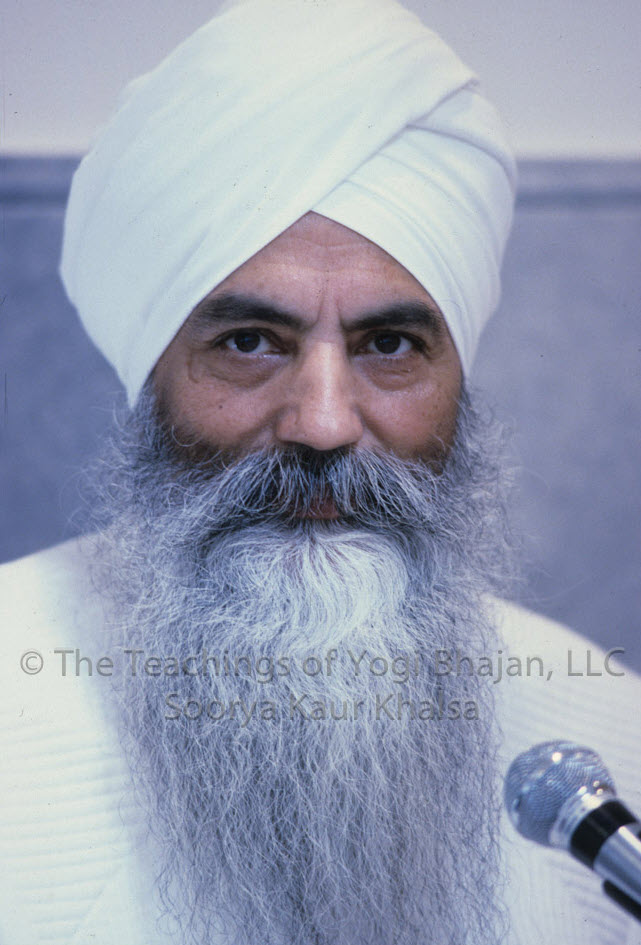 One of our dear readers has requested that I write about the following Yogi Bhajan quote. I usually write stories about my life with the Siri Singh Sahib, Yogi Bhajan. But, this is such a wonderful teaching, I can’t resist thinking about it in depth and sharing it with all who wish to read further.

“Destiny is granted to you by God, and fate is also given to you by God, to test you.
As we were speaking, Fate said a wonderful thing to me. She said, ‘Yogi, count the basic steps to God.’
I said, ‘Saram pad, karam pad, shakti pad, sahej pad, sat pad.’
She said, ‘I am the master of the shakti pad. That realm belongs to me, so don’t challenge me.’
Since then, I have been trying to learn and become a student again, to tolerate Fate, that score time of sitting and going through the papers and answering all that you have read in life. And I have actually fallen in love with Fate. It brings you to a confrontation with all your karma in the shortest time.”
~the Siri Singh Sahib, Yogi Bhajan, June 28, 1987

The reason we listen to the Siri Singh Sahib is because he speaks from an elevated experience. His students have the Siri Guru Granth Sahib and his example to back up his experience. So, when he speaks, we listen. In the statement above, it’s necessary to understand the five stages of spirituality in order to understand what he means. Let me go through them briefly.

Saram Pad is the stage of awareness and enthusiasm that life has a purpose and life will get better and better. There is a system and lifestyle one can follow to fulfill life’s purpose.

Karam Pad is the work that this process requires. It may or may not seem endless as it is a test.

Shakti Pad is when the aspirant believes that they are the power, the creator, the God. They have lost the gift of surrender.

Sahej Pad is when the aspirant travels into the subtle realm of divine existence. Life just flows as God is the Doer of your life and you know it. There is no more worry. It’s like a dream come true. Liberation is assured so long as you Keep Up.

Sat Pad is when the aspirant and God become One. There is no ego. Samadhi is bestowed. The merger is complete.

Some spiritual aspirants never make it out of phase two, the Karam Pad phase, or, for that matter, into it. Karam Pad is the work level were service is tested until serving becomes a habit.

As we can see, Shakti Pad is the killer of dreams. Many make it to the Shakti Pad level only to succumb to its challenges, usually without even realizing that it’s just another test. Even if a Teacher tells them, many can’t or won’t hear. They believe that they can control their life. Well, the secret here is to remember that you can’t take care of yourself; you need to surrender to a higher self. A self without ego is the goal.

The Siri Singh Sahib says in his statement that it’s at Shakti Pad that we lose our destiny and revert to our fate. Very few break through this level. In the statement above, fate said that “she is the master of Shakti Pad, don’t challenge her.” Well, the Master accepted this challenge. He was one of the few blessed ones who defeated this master of Shakti Pad called fate. In this statement, he tells us how he did it. He became a student again. He learned through his study and intuition that the way to defeat the challenge was by not challenging fate. Rather avoid fate; bypass fate; never touch fate. Tolerance was the answer to not challenging fate; tolerance not only to others, but tolerance to himself. He was aware of his thoughts and tolerant to those thoughts which challenged his destiny. Tolerance means neutrality, so he didn’t have to act on his thoughts. As a result, he elevated beyond Shakti Pad by not challenging fate, but bypassing her. He’s a real smart guy. He just kept going. He didn’t look back. He didn’t judge; he didn’t acknowledge; he didn’t react to his needs; he just kept going in serving his Guru.

He fell in love with fate because he’s overcome it. He had no fear in facing fate because there’s elevation in having fate remind him to just serve his Guru. Fate brought him in confrontation with his karma. He was forced to face that which he didn’t know existed. He was confident and grateful for the challenge. But fate is a good opponent. She has a secret weapon. It’s human nature to avoid unpleasant issues. Fate has a warehouse full of pleasantries for the aspirant. She offers many alternatives to the challenges. Most of these alternatives dupe the aspirant too take the easy road. He didn’t succumb, he just kept going and serving.

The Master loved fate because it eliminated his karma when he did his duty and didn’t succumb to it by taking the easy road. He took the road less traveled. This is the way to liberation. He loved fate because he learned, as a good student, that by just serving Guru Ram Das, and really enjoying the process, the challenges that fate presented could not only be overcome but could be elevating as well. By this process the Master was able to move into Sahej Pad. The transition from Sahej Pad to Sat Pad is a whole other story for another time. Thank God we’ve been blessed to have a Teacher who lives in God’s Will, a Teacher who, as in the statement above, teaches us, his students, how to love Shakti Pad.

Some schools of yoga teach that Shakti Pad is a good thing. And, of course, they’re right. As we’ve seen above, Shakti Pad should be a gateway to more and more blessings. Our Teacher gives his students a heads up, a warning that all isn’t beautiful until you begin to overcome your karma. Everything isn’t roses, lollipops, and roses right away. Our Master teaches us what to look out for first. For me, and I know for many others, this awareness has been invaluable in spiritual growth. This is what a Saturn Teacher does. Stay tuned,

Home › Experiences › Our Stories › He Fell in Love with Fate