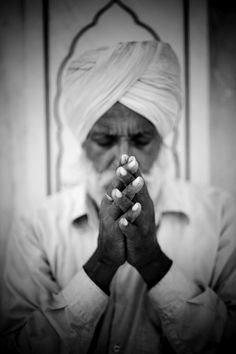 The Siri Singh Sahib was a living example of his own formula: Obey, Serve, Love, Excel. As a world-renowned teacher, business leader, advisor to world leaders, and family man, he remained faithful to his own commitments and faithful to his word. In every arena of his life, he offered love, excellence and personal service. He was a sage born of a meditative mind and unlimited vision.

He traveled the world many times over, serving and elevating tens of thousands of people. He tolerated physical pain, neurotic abuses and lame excuses, never giving up on us. There were students who wanted to give up on themselves, but the Siri Singh Sahib was always ready to point out that the first step back onto the path to happiness is commitment – commitment to a meditation, a diet, a walk, a relationship, sadhana, a yogic lifestyle, the Guru.

Meanwhile, his own commitment appeared to be infinite. He said he would be able to help us even more once he was no longer a “prisoner of the rib cage.” We are still experiencing the truth of that pledge as his lectures continue to attract and guide students. His subtle body still cleanses us during White Tantric Yoga, and new students continue to come to yoga classes or White Tantric Yoga claiming Yogi Bhajan personally guided them to do so.

The Siri Singh Sahib spoke as an authority when he said, “If your presence doesn’t work, nothing will.” His presence was literally magnetic, radiating with meditative caliber and kindness. To use words from his own poetry, his energy was like “the steady, shining sun.” As master of his own mind, he was not subject to moodiness. His capacity to keep his third eye (ajuna chakra) awakened gave him the vision and gaze of the mystic who perpetually sees the One in all. He was committed to serving that One in every word and action. He even signed his letters, “In God I dwell.”

The Siri Singh Sahib’s grandfather helped shape his consciousness by always greeting him reverently with folded hands. As our spiritual teacher, the Siri Singh Sahib Yogi Bhajan aimed to cultivate the same divine Self-awareness in each of us. He did not cater to the personality, but spoke directly to the soul in each person. He could see our auras and our destinies. To those of us who wanted a constant reminder of our spiritual identity, he gave spiritual names. He directed us toward Universal Truth rather than to himself as a personality. He said many times, “Don’t love me. Love my teachings.”

How can we honor such a one?

We honor the Siri Singh Sahib by living and sharing his teachings. He directed us to drop our problems to serve and elevate others, and he gave us tools, institutions, and each other to assist us in that aim.

The Siri Singh Sahib sometimes spoke of his own relationship with his “Saturn teacher.” When he was still a teenager, Harbhajan Singh was told by his teacher that he had mastered everything he had to teach. His teacher “certified” him with the words, “I am no longer your teacher.” To which Harbhajan Singh responded, “You will always be my teacher.”   In that one profound and humble response, we learn that there can be no ego in achievement and that every grace deserves gratitude. We owe the Siri Singh Sahib our utmost reverence and gratitude as the one who delivered us to this same Self-understanding.