How I Became a Sikh

I guess you could “classify me” as an “old timer” in 3HO. I first began to discover who I really was in the 1960’s. Like most of my generation in the West, I grew up singing the anthems of our time; the anthems of a new awaking consciousness.  We were “Uncle John’s Band” (to reference the old Grateful Dead song on “American Beauty.”)  Everyone knew the words and everyone knew the tune. We all joined the dance together. We lived each day in ecstasy, love, and fearlessness. We lived each day in song and dance, sharing our new discoveries and serving each other in simple ways.

Some of us felt a calling. It began quietly amidst the Dionysian tumult of the sixties.  We felt a strong desire to meditate and go deep within; to fly as high as humanly possible. But we didn’t know how to meditate.  I remember simply sitting up straight, choosing my music carefully and closing my eyes. I would let the music take me on a journey. I think, perhaps many of us began to meditate in this way.

I was living in a house on Oregon Street just off Shattuck Avenue in Berkeley, California.  We called it “Berserk-ly” at the time. We were a raggle-taggle bunch of gypsies who shared whatever we had and put whatever we didn’t need into the Free Box down on the corner behind our local natural foods store, Wholey Foods. If there was something we needed, a pair of shoes or a jacket, or even if we were just looking for something new and cool, we’d usually find it in the Free Box.

One day a young man moved into our house and I noticed that he would do something unusual when he woke up in the morning. He would sit down and begin breathing loudly and rhythmically while stretching his body into strange and beautiful positions. One day he noticed me watching him and asked me if I’d like to learn Kundalini Yoga.  “Sure!” was my immediate reply. I had found myself fascinated with his ability to concentrate and direct his attention inward. I started getting up every morning and practicing what I was learning. 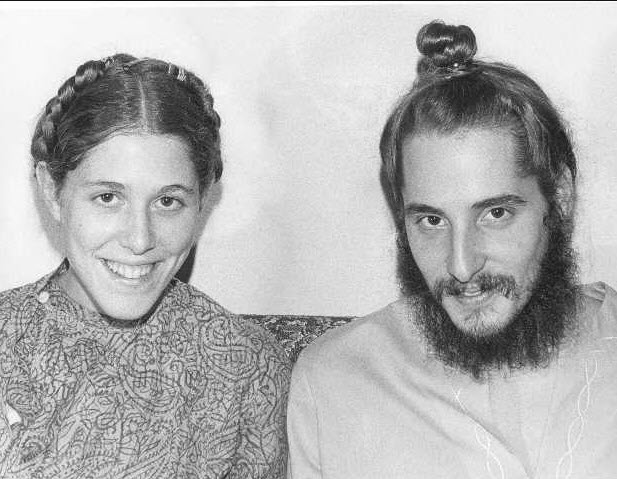 It was the Spring of 1971 when I first met Yogi Bhajan at the Earth Rebirth Festival on Earth Day at UC Davis in Davis California. What I remember from that day was the sunrise snake dance led by Yogi Bhajan and Chief White Eagle, and the class that Yogi Ji held later on that day. I remember he didn’t talk much.  And he didn’t talk about himself at all.  He had us all closing our eyes, inhaling deep and chanting “Saaaaaaaaaaat Naaaaaaaaaaaam” over and over for 31 minutes until we all dissolved into a sea of bliss, riding the sound current out of our physical bodies until we all came to our senses.

Later that summer, my wife-to-be and I traveled from Berserk-ly to New Mexico in our step van, which we had outfitted as a camper. I went to my first Kundalini Yoga class in a grassy park in May 1971 in Santa Fe, New Mexico. At the end of the class, the teacher guided us in a meditation with eyes closed.  In my meditation I saw two big golden doors opening.  I walked through them into a golden space filled with light, music, and deep love. A beautiful man with a long beard was sitting on a golden chair.  He smiled and motioned me to come forwards. He put his arms around me and I sat in his lap.  No words were spoken.  The only sound was this incredible celestial music. I felt the deep love, wisdom and complete acceptance of this soul who held me in his arms.  After the class was over, I went up to the teacher and I described exactly what I had seen in my meditation and asked him who this man in my meditation could be. He told me that I was describing Guru Ram Das, the 4th Guru of the Sikhs.  I had no idea who that was, or anything about Sikhi or Sikh history.  I didn’t even know what a Sikh was! All I knew was that I had met an incredible and deeply wise soul who loved me and was guiding me.

It was at Summer Solstice 1971, at the high mountain farm of Mike and Minka Cummings in Paonia, Colorado, that Guru Ram Das drew me closer to his bosom through the power of mantra.  We stood in line and chanted “Guru Guru Wahe Guru, Guru Ram Das Guru” till all sense of time dissolved. All I wanted to do was keep on chanting forever, merged completely in the ebb and fall of the plaintive melody that resounded in our bodies and filled our hearts and minds with devotion to the Guru.

It was at that Summer Solstice gathering that I was married. Yogi Bhajan married 23 couples on the beautiful morning of Summer Solstice Day. We did not yet understand the Siri Guru Granth Sahib. There were no four rounds of the Lavan.  We sat in meditation and Yogi Ji gave us our vows in the summer morning sunlight and we bowed to the Mother Earth to acknowledge our acceptance of those vows.

Early that morning, before the marriage ceremony began, a young yogi came up to me and suggested that I tie a turban for the wedding ceremony. “But I don’t know how” was my response.  “Oh, I’ll help you” he said.  And so it was that I tied my first turban.

The wedding ceremony went on for about three hours.  We chanted, sang and danced, and we partook of a beautiful cake that someone had made decorated with daisies, raisins and nuts. 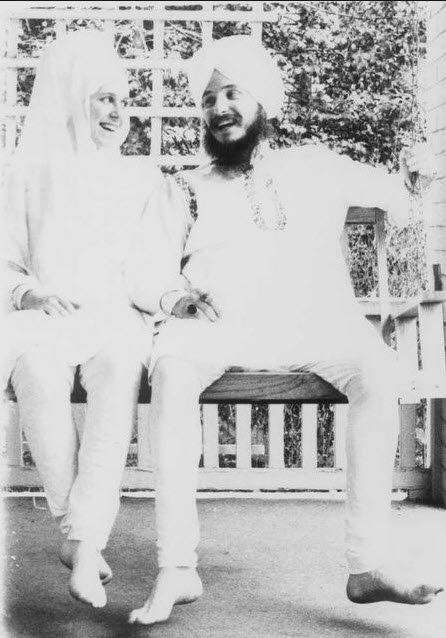 At this point we simply wanted to be together.  We wanted to be with others who understood and experienced the joy of chanting the Naam. We wanted to live so that we could up-level each other in the midst of the turmoil of American society in the 70’s. We formed ashrams in many cities, we taught others how to calm, strengthen and awaken their bodies and meditate on Naam. Sangats  began to grow organically from the seeds of Naam that had been scattered far and wide in the fertile soil of the consciousness of the times.

Slowly, our own bards began to emerge and the sound of voices, guitars, flutes and drums created a new sound current filled with love for each other and for our Guru. We began to weave our own new anthems, and the chords that resonated within in us reached back through the coils of our genetic memory and awaked our souls to remember our former lives in the Guru’s Court.

Nukes were a constant presence in our consciousness in the 50’s, the 60’s and the 70’s, and all the tribes who were rediscovering their roots during that catalytic time devoted much of their energy to helping the world release its fear and reawaken its spirit. It was at the next Summer Solstice in 1972 in Mendocino, California, that Yogi Ji told us of a 72 hour meditation that the Tibetan monks, together with saints and sages all around the world were doing.  He asked us all to participate.  This was a worldwide meditation designed to help the earth pass through a critical transition period out of the consciousness of fear and paranoia into a New Age of fearlessness and the direct experience of the Truth within each one of us. We built a huge bonfire in the middle of an open field and began to sing.  Musicians joined in and we sang.  We sang continuously for 72 hours without a single break.  We sang the songs and mantras we knew and we invented new ones on the spot.  We played drums and guitars and clapped our hands together. Some folks napped for a while in the blissful sound current and then reawaked to begin singing again. Musicians came and went in shifts organically through the night and the sound current was unbroken. It was our first Ransabhi kirtan.

I first heard the Ardas  at that same 1972 Solstice celebration. We would sit in langar  lines in an open field and we would serve the meal. Tasty kitcheree – mung beans and rice cooked with onions, ginger and garlic masala , freshly cooked beets swimming in their bright red juices and a quarter of a head of iceberg lettuce.  One day, right before we began to eat, a young Sikh took the microphone and recited Ardas.  Waiting to eat after a long day of White Tantric yoga, I gazed hungrily into my red beet juice as he recited the deaths of the great martyrs in graphic detail, bodies sawed in half, blood pouring out on the ground.  It was quite an experience and I didn’t understand it at all. But the images lingered in my mind long after the meal was over.

It was in that Mendocino mountain field in 1972 that the flag of the Sikh Dharma in the West was raised for the first time. Many turned their backs and left, not wanting to be part of any “organized religion.” But the rest of us felt a resonance within our hearts and we knew that this was to be our path and our mission in this lifetime.