Home › Experiences › Our Stories › In Gratitude for Siri Ved Singh 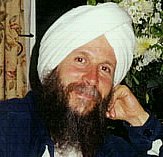 We received the news today that Siri Ved Singh passed away.  For many years, Siri Ved Singh suffered from Parkinson’s Disease.  Even though we will miss him, we are so happy for him to be free of the difficulties of his physical body.  Akaal!  Akaal! Akaal! We send love and blessings to you as you merge with the Creator beyond this physical, earthly realm. Wahe Guru!

On behalf of the hundreds of thousands of people who have been uplifted, and whose lives have been changed for the better, by the teachings of Yogi Bhajan, the Students of Yogi Bhajan would like to express our extreme gratitude for the decades of commitment, dedication and Keep Up, which Siri Ved Singh put into preserving the teachings of Siri Singh Sahib, Yogi Bhajan.  Siri Ved Singh’s work of tirelessly initially audio taping and then later video taping the live classes of Siri Singh Sahib, Yogi Bhajan, is the reason that we have the Library of Teachings today.

Before there was an internet, the only way for people who did not attend the Siri Singh Sahib, Yogi Bhajan’s classes in person to hear these teachings for themselves, was to purchase cassette tapes or VHS videos from Golden Temple Recordings. Even after the internet took shape, it still took years for people to transcribe these lectures and create the Library of Teachings site to house these beloved lectures.

The Library of Teachings is now home to thousands of video, audio and transcribed lectures that comprise the life long teachings of Yogi Bhajan. We are eternally grateful for Siri Ved’s years of service, travelling and attending most of the Siri Singh Sahib’s lectures, so that the gift of these teachings can now be available for all generations to come.

In addition to capturing the teachings of Yogi Bhajan, back in the day, before being able to get music online through Spotify, Apple Music and sites like Spirit Voyage, Siri Ved Singh and Golden Temple Recordings was the go-to place to get inspirational music from early 3HO artists like Singh Kaur, Gurudass Singh, Livtar Singh, Guru Singh, Krishna Kaur and many more. Golden Temple Recordings closed years ago, but those of us who relied on them for having access to our wonderful Dharmic music, are eternally grateful to them for being there for our 3HO community for so many years.

On August 23rd, 2008 Siri Ved Singh Khalsa was awarded the lifetime achievement award for his service for over 40+ years.  Here is a video of that event.

Home › Experiences › Our Stories › In Gratitude for Siri Ved Singh