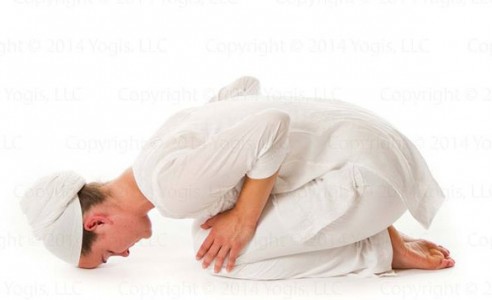 POSTURE: Sit on the heels in Rock Pose, with hands on thighs.
MANTRA: Recitation of Guru Gobind Singh’s Jaap Sahib.
MOVEMENT: Begin bowing the forehead to the floor to the Namastang rhythm:

With the recitation:
Bowing 4 counts, resting 1 with the music. (Consider one cycle of touching the forehead to the floor and rising as 1 count.)

This can also be done with the arms and hands in Yoga Mudra: hands interlaced at the base of the spine, palms facing up. Arms would stretch up as high as possible when the forehead touches the ground.

TIME: Continue for the entire recitation of the Jaap Sahib.

Option 2:  Musical version by Guru Shabad Singh and Hargobind Hari Singh.  This musical version was completed in 2020, per the instructions of Siri Singh Sahib Ji in 2002 for Jaap Sahib in the Aquarian Age.  Listen to this version here.  Read about how this music came to be here.

Excerpt From:  “I Am a Woman: Creative, Sacred & Invincible.” Kundalini Research Institute