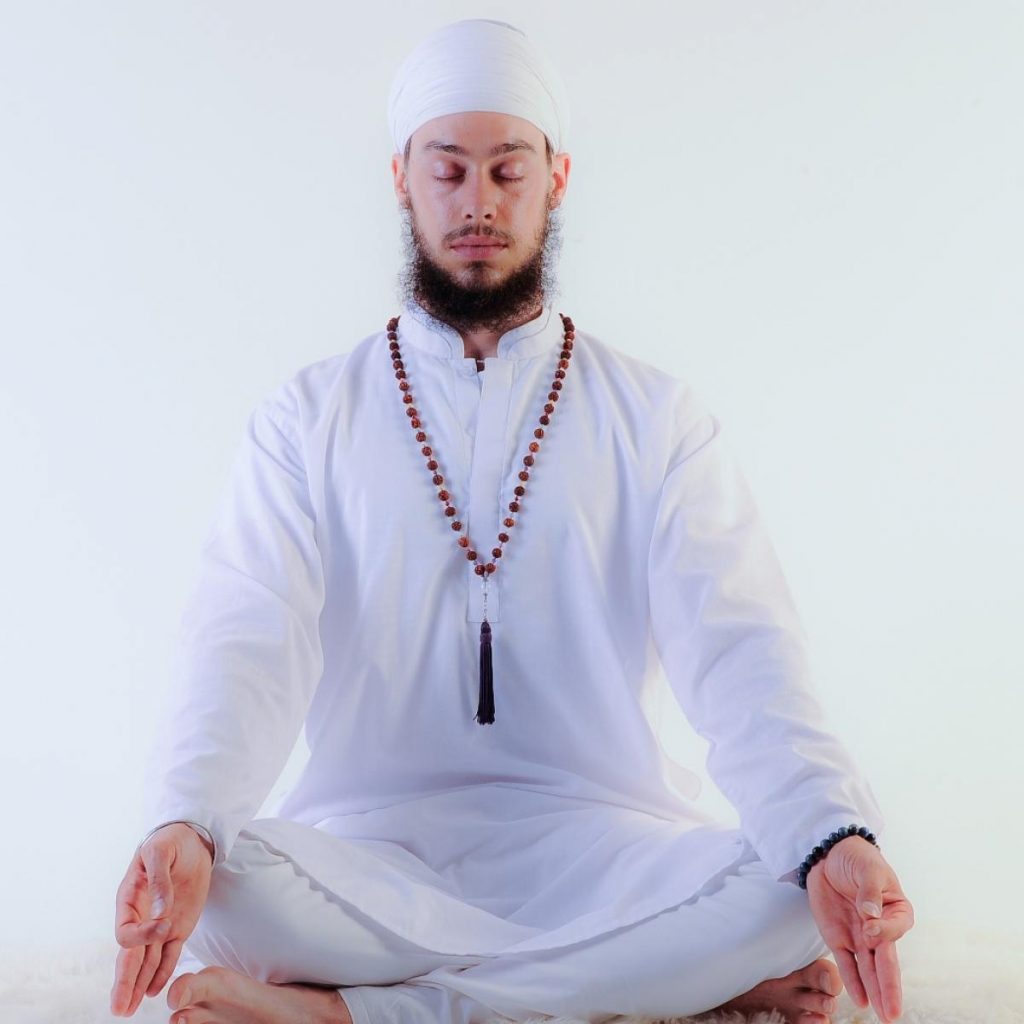 (Sung by musicians at the time of Guru Arjan)

“Sit up straight, cross-legged. The hands are in Geeaan Mudra, with the palms facing up and the backs of hands resting on the knees, arms straight. The eyes are closed and focused at the third eye point. Inhale very deeply and then chant the mantra as you exhale very slowly. Inhale deeply and again chant on the exhale. Continue.

“The mantra is: Saa Re Gaa Maa Paa Dhaa Nee, Saa Taa Naa Maa Raa Maa Daa Saa, Saa Se So Hung. It is to be chanted at a normal major scale (Do Re Mee Faa …), beginning with the lowest pitch possible, so you can complete the twenty components of the mantra without deviating from the scale. The mantra should be chanted very powerfully throughout. One cycle up to So takes about fifteen seconds. The sound Hung is very forceful. Part of this force comes from puling in the navel point. The ng sound of Hung is made through the nose and is sustained until all the air is expelled.

“The points of mental focus are very specific. Divide the spine into eleven parts beginning with the triangle at the base of the spine for Saa and proceed up the spine in equal increments so that Nee is chanted at the neck. Saa is changed at the back of the head (the memory area which is damaged by drugs); Taa is at the solar center (from which can come a smell which attracts all humans); Naa is at the soft spot (the point of death from which the soul leaves the body); and Maa is at the edge of the forehead to the third eye point. (Maa represents creative destiny, and the forehead is the point of destiny.) The remaining sounds are beamed from the third eye point out to Infinity. This kriya may be practiced for any length of time, the longer the better.

“The word kauree means twenty and refers to the twenty sounds. The first seven sounds are called sargam. The next five sounds are the five elevating or musical sounds and are called the Panch Shabad. These twelve sounds together are known as Siri Sargam. The next four sounds are Raa, Maa, Daa, Saa, which mean respectfully sun, moon, earth, and Infinity. The final four sounds of Saa, Se, So, Hung, mean Infinity, Thou, I am, Thou. These last eight sounds are called Siri Gaitree Mantra. The total twenty sounds are Siri Mantra, Liv Sarang Mantra, and Geeann Mantra, as well as Kauree Kriya, Sankh Kriya and Surtee Kriya.

“Kauree Kriya is a good example of the combination of mantra, concentration, praanaayaam, rhythm, melody and all other aspects of Naad Yoga. Contained in this kriya are mantras of the earth and ether elements.

“This kriya will balance the earth and the ether components of your being. Kauree Kriya is of Saraswatee, who is the goddess of naad of the world. The master of naad is Akaal, the undying Being. This kriya is the first step towards raising your energy from the lower to the higher centers. It will take the apaanaa (eliminative energy) into the praanic (generative energy) region, balancing and properly channeling these energies. Eventually, praanaa and apaanaa will both end up in Saraswattee, the lotus of one-thousand petals, the solar center of highest consciousness. This will turn the chakra upside-down, so the nectar will run out of it: by virtue of the Nam, the nectar starts dripping in me. Through it you can attain a completely balanced consciousness that can achieve anything.

“Kauree Kriya will tune you into the Unknown. The first twelve sounds, Siri Sargam, are the end of everything. They will bring melody, verbalization and power. Whatever effect you want will happen on your word. On the physical level, this kriya will make the glandular system secrete in the same way that it does on the eleventh day of the new moon and will also aid in weight reduction.

“Listening to the sounds is an important aspect of this kriya. You can experience how vast you are both by listening to your own sounds or by placing your ear near the spine (middle-upper) of another person so you can hear sounds beyond the twelve sounds.

“In ancient times, this kriya was practiced by large groups sitting in concentric circles under a dome. A single person would sit in the center and lead the chanting.”

“God is vibration, which prevails through everyone, and His Holy Name holds the world.”

“One who vibrates the Holy Nam with each breath becomes a holy person and lives forever.”

“Why do we chant the Nam, the Holy Name? So that the finite may be purified by the energy of the Infinite.”