Krishna Kaur tells the story of the origin of the women’s turban in the early days of Sikh Dharma and 3H0 :
I first started wearing an African head wrap in 1965 or so. It was something I did on a whim. I was sewing my own clothes at that time and had extra fabric left over, wrapped it around my head and liked it. It felt good, better than I imagined it would. It felt right for some reason, so I kept wearing it. I wore the head wrap often, because it reminded me of my African roots which I had been wondering about. And I never stopped.

I got involved with 3H0 in 1970. At that time women were wearing their hair covered with rishi knot covers and draped with chunis over the top.

When we traveled to India, I was still wearing my African head wrap. Yogi Bhajan even gave me some of his old turbans to wear when I ran out of laundry. Everyone knew I had my own unique way of doing things. That was just me; that was just “Krishna.” I wore my African head wraps; the other women wore the rishi knots with chunis over them.

After a few years, we became aware that there was a group of Amritdhari Sikh women in India. They tied small black turbans that looked much like their well-groomed black hair just tied up, with a chuni over it. They were the only Indian women we saw who wore “turbans.” 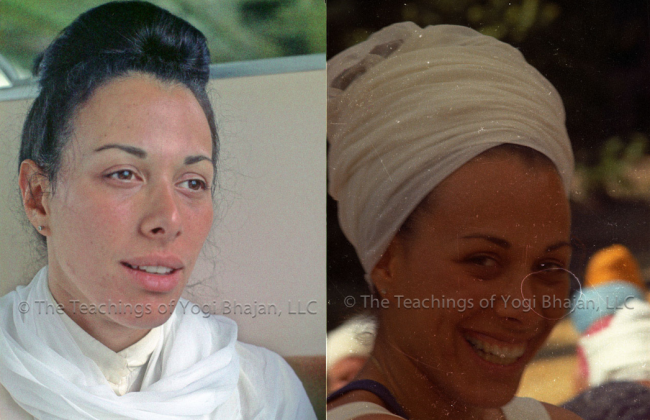 One day, Satsimran Kaur, a member of Yogi Bhajan’s staff, came to me and asked me to show her how to tie a turban like mine. I still wasn’t thinking of it as a turban at that time. I tried to show her and she tried it out for a few days, and that was that.

Then another female member of Yogi Bhajan’s staff asked me to show her how I tied it and I showed it to her. She showed it to the Siri Singh Sahib, and he said “Aah great! Now every woman should tie it like that!” And then everyone began copying my style or “turban,” and it took off from there. 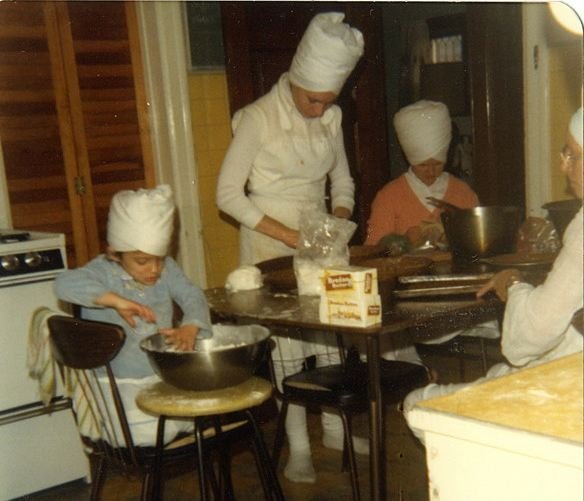 For a while there were some strange looking attempts. The ‘stove top’ style, tall and narrow, was one of them. The styles continued to vary and women began to explore ways that suited them best. Mine was always fairly large, still looking very African. Women found their own ways and styles of doing it, so it was complementary and graceful for them, and they put the chuni over it as it is often worn today. Different textures and types of cloth eventually came into play.

Yogi Bhajan never said anything to me about my turban, but I always felt comfortable wearing one. And, when he confirmed the style on one of his staff, I felt he had confirmed mine as well.

When I talk to people about wearing the turban, I talk about the scientific effects. Having tightness at the temples and covering the crown chakra was the main thing, and then building it up so it had a nice look to it. It was important to me that my temples felt that tightness. Whatever happened after was stylistic.

What’s fascinating to me is how Yogi Bhajan drew on things we did – he didn’t tell us women to tie turbans right off the bat. When he saw me and then realized that his staff was attracted to the style, he realized it was something that would work on everyone. He picked it up right away and moved forward with it, spreading the word that all women should follow suit.

There are so many examples of ways Yogi Bhajan showered the Guru’s teachings on us. Women tying turbans grew naturally from something organic, rather than him telling us we had to tie them right off the bat. It emerged from a natural and serendipitous place and then grew from there.

I’ve always worn a turban, and I like the fact that everyone else is wearing one now too. This style of women’s turban makes a big statement! There’s no apology in it.

The turban has a lot of science behind it. In our culture today, it is very important to have our Crown Chakra in alignment. When we become upset or freak out, we don’t’ realize how it affects the nervous system, the brain and the bones in the skull. The turban is ‘what keeps your head together.’ It also gives us protection – knowing how powerful the arc line is. Our feelings, beliefs, attitudes and emotions can be affected by the turbulence of the times. Being able to crown yourself is protective. Covering our head is about holding a certain energy and maintaining grace.

If you haven’t tied the turban before, or have tied it from time to time and are considering making it a regular practice, have the courage to see how it feels!

People often avoid doing things because they are concerned about what other people will think. But the turban is not just for show, or identifying yourself as part of a community.  There is a technology behind it that can serve you.

Deep questions like “What do I want in my life?” and “What am I trying to achieve?” are probably more valuable than ones like “What will other people think of this decision?” 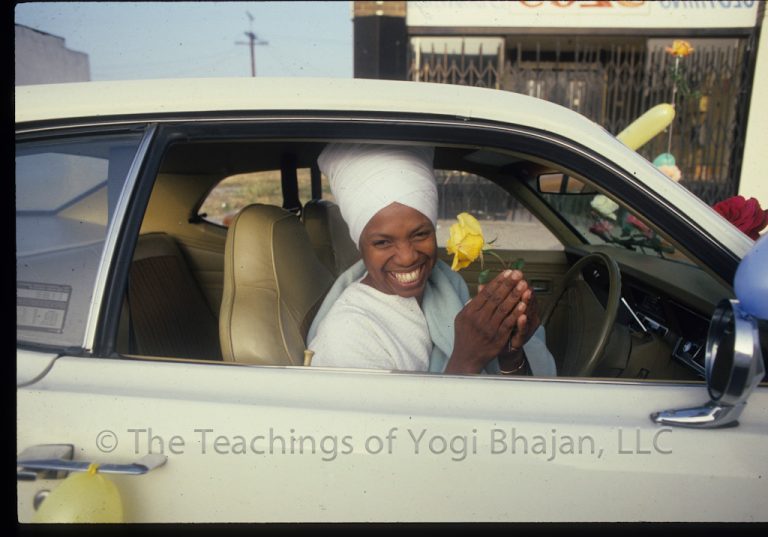 During a question and answer session in one of my Y.O.G.A. for Youth testing sessions, someone asked, “Why do you wear that thing on your head?” And one of my students responded “Because that way wherever I go, people will see it and know that they can come to me for help.” That was inspiring.

Krishna Kaur Khalsa is a dynamic, heart centered Yoga teacher who began studying with Yogi Bhajan in 1970 and has passionately taught the art and science of Kundalini Yoga and self awareness for over 40 years. She brings a wealth of knowledge and experience from her teaching in Africa, Mexico, and inner cities throughout the United States. A master teacher trainer of Kundalini Yoga as taught by Yogi Bhajan, she conducts workshops in Canada, Europe, Asia and Latin America.