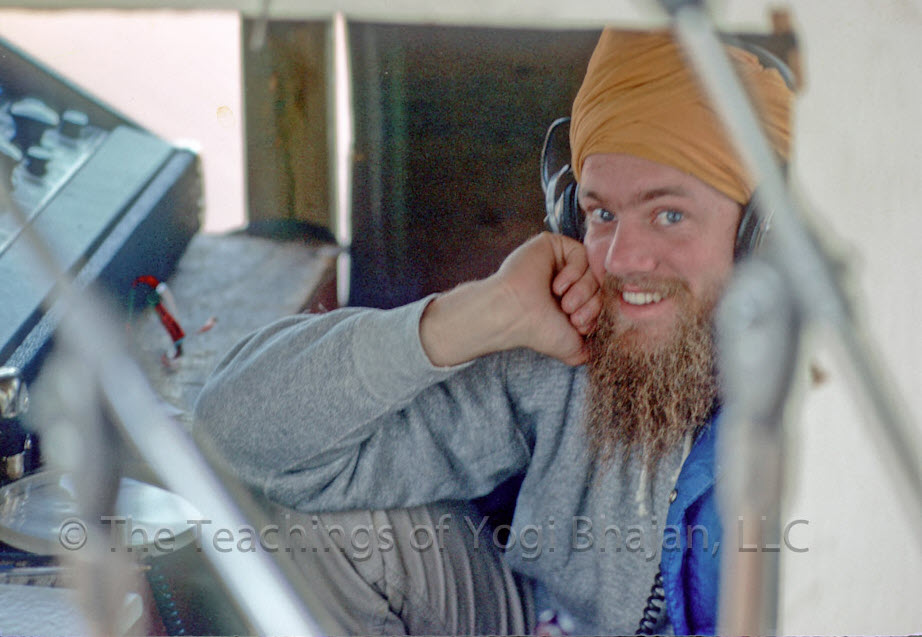 Livtar Singh in the sound booth at Winter Solstice, 1973

Livtar Singh Khalsa recounts his experience as one of the two first students of Yogi Bhajan in the West to take Sikh vows:

On Sunday morning of the Baisakhi day Gurdwara in 1970, I met up with Baba Singh on the street in Los Angeles. He was wearing a turban, which at the time was not the standard attire.

This was when we were “just” yoga students, and Yogi Ji had not formally introduced us to Sikhism. Guru Singh had started wearing a turban early on, but it hadn’t caught on much.

I was 18. I had been living in LA and studying with Yogi ji since early January.

So I asked Baba Singh, “Why are you wearing a turban today?”.

He replied, “Because I’m going to take Sikh Vows and become a Sikh!”

He said “Because my teacher is a Sikh.”

I thought about it for about 3 seconds, decided his reasoning was sound, and proclaimed, “OK, then I will too!”

If you would have asked us official questions about Sikhi, neither would have known a whole lot about it. But it turns out we knew more than we could have expressed.

He just told the stories in a matter of fact way…the same way you might tell someone about a story you heard in the news.  He would say something like “Guru Nanak was walking one day and did so and so. Then this happened, then that happened.”  He didn’t spend 10 minutes telling us who Guru Nanak was before telling the story. He would just tell the stories. We would think “Oh, some great holy man he is talking about.”, not really getting who they were.

This was very necessary for that time period. Virtually all the students were in some type of rebellious mental state. We had all just come to him after being raised in our various different religions and many would have outright rebelled at any whiff of that. So he went there without going there. He barely or rarely mentioned Sikhism, and definitely never tried to get anyone to officially adopt it. His mission at the time was to bring Kundalini Yoga to the west.

So when Baba Singh said that he was going to take Sikh vows, I didn’t know or care much about the details. If I could be more like my teacher by doing it, then I was all in.  It was an intuitive leap, which might be called a leap of faith if you were looking in from the outside.

Before the Anand Sahib we were brought up to sit near the Guru in front of everyone.  The man speaking announced that there were two young men who were going to be adopting Sikhism.

We didn’t know it at the time, but there was actually no such thing as “Sikh Vows”. There was the Amrit ceremony.  People who weren’t born Sikh, but wanted to practice it, would just start adopting various parts or all of it. Then when they were ready, they would take Amrit and become Khalsa.  Because of this, the people running the Gurdwara weren’t really sure what to do.  Official Sikh Vows were something we developed later as we grew.

So the entire ceremony went like this: A man came in front of us, had us hold up our right arms, and put karas on our wrists. Then he said “You know what to do.”  And that was that.

Well that seemed a little short and lacking somehow for such a solemn and majestic occasion. No instruction, no guidance, no do’s or don’ts.

In fact for years after I would tell the story and mention how the Sikhs didn’t even know enough to tell us what it meant or what to do.

Until many years later. Until the day that Siri Singh Sahib ji was teaching at Winter Solstice. He started telling the story of that day.

When I heard Yogi ji say this I laughed. I laughed at myself, at what a foolish thing I had been all those years, talking in such a condescending way about those Sikhs.  Indirectly slandering my own teacher. I enjoy a good laugh at my own idiocy. It’s much more polite than laughing at someone else’s.

But then Yogi Ji added “The man gave Livtar his own Kara off his own wrist”.

It was something I had never known until that moment. It is the Kara I still wear to this day. It reminds me to be humble.

Slander has a big role in the teachings of the Gurus. It’s because there is only ONE. There is no one else to slander. You can only slander yourself. You can only hurt yourself.

And thus the learning began on the very first day of my life as a Sikh. And continues forever and aye.

Read the article from the book, The History of Sikh Dharma of the Western Hemisphere –  “Two Students of Yogi Bhajan Take Sikh Vows in 1970”.