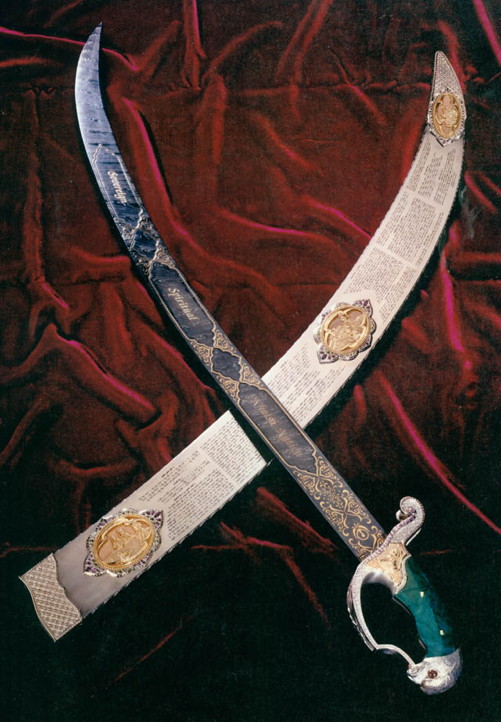 Sat Nam. It was in December of 1997, at our Winter Solstice Sadhana celebration in Florida, USA, that the Siri Singh Sahib, Yogi Bhajan, first indicated to me that he wanted me to create a very special sword.

Within a few months of that conversation, in March 1998, the Siri Singh Sahib came to teach and visit our ashram community in Millis, Massachusetts, USA. During his stay, the details of the sword he was requesting to be made began to emerge. He explained that this must be a very royal sword to honor the Tenth Master, Guru Gobind Singh, and the 300th Anniversary of the Birth of the Khalsa. We established at that time that the entire Jaap Sahib (a rather long hymn written by the Tenth Master, Guru Gobind Singh himself) would be laser engraved on the sword’s scabbard.

I invited several Master artisan/sculptor/engraver colleagues to work closely with me on this project. To help pay these artisans and cover some of my expenses, we created a full-color flyer to publicize and raise money for the project. Many colleagues and students of the Siri Singh Sahib contributed time and money, and several contributed materials that were used in the sword.

Over the next six months, I forged the pattern-welded nickel Damascus steel blade for the sword – the largest blade I’d forged, at 36” (91cm) long. During the process of forging and shaping this blade, I did my best to remain mindful of the privilege and blessing being afforded me in creating this commemorative sword, and I was grateful when it came out well.

A blade-smith colleague chiseled stylized panels into the blade to lend a three-dimensional quality, and 24K gold design work was inlaid around these panels and from the panels up to the handle by one of the Master engravers. The Siri Singh Sahib Ji indicated that certain English words/phrases should appear on the six blade panels (three on each side). ‘Sovereign, Spiritual, Khalsa Nation’ is on one side in large lettering.

I did some sketching, arrived at a handle design, and carved a wax model.  (In the process of lost wax casting, one carves a wax model which is then placed inside a plaster-like material. The wax is then melted out of the plaster cavity and the metal of choice is cast under vacuum pressure, in this case, white gold.) A carved falcon’s head, with large rhodolite garnet eyes, was skillfully carved by another of my Master artisan colleagues, which graced the back end of the handle. Slabs of Alaskan jade were inset into the handle forward of the falcon. Two engraved portraits of Guru Gobind Singh Ji are inlaid into the handle forward of the jade, on horseback on one side, and a frontal portrait on the other side. These portraits are cast in yellow gold, then hand engraved and inlaid into the white gold handle, which is studded with semi-precious gems and diamonds.

When the Siri Singh Sahib visited the Millis ashram community again in October of 1998, I showed him a selection of slides depicting scenes from the life of Guru Gobind Singh. He chose six scenes that would be pictured on the scabbard that sheaths the sword. These scenes are depicted in detailed, sculpted and hand-engraved oval panels cast in yellow gold that contrast with white gold frames in which they are set. Over 1000 diamonds are set into the jade inlaid sculpted handle and scabbard fittings. 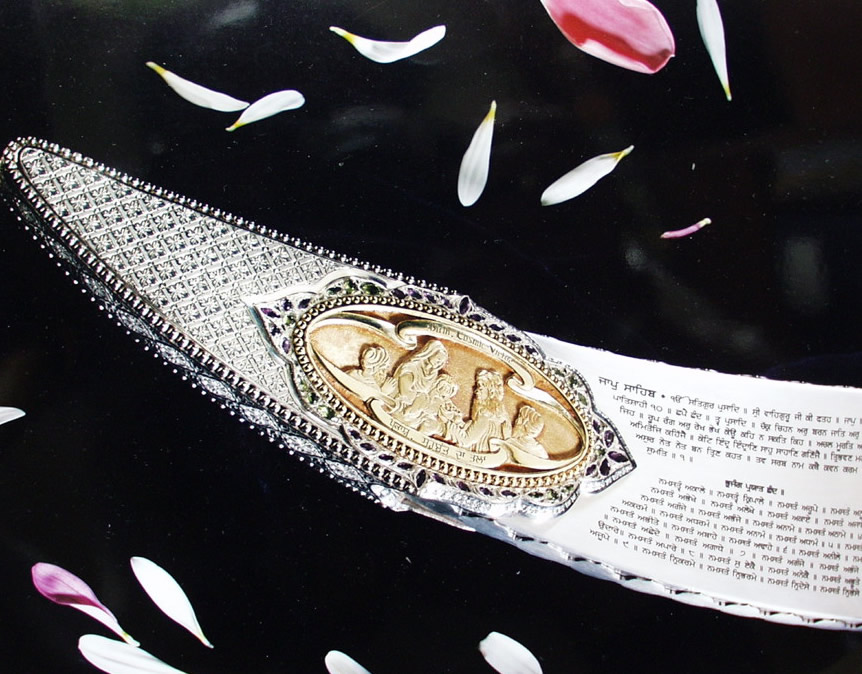 The completed sword is couched in a Flame Birch box, created from a hardwood tree that was growing in 1699. Submerged in Lake Superior for over 150 years, this wood was preserved by the cold water of the Northern U.S. Great Lakes. The names of all those who contributed to the making of this sword are laser engraved on panels set inside the lid of this special box.

Another colleague contributed the Palkhi Sahib that was used to carry the sword. At the 1998 Summer Solstice Celebration in New Mexico, the Siri Singh Sahib indicated that major contributors towards the “Sword of the Khalsa” would carry it in a procession to its final home at Keshgar Sahib Gurdwara in Anandpur Sahib.

The following October he added, “Singh Sahib Jot Singh Khalsa is making a historical gem studded kirpan with full Jaap Sahib on it. We pray he succeeds. This kirpan shall be our identity leader, and we shall follow as Sangat, just as the universe follows Adi Shakti.” 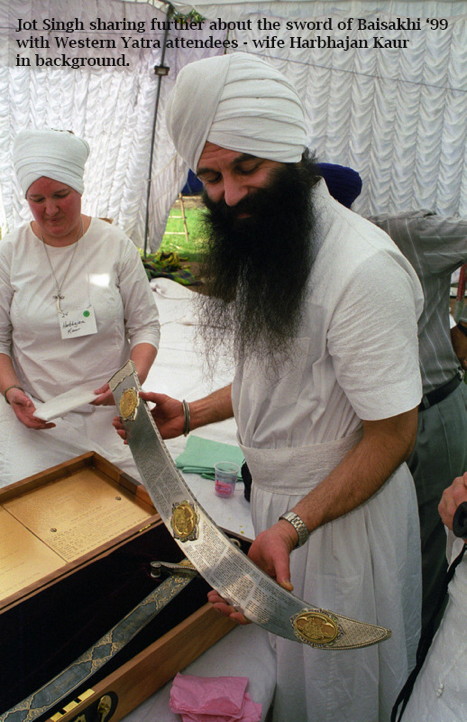 Making this sword was a personal meditation for me for a year and a half. Funding the sword was an international effort, predominantly by Sikhs of the Western Hemisphere, aware of the project. The ‘Khalsa’ has been Guru’s meditation for over 300 years, carried on a Palkhi of Courage, and Sacrifices, predominantly made by our Sikh Siblings born in the Eastern Hemisphere.

In gratitude for this heritage of grace, royalty, and sacrifice, and by Guru’s grace, it was our great honor to offer this “Sword of the Khalsa” to the home of Guru Gobind Singh in Anandpur Sahib. Sikhs of all nations come to answer the call of the “Master of the Unity,” we prayed together that Guru continues to bless the Panth Khalsa with grace and nobility.

In service, I remain,