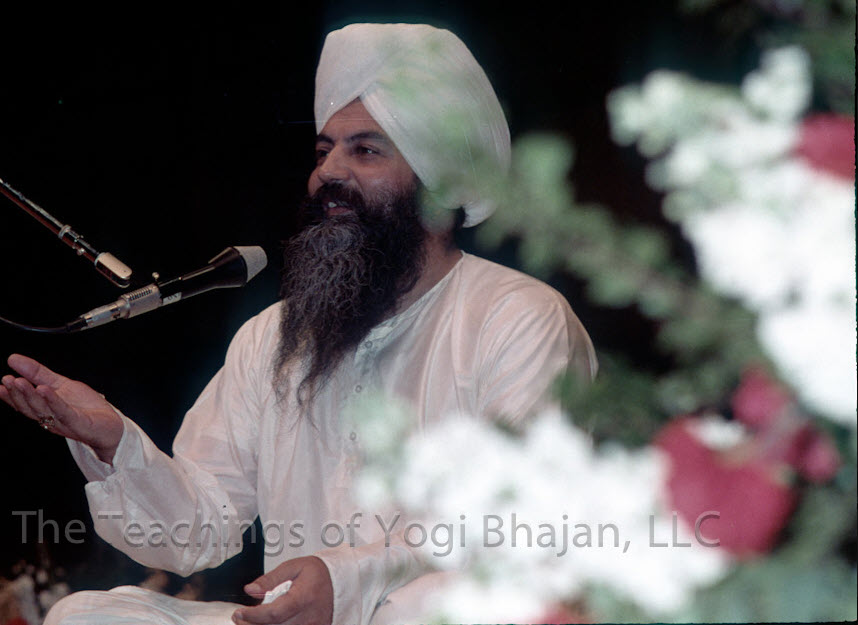 I first heard Yogi Bhajan at a lecture in Hartford, Connecticut in 1975.  At the time, I held a stressful research/teaching position at a University Medical School.  My deeply intellectual job had expanded my brain, but I disconnected my soul.  To manage the tension, I was practicing Hatha Yoga and Transcendental Meditation twice a day. But I also continued to smoke a pack of cigarettes a day, drank several cups of coffee daily,  and indulged in alcoholic drinks nearly every day.

I do not recall the specifics of Yogi Bhajan’s lecture, but it had an impact on me on a level I was not aware I had.  I knew without reservations that I had to make a change.  I left my job, family and friends and drove to Espanola.  When I arrived on Baisakhi weekend,  I first saw Yogi Bhajan as a regular person, hair down, in the kitchen teaching someone to cook. So cozy! There was no available space at the ashram, but just a few days later there was! So a short time later I smoked my final cigarettes, sitting in my car.  Victory at last!  I still remember the sensation of feeling the crisp New Mexican air stimulating me from my nostrils to my lungs.  From the beginning, I did sadhana and  took as many yoga classes as I could, and I went to every Yogi Bhajan lecture.  I had miraculously dropped all of my unhealthy habits, just being there with Yogi Bhajan nearby.  And sure enough, after a short time, I experienced a physical shut-down as my body cleansed and began healing itself. 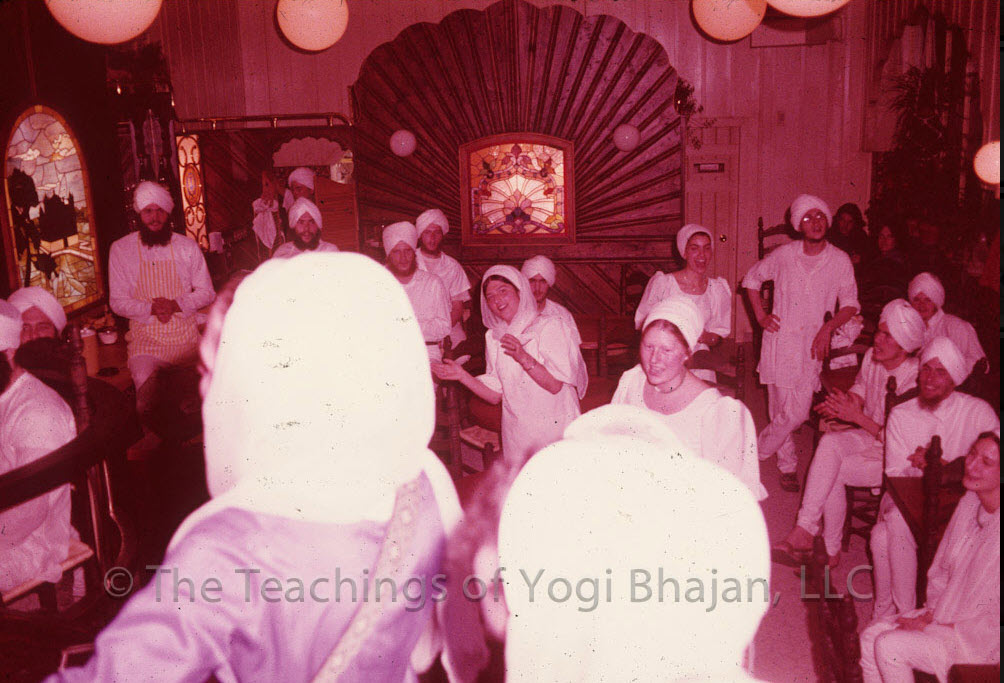 I worked at the Golden Temple restaurant in Santa Fe and in the ashram office transcribing Yogi Bhajan’s lectures from audio tape to paper.  What a blessing!  I spent the time with 11 other single women in the Gold House, a small community doing seva, learning  yoga and meditation, and practicing Sikhism, chanting  Gurbani Kirtan with the great teachers Yogi Bhajan had brought from India. This was completely transformative.

A 38 foot fall had damaged my spine 25 years earlier, and the next summer I became seriously bed-ridden for 3 months or so.  During that time, still in bed on the Khalsa Women’s Training Camp site, I listened to Yogi Bhajan’s lectures through an open window, read the Sikh Banis,  and learned Gurmukhi.  What an opportunity and blessing!  Wahe Guru! 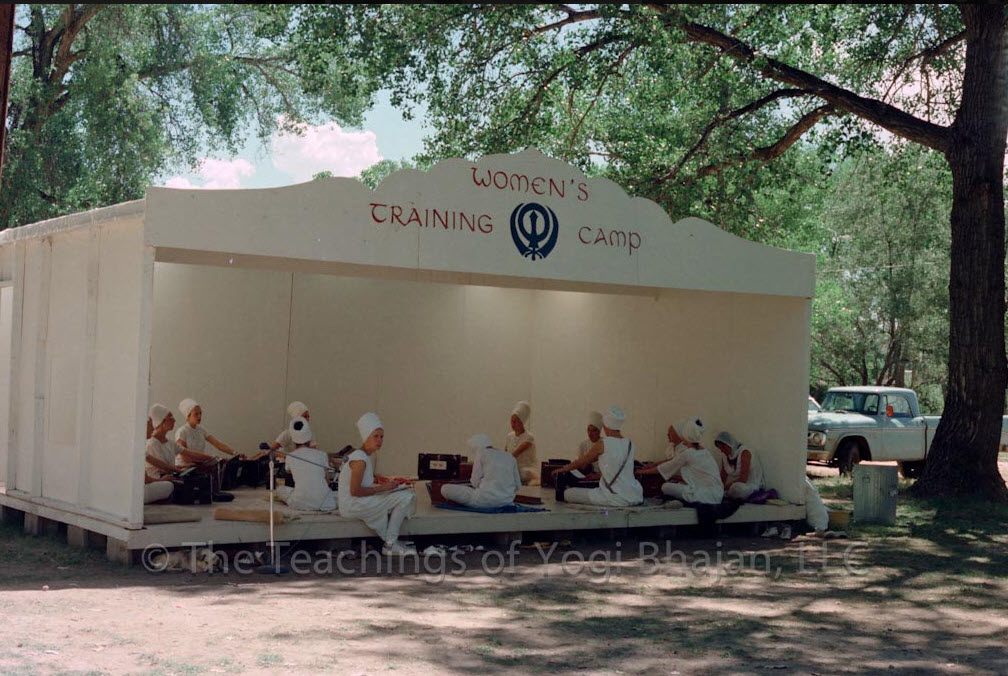 Some friends took me to see Yogi Bhajan at the Ranch.  Getting into and out of the car was a torturous experience, but walking into his living room the excruciating pain I had felt in my back and legs completely disappeared.  Another miracle!  Without any conversation, the Master instructed  me to lie down on the floor (which I did easily considering I could barely walk at the time), and  he guided  me through the 3 exercises I should do every day to heal my back (1. spinal twists sitting on the knee with the hands on the shoulders, 2. lying on the back alternately bringing  knees to the chest then extending the legs straight, and   3. lying on the back – alternately scissoring the legs out to the sides and crossing at the center) .  At his suggestion, I also hired a caring shakti to rub sesame oil into my lower back and legs. After that experience, I slowly improved and was able to resume normal activity.

White Tantric Yoga challenged  my back, and my sacrum and  lower spine rebelled.  During a break, Yogi Bhajan took me aside and had me lie down onto my stomach on the ground.  Several Chiropractors and healers watched as he repeatedly pressed down and released the sacral area, as though giving CPR.  He said my “Respiratory Boot” wasn’t working.  Apparently, the triple curvature and twists in my spine had prevented the flow of Kundalini energy up my spine. Yogi Bhajan to the rescue!  I completed White Tantric Yoga that day. 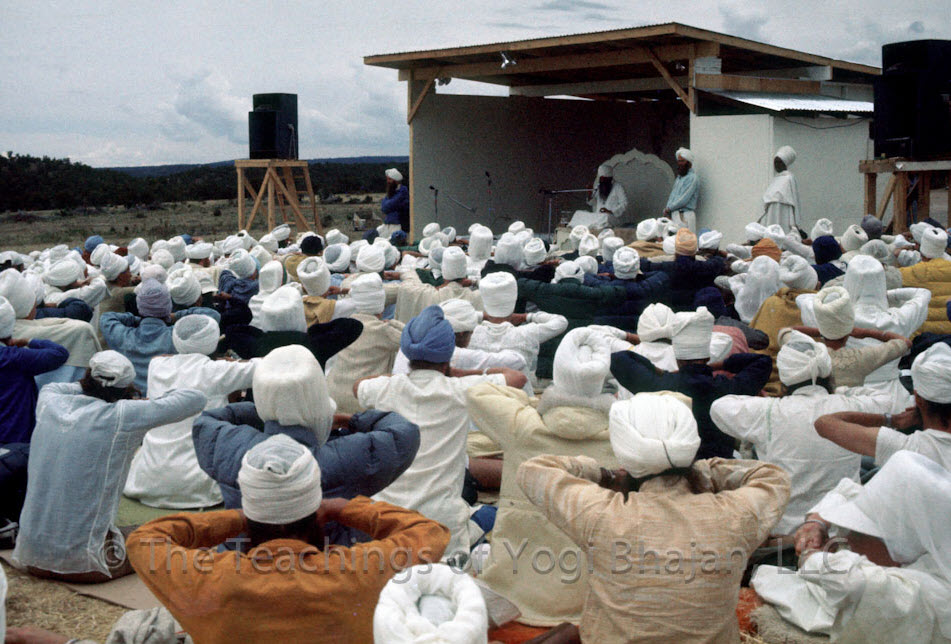 During the 1977 Summer Solstice, Singh Kaur, the “singer with the voice that could heal anyone” began hounding me to meet a wonderful man.  I told her I wasn’t interested in marriage, but she persisted, and when Karta Purkh Singh and I were at the ashram at the same time, she introduced us.  He had been unloading a potato truck, and  his dusty smile touched my heart, but …  I shared the concerns that I had with Gurmukh Kaur, and she said, “Why would you even hesitate.  He’s a saint.”  Well, okay then, I thought, I might never have another chance to marry a saint.

At Ram Das Puri, Karta Purkh Singh proposed, and I didn’t exactly say “Yes”, but I was introduced to all of the residents of the Kansas City ashram as his fiancé.  It felt like the entire Universe was pushing us together.  As we were standing at the edge of  the Tantric site, I looked at Yogi Bhajan, who was sitting in Gurdwara about 50 feet away, and mentally projected, “I don’t know.”  I immediately felt our auras swirling above our heads and felt that Yogi Bhajan had “married” us on the spot.  Wahe Guru!

After Summer Solstice, I drove to the LA Ashram for more Chiropractic treatments by Wahe Guru Singh Khalsa DC, and Karta Purkh Singh returned to Sat Tirath Ashram.  In December, I joined him in Kansas City, Missouri, and we drove to Winter Solstice together. There, I married the man I had spent just two weeks in person with, along with eight other couples in that sacred walk around the Guru. It was truly a community experience.  Our journey together continues at Sat Tirath Ashram, reflection of Truth / Place of Pilgrimage in Kansas City, Missouri.