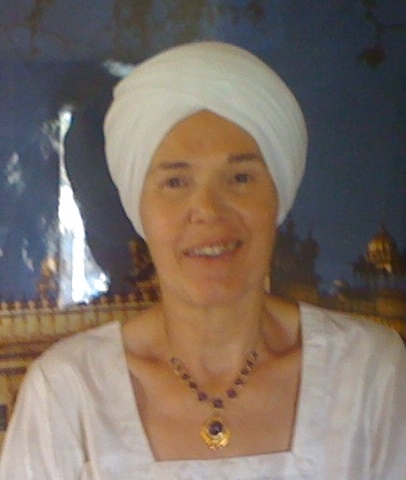 This article is reposted from Pioneering Punjabis Digital Archive (ucdavis.edu)

Siri Pritam Kaur Khalsa was born in Germany and grew up in a small Bavarian town during the 1950’s.

Family, school and community were traditionally Catholic. Her deep devotion for things spiritual took hold at an early age.  Germany’s many ancient churches are filled with beautiful art, paintings and statures of saints, centuries old, where the prayers of generations can be felt.

Hers was a business family. They owned a local hotel and restaurant. As was the tradition, she was encouraged to go “out into the world”, learn about other countries, acquire fluency in foreign languages, widen her horizon and ultimately return home to carry the family business forward.

So at the age of nineteen Siri Pritam packed a suitcase and took a train to  nearby France, where for an entire year she took classes at the Sorbonne and lived  in then not yet famous town of Cannes on the Cote d’Azur, as well as the isolated island of Corsica, all the while learning about local culture, language, foods & customs.

Then at age 21 it was time for the next step, yet another language:  she had the opportunity to come to the USA, which offered so much new, so much excitement, so many opportunities.

Fortune and possibilities continued: she found a position with Hilton Hotels in San Francisco, started College courses, had her own apartment and absorbed as much as she could from this new continent and the warm California sun.  All the while, the “Consciousness awakening” was happening right outside the hotel and on the college campus. Flower children, free love and higher vibrations beckoning.

It was against that background, that “Zeitgeist” that things inside her begun to change. Siri Pritam Kaur was drawn to the heartfelt openness, comparing it to the traditions she was on track to follow. She had her whole life ahead of her, and important decisions to make – but needed time, time to process and understand it all.

In time this inner search led to experiencing Kundalini Yoga in an ashram in nearby San Rafael. There, in a huge Victorian mansion, about 30 young people lived together, studied kundalini yoga, meditations, kriyas and lived a vegetarian lifestyle.

The day started @ 4 am with cold showers, 2 hours of yoga, mediation & chanting followed by communal breakfast. The year was 1973. There was such desire amongst the young seekers to belong, to achieve an “universal consciousness.” Yogi Bhajan, the inspired & powerful teacher of Kundalini Yoga who was also a Sikh, a monotheistic religion.  Its holy book is called the Siri Guru Granth Sahib, which contains teachings written by Guru Nanak, the founder of the Sikh faith and other saints and sages of the time.  Yogi Bhajan visited the ashram periodically, teaching about healthy living, nutrition, relationships & child rearing; but mostly about the Age of Aquarius, the coming change in times. He told us he had come to the West not to seek students but to train teachers who could help others cope with the coming change and the instability that will accompany it.

Marriages happened, first on the green sloping hills of Golden Gate Park, then at the ashram, as we tried to follow our teacher’s path, incorporating Sikh practices. We learned much from Yogi Bhajan. We heard about the source of his wisdom, the Siri Guru Granth Sahib. He shared freely about the Punjab, his homeland and his Guru, Guru Ram Das and the Harmandir Sahib in Amritsar, Northern India. So many stories of bravery, devotion and a rich tradition of sacrifice.

Many early students had traveled on a powerful yatra to Harmandir Sahib in 1971 where Indian people for the first time saw white folks wearing bana, traditional Sikh clothing, and taking Sikh vows (commitment to a life of purity) .  Back home, Vegetarian Restaurants opened up in several cities, aptly called “Golden Temple Restaurant”.

In 1974 Siri Pritam Kaur (by then still Gisela Gehret), after a brief introduction, married Pritam Singh at Hargobind Sadan in San Rafael, California. As was often the case, their names were matched after marriage. He came from Tulsa, Oklahoma, similarly inspired by the teachings.

These were high times, with many 3HO (Healthy Happy Holy) ashrams popping up, children born and enterprises started. We had regular Gurdwara (Sikh services with Gurbani kirtan), while learning aspects of Sikh traditions.

The ashram moved across the Bay to another big house in Berkeley, our home for many years. By then a deeper understanding of the Sikh way of life had set in: several ashram members became excellent musicians or ragis, singers of Sikh devotional songs. We learned to read in Gurmukhi, the Sikh spiritual language. Many of us had taken Sikh vows, wore turbans and bana wherever we went – we certainly stood out.

For Siri Pritam this was the time of commitment and devotion to the Siri Guru Granth Sahib as source of timeless wisdom. It solidified her connection to the path.

In 1984 Pritam Singh was now a Doctor of Chiropractic. At the suggestion of Yogi Bhajan, we moved to Yuba City to start a practice. We now had three children.

Siri Pritam helped manage the practice. Right from the start they held  yearly Akhand Paths (72 hours continuous reciting of Sikh scripture) after which in a spirited gathering of the community, the 3HO musicians played beautifully to the enjoyment of the local Punjabis. Pritam Singh became known as a dedicated and gifted healer.

Dr. Pritam Singh and Siri Pritam Kaur became part of the local Sikh temple, participated in the annual Guru Gaddee Day parade, helped with Khalsa children’s school & in many other ways as well. Siri Pritam offered Kundalini Yoga classes which continue to this day. Siri Pritam was part of a group of local Sikhs publicly and forcefully speaking out against the atrocities of 1984 perpetrated against the Sikhs.

Of note is that in the 1980’s there were hardly any Punjabi or Indian doctors in Yuba City. “White” Sikhs were initially looked at with consternation, but soon became accepted.  During the summer months we often stayed open until 7 or 8 p.m. to see the farm workers once they finished their day.

In the early 1990’s with the influx of many Punjabi doctors, Siri Pritam & Pritam Singh became founding members of the Punjabi American Heritage Society.

Their three children attended Miri Piri Academy, an American Sikh school, near Amritsar, India, for most of their school years. The tragedies on 1984 forced the school to Mussoorie, Uttar Pradesh, for a number of years.

In 1989, fulfilling a need, Pritam Singh, using his own resources & expertise, founded a physical therapy clinic, now owned and managed by Siri Pritam Kaur, serving physicians and patients alike to this day.

After almost two decades in practice Pritam’s health declined and he passed away in 2002 – much too early, but in Yogi Ji’s words: “He was never of this world, he just came to pay his karma”.  Yogi Bhajan himself passed away two years later.

Siri Pritam’s three children are all grown. At the time of this writing, she has four grandchildren. They follow in her foot steps and are in their own way, inspired and powerful Gursikhs.

She is continuing her involvement with the Punjabi American Heritage Society as well as the local Sikh Temple, deeply thankful for the many life long friendships with Punjabi families that have been such good and loyal friends through the years.

Her devotion for the Sikh way of life has matured but not changed. Her love for Sikh devotional music is the main stay of her life.

She has been a bridge in so many ways: from the “American” Sikhs to the Punjabi community in Yuba City, to the community at large creating understanding of the Sikhs.  Also to the many patients and people who have come through her Yoga classes, her physical therapy clinic and other ways throughout the years.

As for her public life, she served in many ways, including on these boards: 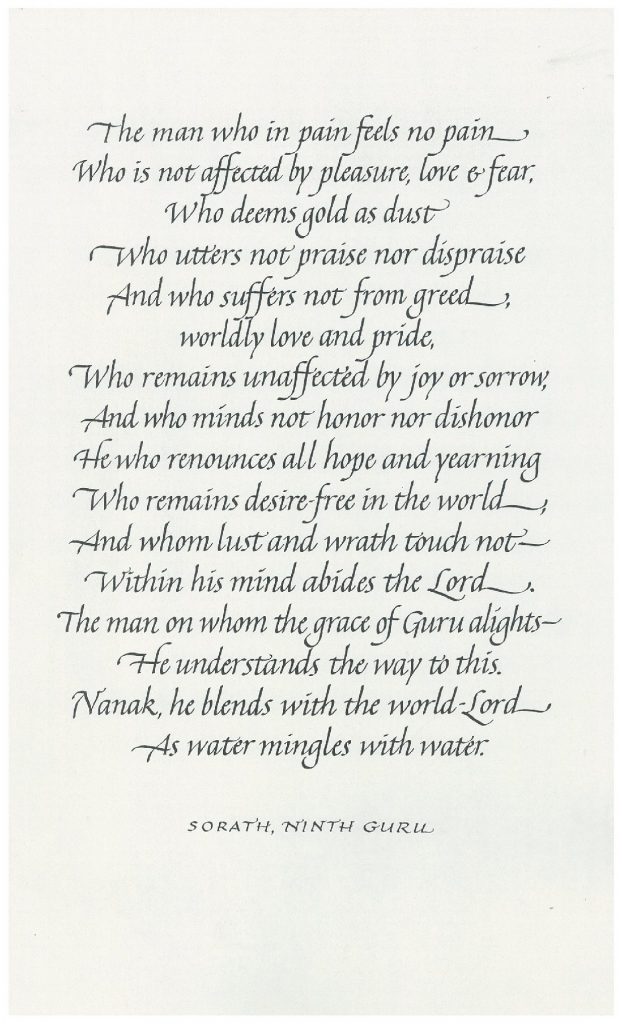