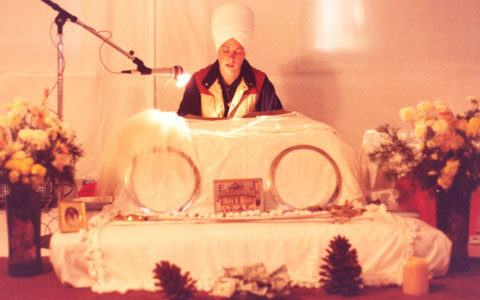 In 1971, I was living in the Tucson, Arizona, ashram, while trying to keep up with my studies of Anthropology at the University. In those days Sat Nam Singh, the ashram director, ran a tight ship. Sadhana began at 2:00 a.m. I was also expected to attend 7:00 a.m. yoga classes.

There was barely enough time for me to eat breakfast and make it to my 9:00 a.m. University class. You have to realize, in those early ashram days we weren’t encouraged to follow an academic pathway. The yoga classes were life-changing for me, so my destiny was charted.

But I had made a previous commitment to go on an archeological dig in the foothills of Mount Lemmon, the highest point in the Santa Catalina Mountains. That’s the thing to know about me—I live by my word. So in the midst of trying to be a yogi, I went on this dig, before quitting university.

In those early days, we were not “educated” about the Siri Guru Granth Sahib. We would keep the volumes respectfully covered, on a shelf or a mantelpiece. We would simply be encouraged to take down a volume, open it to a page randomly, and read its words. To this day I still remember how it made me think and contemplate. Even with our lack of knowledge, there was always an innocence and utter respect for the Guru.

I’ll never know exactly how Sarb Jit Singh and I got hitched up. Probably because we were around the same height (I’m five feet tall). One day in the fall of 1971, Sarb Jit Singh asked me out to lunch, and then a bit later to marry him, and four days later it was our wedding day.

The event took place in the garden of someone’s beautiful home in the desert outside Tucson. The wedding rounds [of Guru Ram Das] were read in English from Peace Lagoon. Singh Sahib Sat Nam Singh, our Sikh Dharma Minister, decided that we should walk around the house four times for the wedding rounds .

The next day, we hosted a full moon meditation at the ashram. It was a large gathering that included folks from other spiritual communities. Sat Nam Singh gave a 15-minute talk about the blessing of honoring Mother Earth by giving back to her from the gifts She gives to us.  Under his direction, all the food was loaded on our plates and then taken out to the compost pit—including the remains of our wedding cake!

Sat Nam Singh had a map on the wall, with tiny flags designating all the places in the United States where ashrams were already established. That’s how we ended up in Oklahoma!

Two days after getting married, Sarb Jit Singh and I went to Phoenix to see the Siri Singh Sahib (Yogi Bhajan) for the first time. We asked him to give us our spiritual names and for his blessings to move to Oklahoma. I remember that he said our names meant “all victorious.” I thought—what an interesting name for two little people!

There were many varieties of Christians in Oklahoma, and in those days there was no one who looked like us—dressed in all-white bana, looking a little like nuns, I suppose. Yet I clearly remember how kind, gracious and helpful everyone was, even though they would proselytize and want to make us Christians. We always accepted their invitations to attend their churches.

Coming from the East Coast, I was impressed that they never regarded us as weirdos. They were respectfully curious and asked what religious group we belonged to. They called us “genies”—never “diaper-heads.”

In the beginning, we lived in a little second-floor apartment, but in order to teach yoga classes, we needed a house. Fortunately, I had a family inheritance of $3,000 that allowed us to buy a fixer-upper. We made a bunch of flyers, posted them on every bulletin board, and started teaching yoga in our house, as well as at every college, university, YMCA, and even on an Air Force base.

In those days only the men wore turbans, so it was easier for me to get a job where I was visible to the public.  My first was at Dairy Queen. Sarb Jit Singh took a job as a night janitor at one of the country’s first huge Target stores. Funny story: Sarb Jit was, as always, very diligent in his job; he would pick up every little piece of paper tossed on the floor and put it in his pocket before sweeping the floor.

One night the place was raided by the police. Apparently, word had gotten out that the night janitors had been stealing. The police lined up every worker and had them empty their pockets. Sure enough, every single one of them had stolen products in their pockets—except Sarb Jit Singh, whose pockets only contained bits of paper! The police were so impressed that Target gave him a day job, where he was in the public eye, wearing his turban, of course.

Thanks to another bequeathment from my great uncle, we were able to open a Golden Temple natural foods store in Oklahoma City. We rented a place in a shopping mall, found shelving and a used refrigerator unit, etc. I painted everything—that’s probably when I learned to become a house painter. 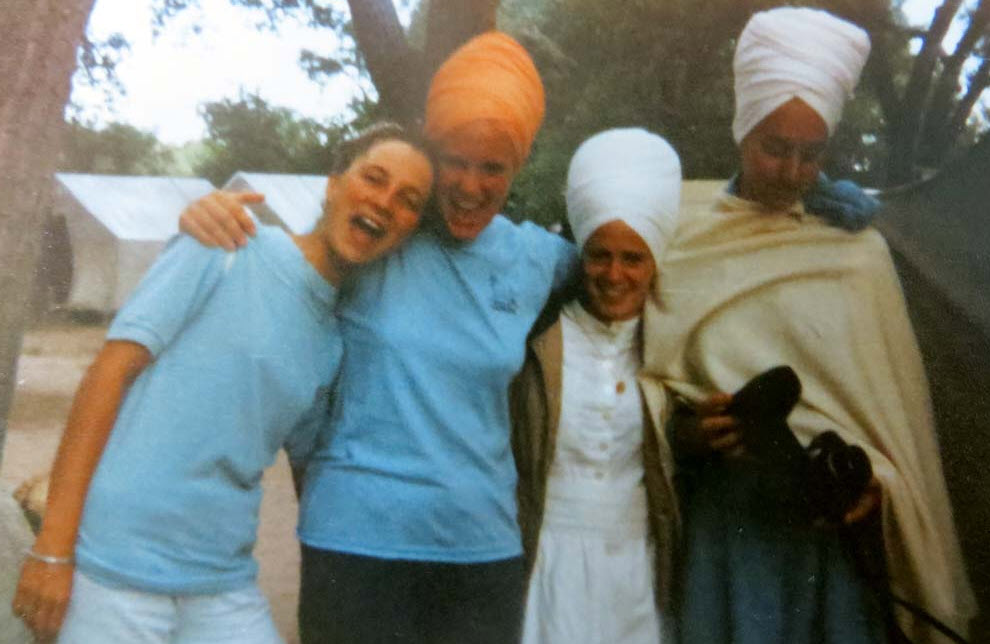 My experience at KWTC was life-changing.  In 1975, right after 3HO Summer Solstice in New Mexico, the Siri Singh Sahib invited all the women to stay for a “ladies” camp, and men were also invited that first year. Sarb Jit Singh returned home to manage our health food store.

The women’s camp was completely run by volunteers. Someone would ask, “Who wants to cook breakfast tomorrow?” and many would raise their hands.

I was such an “eager beaver” to volunteer for everything that at some point someone said, “Sarb Jit Kaur, you can’t volunteer for this because it conflicts with your other seva!” It took about three years before there was paid staff. Grounds, Logistics, and Security were my areas.

The reason KWTC changed my life was that it was when I became immersed in the teachings, having the Siri Singh Sahib with us every day. I was always working; I’d be drenched with sweat; I’d get into an ice-cold shower; rush to get into my nicely-ironed kurta and arrive just in time for class.

I was like a young tree, sucking up all the nectar, and it made me who I am. Of course, not everyone had my experience, but to me, it was the most precious gift on the planet.

I have had such a blessed life. Even in the most challenging, seemingly impossible circumstances, I would somehow make them acceptable, tolerable to myself. I don’t know fully how I got to be this person, but it’s a never-ending blessing and it continues to be a blessing.

SS Sarb Jit Kaur Khalsa began Kundalini Yoga in January 1971 and in that same year moved into the Tucson Ashram, married Sarb Jit Singh, received her spiritual name from Yogi Bhajan, and attended the first 3HO Winter Solstice in Florida! Sarb Jit Kaur says, “I loved Solstice from then on—so much so that I prayed to live at Solstice. In 1990, my prayer was answered when I moved to Ram Das Puri (home of 3HO Summer Solstice) in New Mexico, where I still live. I work for Kundalini Research Institute (KRI) as the administrator for the Aquarian Trainer Academy, the school for teacher trainers. I love my job, as it allows me to serve this mission.”