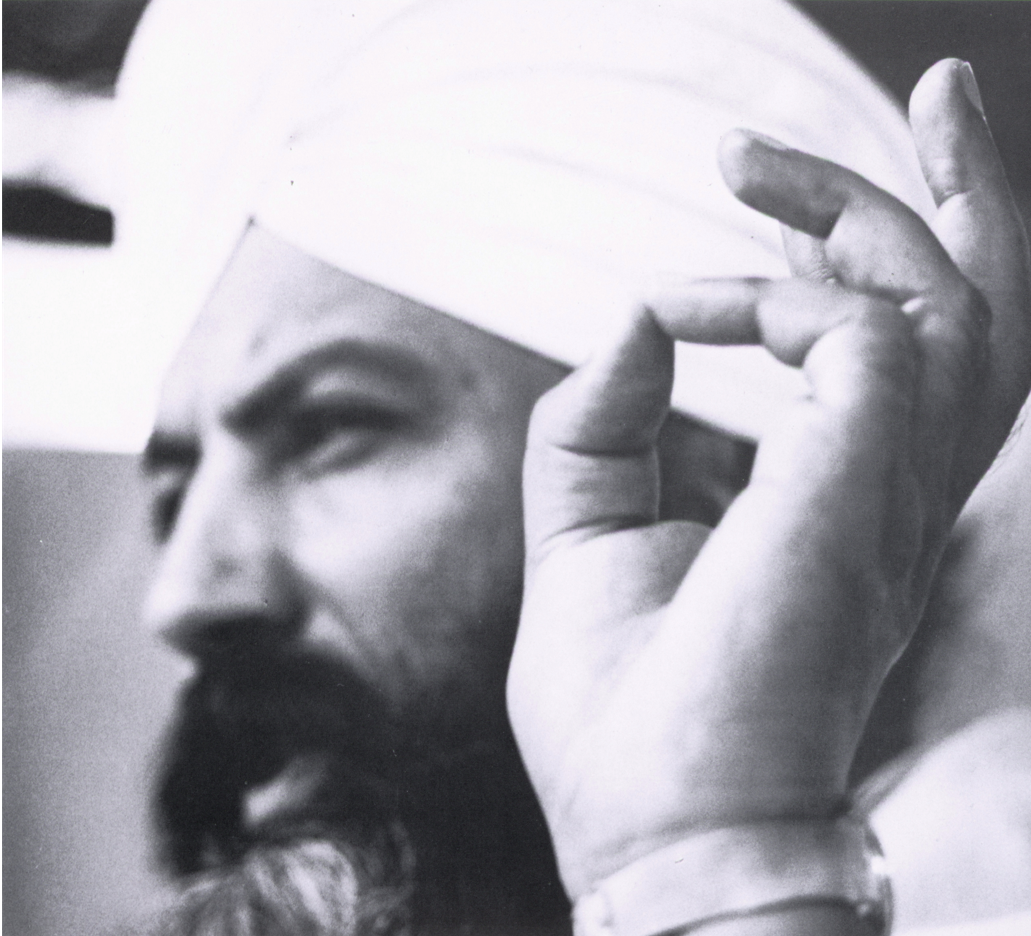 In a meditative mood, sit in a comfortable cross-legged position. With palms towards the face, cross the wrists at ninety-degree angles to each other. The palms are at the level of the eyes making the wrists cross at about chin level. The wrists are ten inches from the nose. This is a particular area in the psychomagnetic field. The right wrist is closer to the face for both male and female. Do not separate the thumbs from the side of the hand. Keep the fingers, wrists and forearms straight.

Focus the eyes at the three lines on the wrist. These lines are known as the “wrist bracelets” or “healthy, happy, holy“ lines.

This mantra translates: Sustainer, Liberator, Enlightener, Infinite, Destroyer, Creator, Nameless, Desireless. One complete cycle of this meditation is one inhalation followed by three repetitions of the mantra on the exhale, which lasts at least twenty seconds. It can take longer if the breath capacity is greater.

Begin with eleven minutes of practice and slowly increase to thirty-one minutes.

This meditation is a very powerful treasure. Ancient science taught that pre-written death can be completely rewritten. When you correctly chant this mantra eleven thousand times in this position, it is known as vaachak siddhee. This enables the practitioner to manifest any positive wish and to erase any negative thing in one’s personal destiny.

There is a beautiful story about this meditation. Once somebody who had an enemy learned this meditation. He recited the mantra very correctly each day, but it didn’t produce the effect he wanted. He was very upset. His enemy was becoming extremely rich and, though he had been very sick, he was becoming healthy. Everything was happening right for his enemy.

So the disciple went to the Guru and said, ‘Sir, I told you I wanted to perform a miracle.’

And you gave me Vidhee, the technology. Am I doing something wrong? Would you check me?

He checked him and said, ‘You are perfect.’

‘Then why isn’t it working?’

He said, ‘Do you wish death to that person?

‘Then he will never die. You have done so much japa that not only will this person be healthy, his life is now extended. He was to live for four or five months maximum. But because you have been chanting this regularly for six months, you have stretched his life by that much. He was to become very poor, but now he’s going to become richer and richer. What will happen is that he will have so much that he will give it away, and nobody will commit theft.’

I am just translating what is written in the ancient scriptures. It was written on bamboo leaves by sages who were in their divine consciousness and who knew what this mantra could do. ~ (January 26, 1976)

“Mantra is nothing but a telecommunication of the finite unto the Infinite. The individual creates a frequency of vibration within his electromagnetic field to tap the electromagnetic field of the universe. When you chant a mantra or do a meditation, that is how it is.” (February 2, 1976)

“Meditation is nothing but the medicine of the mind. It develops character. When a person closes his eyes to meditate, it reminds him how weird he is. If someone else tells him that he is weird, he will become defensive.” (March 18, 1976)

“Sometimes we misunderstand what a mantra is. Mantra is any sound which can make the finite unite with the Infinity. Some people ask, ‘Why should we keep on chanting, Ram, Ram, Wahe Guru, Wahe Guru, Wahe Guru, Sat Nam, Sat Nam, Sat Nam?’ Or ‘Why should we pay $150 for a mantra? The fact is very simple, my friends. Whether you pay for it or you get it for free, it is something which is yours. The more you repeat it, the sooner you will master it. Mastery comes when you hear the mantra from the Cosmos. That is the perfection of the mantra. Suppose your mantra is Sat Nam. This entire Universe should sing Sat Nam to you.” ~(January 19, 1976)