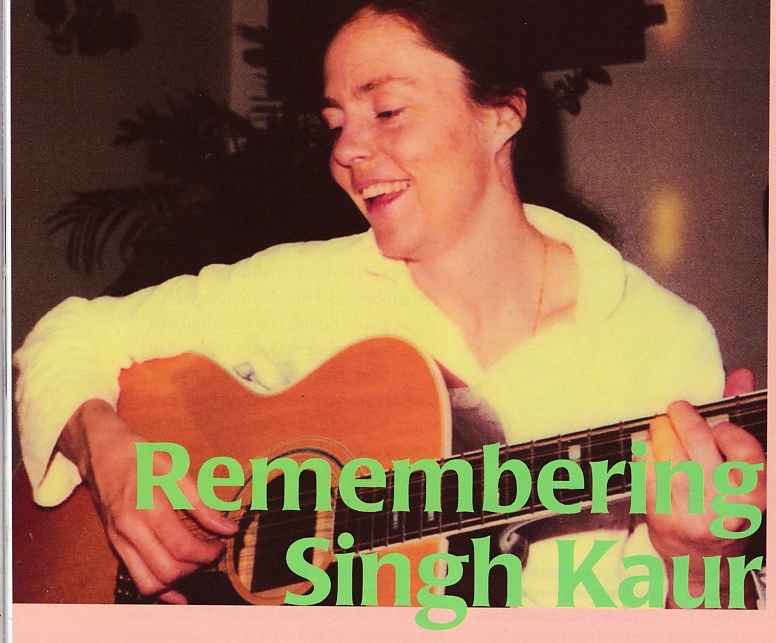 This article was originally published in the Winter, 2005 issue of Aquarian Times and was written by Sat Kartar Kaur Khalsa. It is a tribute to Singh Kaur, who passed away in 1998.

Before Enya, before Deva Premal, and before today’s burgeoning chant music movement, there was Singh Kaur.

During that time, I traveled to many 3HO ashrams as a chant vocalist and kirtan teacher. Everywhere I went, two things were always a given:

1) you would always smell the warm cinnamon aroma of Yogi Tea cooking, and

2) you would always hear Singh Kaur’s voice emanating from the stereo, bringing a heavenly frequency into the spaces where we were growing a spiritual life.

These sense memories, along with the music legacy she left, remain today as cornerstones of 3HO historical culture and tradition.

Amar Singh, a multi-instrumental musician who worked extensively with her, recalls: “We were sitting in the St. Louis airport with Yogi Bhajan, who was waiting for a connecting flight to New York. He asked Singh Kaur to put Rakhe Rakhan Har to music. I was sitting next to her as Yogi Bhajan tapped out the heartbeat rhythm on an empty styrofoam cup. I wrote the rhythm down, and when we got home, we put the rhythm into Singh Kaur’s drum machine. This is the beat heard on the final recording. The next day, I went off to work. When I came home that evening, I asked Singh Kaur about it, and she played a rough recording – basically the finished piece. She had sat down in the morning and the music just flowed through her. I was always amazed and awed by her ability to put the perfect music to any words that came her way – English or Gurmukhi.”

Sat Jivan Kaur, her close friend, recalls, “One night at Winter Solstice celebration in Florida, around 3 a.m., I was stirred awake by this beautiful sound. I arose and went through the camp, to see where it was coming from. Finally, I came upon the gurdwara. Singh Kaur was literally singing the Siri Guru Granth Sahib. I sat and listened in near-tearful awe, then went and asked security to broadcast it through the camp. She had no ego, and she’d let anyone chant with her. I loved singing with her.”

My own approach to composing and singing was expanded in one of our mutual hold-each-other-up conversations. One day I told her, “I just can’t get the tune or words on this song to come out right. I feel so blocked.”

“Silly girl,” she said, “don’t you know that the song has its own spirit? If it wants to visit you, it will come and play you.” Play me? “You’re the instrument that the song is playing upon. Works much easier that way, you know,” she explained. My perception of the musical process has never been the same since.

Toward the end of Singh Kaur’s life, violist Sahib Amar Kaur played on two of her ethereal recordings, Fairy Night Songs and This Universe, released on Sequoia Records.

Sahib Amar recalls: “She told me that she wanted This Universe to be her gift to the 3H0 family. I think it was her way of saying thank you, and of making peaceful closure with everyone. Up to the very end of her life, she was always creating music for all the rest of us to enjoy.”

The Music of Singh Kaur

Sat Kartar Kaur has performed and facilitated sacred music experiences worldwide for over 40 years. She has her own recordings and CDs and is an original member of the Khalsa String Band.  She has sung on many other chant artists’ recordings, including Krishna Das.  Sat Kartar Kaur’s music is available on  SikhNet, Sat Nam Europe, and  Invincible Music.