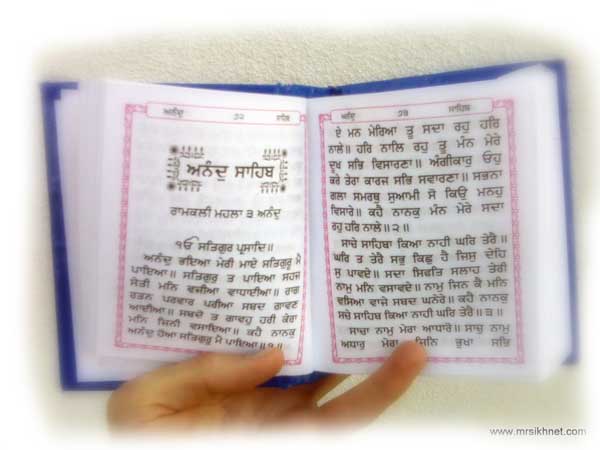 Written by Kartar Singh of Sterling, VA, USA in 2017

Let me be clear—I don’t currently read my banis every day, although I did so as a daily practice for many years. So let me speak honestly and openly about the topic of resistance.

Three times the Siri Singh Sahib told me—all unsolicited—to read my banis daily. During my interview to become a Sikh Dharma Minister at Summer Solstice years ago, MSS Shakti Parwha Kaur also told me to read my banis every day.

So, I used to read daily from a Nitnem and eventually I memorized Japji Sahib so that I could walk or drive and recite it. I gradually memorized So Purkh as well as Mere Man Loche and Kirtan Sohila.

For many years my wife, Shakta Kaur, and I have shared profound experiences with the Shabd Guru. The Siri Singh Sahib once told us to walk five miles a day, holding hands and chanting Wahe Guru. We did it for many years, continuing long after resolving the situation for which it seemed to have been given. Last year, on our 39th wedding anniversary, we committed to doing it again and we’ll continue at least until our 40th anniversary at this Winter Solstice 2017!

Several times in my life, I have had the experience of using a mantra or shabd until I dissolved into shuniyaand I knew that the solution to the particular issue had been granted. I can still recount exactly where I was at those moments.

One of my challenges—probably the greatest challenge—is consistency: to always know that I’m a creator—Kartar—consistently self-actualized, showing consistent self-authority. When I don’t trust in myself as a creator, my thoughts often become self-sabotaging. And that’s when Shabd Guru really comes to serve me.

What has helped me the most with consistency with the banis and shabds was advice that Siri Singh Sahib Ji gave me: “Don’t do it out of obligation, my son, do it out of love.”  This is the lever I use to uplift myself, in which an act of obligation transforms into an act of love. In this state, I have sometimes experienced a sweetness in my lips and mouth as I recited.

The Pair of Opposites

There will always be resistance to a practice like reading the banis. When we set a focus on something, its polar opposite will appear. It has to—otherwise, there would be no way to sift and sort through our experiences and thoughts to hone a higher and truer version of the reality of ourselves that we’re creating.

As I have walked this Dharmic path for 40 years, I’m just beginning to enjoy a relaxed sense of resistance as something natural, predictable, and essential—something I’m more and more able to be even thankful for, something that can lead me to gratitude. For it is in acknowledging, allowing, and appreciating something that it lets go of you.

[Author Note: SS Dr. Sant Singh published a beautiful English translation of Jaap Sahib. It retained the male pronoun, but if you look at Jaap Sahib in Gurmukhi, that pronoun is not there. My wife, Shakta Kaur, used his translation and simply took those pronouns out. She gave a copy of her version to the Siri Singh Sahib, and I remember that one of his staff commented quite favorably about it. Shakta gave a copy to Dr. Sant Singh also.]