Shaktis Stepping Up as Leaders in the Aquarian Age 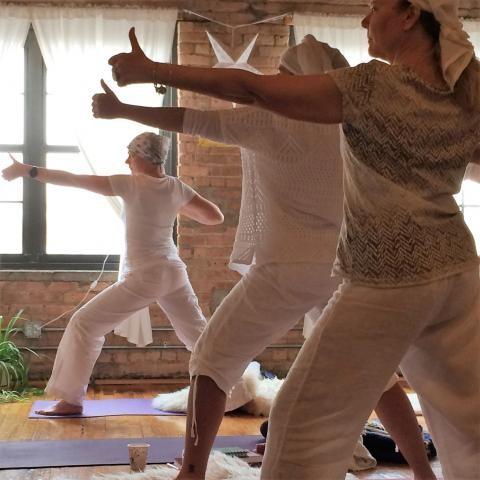 Written by Shabad Kaur (sometime in 2018)

“The one thing woman has to remember is that whatever the time and situation may be, she has to be a creative leader.”  Yogi Bhajan, July 20, 1984

Huge winds of change are rolling in around us, toppling patriarchal structures and creating a true shift in consciousness. We can either attempt to hide from these forces or step forward to reclaim our power, sailing forward and joining the forces of change to arrive in new places of confidence and empowerment.

What are the unique strengths that women bring to the table as leaders?

Words that Penetrate the Heart

First and foremost, the ability to consciously communicate:

“You want to be a leader, you should be a leader. But the faculty which makes you a leader is when your word is effective. It goes to the heart of another person. The other person understands it deeply, accepts it and then has the courage to follow it. This kind of leadership is needed. That lives.” ~Yogi Bhajan, April 5, 1995

One year, during Winter Solstice week, at the Baba Siri Chand ashram in Florida, I was serving in the kitchen as Yogi Bhajan was discussing the programming offered at the Children’s Camp at the Solstice site. Someone mentioned that they were organizing archery as one of the activities for the children. He shared, “I mastered archery as a child so that my words could penetrate into the heart of someone.”

In fact, Archer pose (Vibhradhasana) is a fitting metaphor for the embodiment of Shakti leadership:

Another quality of female leadership is the ability to see things in a circle, rather than a more masculine, linear perspective. This allows for constant expansion, inclusion of new ideas and the creative use of resources. If we consider process vs. product, for women, the process IS often the product.

In Wisdom Circles from many tribal cultures, and especially from matriarchal cultures, this process creates a mandala shape. When people share in a Wisdom Circle, there is no interrupting, no ‘fixes’ or ‘remedies’ offered. It’s about growth from diverse perspectives and wisdom that is shared. The process requires respect and results in birthing deepened relationships, increased connections, and forges trust. The group begins to recognize that, yes, we are a team, we are a family!

In a circle, deep listening occurs as other voices, other opinions are considered before proceeding into action. A leader fosters cooperation, whether it’s mission-driven or task driven. She empowers others and creates authentic community. It’s a very Aquarian style of leading!

To be a conscious and effective leader, we need to always remain teachable. This means being willing to grow…. a leader never stops learning, is willing to set aside the ego and evolve. We need to be able to apply our wisdom to uplift someone. If there’s rigidity and stubborn attachment, the community won’t grow, or they’ll move past the leader!

In contrast, a dictator (historically, most often a male) sets up a controlling, hierarchal structure, fearing others becoming greater than himself. A Shakti leader future-projects through generations (as Yogi Bhajan often encouraged us to do), inspiring others to be ten times greater than herself. To strengthen this skill, it’s ideal to work on cultivating the Neutral Mind, especially avoiding catty behavior in judging other women. We don’t have time for that, and it ends up disempowering everyone in the situation.

I recently taught an off-site seminar and arranged a sub for my weekly women’s class at our yoga center. Chicago experienced a snowstorm on the previous evening. When the sub came out to her car that morning to travel to class, she discovered that her car had been packed in by a passing snowplow. She had to dig out and ended up being quite late to class.

I learned later that several of our current Level 1 trainees had attended class (one of them thankfully had a key!) and when the sub was delayed, the trainees looked at each other and decided to go up and teach portions of their practicum classes that they had prepared to teach later in the training weekend. I was really inspired by their courage!

“…leader means taking the risk. Leader means going from the finite to the Infinite. Leader means putting the self on the side and jumping for all sides. Leader means not reaching but reaching out. There is a humongous unknown in the life of a leader.”  ~Yogi Bhajan, April 11, 1996

And finally, cultivate a strong sense of humor to keep things in perspective! A smile can often serve to create diplomacy in a tense or awkward moment.

Root to rise. Take the archer’s stance and answer the call. The breath slows, the focus sharpens…

“Woman has basic strength; that’s why Kundalini is called the mother power. If woman can live righteously to a standard of a pure woman, Kundalini Yoga will shine through her, and not only shine through her but the very touch of her will convert people into that experience. They call it the glow.”  ~Yogi Bhajan, 7/29/76

Shabad Kaur Khalsa, LCPC, LMFT, E-RYT 500, KRI Level 1 Lead Teacher Trainer. She is co-founder and director of Spirit Rising Yoga Center and Spirit Rising Foundation in Chicago, IL. She has taught Kundalini Yoga for 30 years, and as a psychotherapist, integrates the teachings into treatment for adults and couples. She is honored to have served Yogi Bhajan directly and has transcribed, edited, and illustrated several books including his women’s camp lectures, Master’s Touch and Flow of Eternal Power.

The health and empowerment of women through the teachings of Kundalini Yoga is a cause that is near and dear to her heart. She also specializes in Humanology, marriage, conscious birth, self-care, and health and wellness.