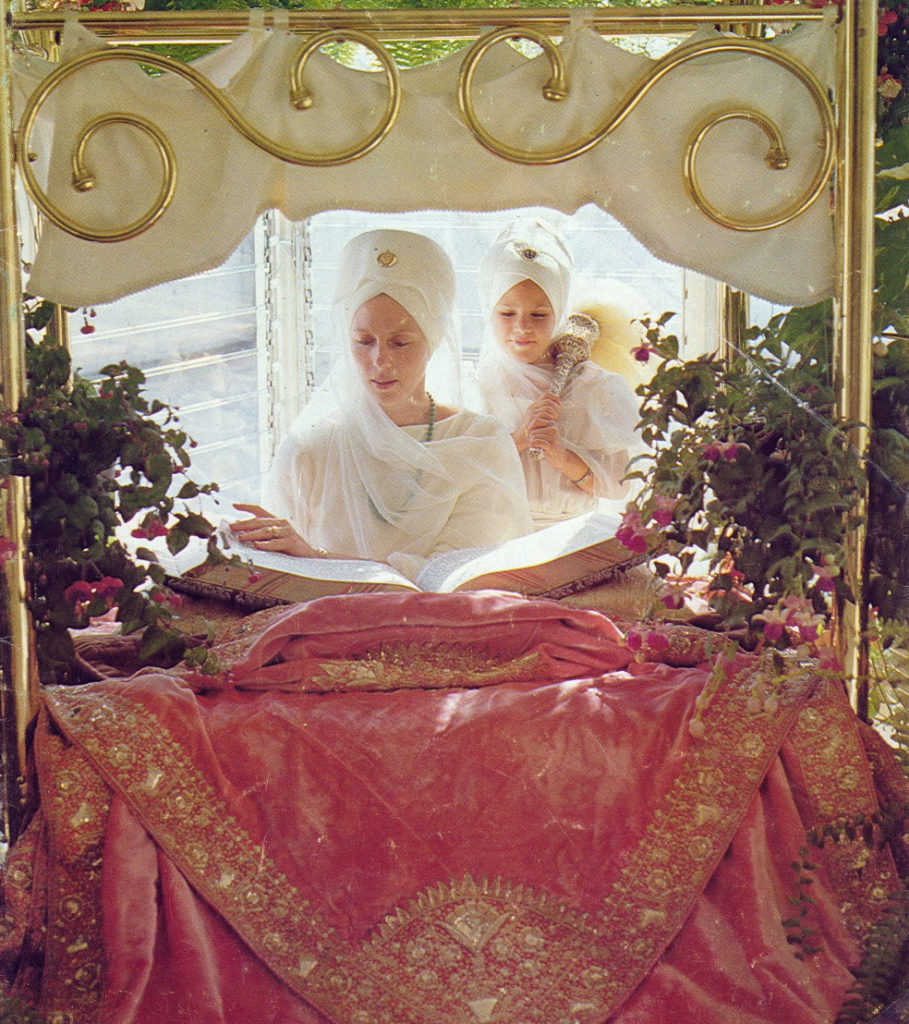 This lecture was published in the Summer 1984 issue of Beads of Truth.

Guru is the Guiding Word for the Sikh, the student of Truth. But what does the word Guru mean?

Literally, Guru means in the Sanskrit original, “from dark to light.” It refers to that technology, that source, which takes us from the darkness of ignorance to the light of God.

In the historic sense, Guru is the Word of God as spoken by the founder of the Sikh faith, Guru Nanak, who in his ecstasy of love for God sang about the nature of God and man.

The Sikh sings these poetic songs of Nanak, and so comes to love and live with the Guru’s word implanted in the heart, mind and soul. He may express that love of the Guru in many ways — the Guru is his breath of life, his sustenance, most personal friend, companion, source of divine wisdom and joy. The Word of the Guru is the path on which a Sikh walks. By obeying the word of the Guru the Sikh is transformed, healed and he becomes a source of light and wisdom for others.

Guru Nanak wrote his songs and passed them on to his successors who also sang God’s praise in their own poetic style. These compositions, along with others of the same divine inspiration were compiled by the Fifth Guru, Guru Arjan Dev, and brought together in the form of a Granth. A Granth, from the sanskrit root, means that which “ties one to the Infinite Master.”

The Tenth Guru, Guru Gobind Singh, added the poetry of the Ninth Guru, Guru Teg Bahadur and sealed the Granth forever so that no word could be altered or added.  He declared the Granth as Guru for Sikhs for all time and called it the Siri Guru Granth Sahib (Great Guru). Since that time there has never been, nor will there ever be any other Guru in human form for the Sikhs.

The Siri Guru Granth Sahib is what gives you the experience of your higher nature. For the Sikh it is the supreme living wisdom which removes ignorance (the cause of suffering) through its Truth and through the repetition of its powerful sound current.

It is the pivot point around which a Sikh’s mind revolves throughout the busy hours of the day. The Guru guides the mind to the experience that God’s light lives within the soul of mankind, and that God is One.

The Khalsa Council declared 1984 as the year of the Guru.  The following resolution was published along with the above lecture:

Whereas, the Khalsa Councils serves to determine the policy and guidelines for the growth of the Khalsa nation as the representative body of the sadh sangat, and

And the year 1984 being a year of the 84th cycle of the twentieth century, a number which represents the opportunity to transcend the pain and duality of the world through the power of prayer,

Recognizing that the Guru is the Word of Truth and this Word ids the beginning, the end and the present, the Word is what we worship, to the Word we bow, the Word we chant and the Word is our entire life,

And having acknowledged that our friend is Guru and our friend shall continue to be Guru and that being the only relationship which we seek,

Recognizing that the Dharma is established by the Will of God and through the Grace of Guru, and it is the destiny of the planet earth in which the birth of Khalsa shall be celebrated and will expand, grow and establish the rule of Truth,

We hereby resolve that the year 1984 shall be observed as the Year of the Guru.

View this article as it originally appeared in Beads of Truth in the Summer of 1984.