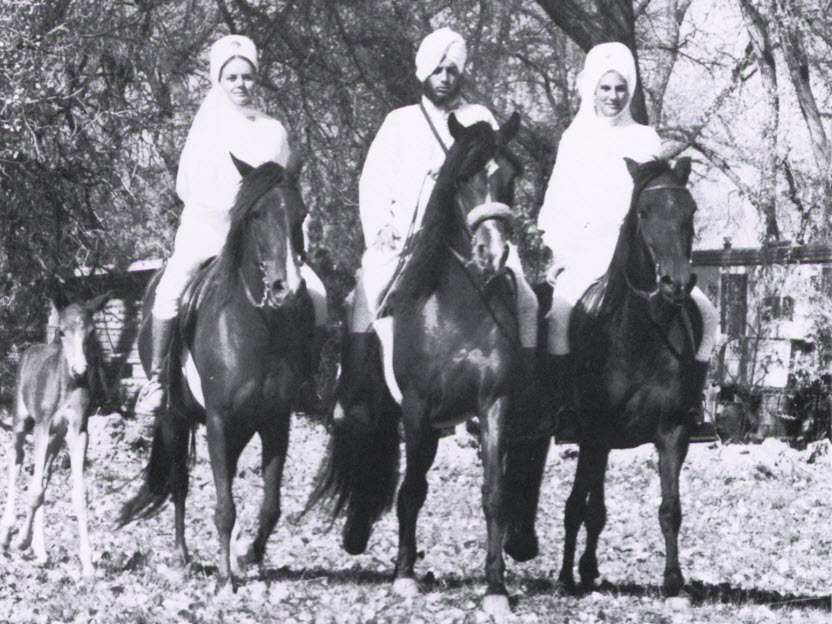 This passage by M.S.S. Gurutej Singh Khalsa (Tej Steiner) from Toronto, Canada appeared on pages 286, 288, 289 of the “Dharma” section of the book, The Man Called the Siri SinghSahib, which was published in 1979:

There is a pathetic irony in the fact that the ten Sikh Gurus created a religion by giving people an identity and a form, while today the main preoccupation of most modern-day Sikhs is to argue about their identity: “Who is a Sikh and who isn’t a Sikh?”

The Gurus answered this question by giving specific instructions on how to live the life as a Sikh or seeker.  They challenged their students to sacrifice complacency and self-indulgence for strict adherence to disciplined living.  They demanded that their students stand out, stand up, and understand how to sacrifice in the Name of Truth.  They laid down Rahit Maryaadaa, and proclaimed that a Sikh is a Sikh only if he follows the basic Sikh tenets, thus living the lifestyle of a Sikh.  They challenged all people to live their beliefs, not talk their beliefs.

Identity is established through action.  That is the message of all Gurus and, further, it is the message of all the saints and sages who have lived on this planet throughout time.  Either you fly like an eagle, or you crawl like a snake.  You speak the Truth or you lie, you are sensitive to the Infinite or you are not.  It’s your actions which tell you what you actually believe.

The Gurus gave their Sikhs an identity; that of Khalsa.  They gave a form and a practice to maintain that identity throughout any time; be it in the sixteenth century or the twentieth century; be it in the Punjab, India, or Ontario, Canada; be it in times of peace or times of war.

Why then is there such a preoccupation amongst some Sikhs today with establishing who is a Sikh and who isn’t a Sikh?  Because those people have stopped practicing the daily disciplines of their religion, and religious identity is a problem for people who want only to “believe” in their religion, not practice their religion.

Perhaps the greatest example of this preoccupation centers around the controversial figure of Siri Singh Sahib Harbhajan Singh Khalsa Yogiji.  In ten years, he gave hundreds of thousands of belief-ridden refugees of other religions and purposeless philosophies an opportunity to practice the basic lifestyle of a Gursikh.  He challenged the youth of America to earn by the sweat of their brow instead of relying on the welfare state.  He taught them to replace cynicism and defeatist chatter by chanting Sat Nam.

He showed them how to create communities where people live for each other instead of at each other.  He taught people the significance of keeping their hair and wrapping their heads with the crown-like turban, thus giving them back their lion-like dignity.

He challenged them to rise before the Sun rises, in order to chant God’s Name.  He gave to women the vision of Aadee Shaktee, and a revalued appreciation of modesty and grace.  He taught people to repair their bodies through physical exercise and discipline, into a state of health and strength.  He gave them names to remind them of a destiny that was theirs, if they but lived to the power held within that name.  He introduced them to Dharma and led them to the feet of the Siri Guru Granth Sahib.  He did all this as no other Sikh has ever done in the West…. And yet it’s still the favorite past-time of many Indian Sikhs to wonder whether or not even he is a true Sikh!

As long as Sikhs refuse to practice daily the lifestyle set down by the ten Gurus, there will always be ignorance in-fighting, slandering and lack of cooperation and communication among Sikhs as well as between Sikhs and non-Sikhs.  Politics will continue to take precedence over prayer, because people forget how to pray, or else become so comfortable with material possessions that prayer becomes redundant.

It is only through daily saadhanaa, doing paath, living together as a community, refraining from alcohol and drugs, singing Gurbaaanee Keertan, chanting God’s Name and living in God-given form, that a Sikh becomes a Sikh.  To discuss beyond this, who’s a Sikh and who’s not a Sikh is meaningless.

The tragedy in the current Sikh argument about identity is that it keeps Sikhs away from understanding the nature of the times that we live in right now.  The current time demands leaders, people who know who they are.  It demands a people who can work together as

One body for the good of all humanity.  It demands a vision of the future so that solutions to existing problems can be clearly seen and the problems resolved.

Sikhs have an appointment with the Maker of history.  As Sikhs we’re being called upon now to comprehend the power, the resources, and the potential that we possess as a Dharma; for our religion is a recipe to take people from belief to action, from confusion to order, from hopelessness to hope, from separation to unity.  What we have been given as Sikhs is a technology of consciousness that culminates in the Siri Guru Granth Sahib itself.  This technology is applicable to all people, at all times, in all situations.   It is truly a universal religion.  It is not an “ism” but a formula for righteous living that the world is literally dying to possess.

We are the bearers of this technology and it’s our responsibility to bring it to those people of the world who have little hope without it.  But we cannot preach it, we cannot pretend it.  We must live it!