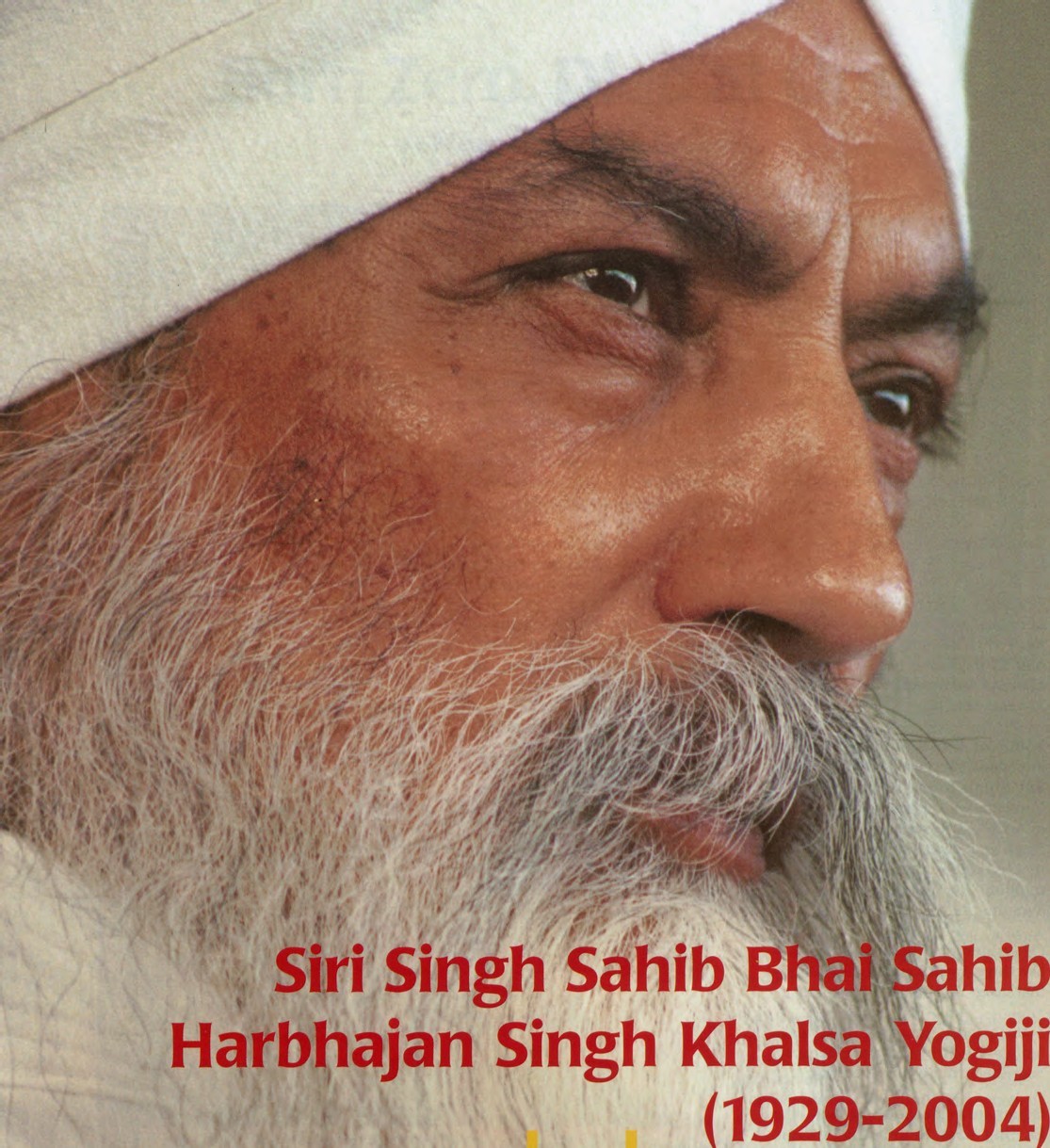 Harbhajan Singh Khalsa Yogiji, known as Yogi Bhajan to hundreds of thousands of adherents worldwide, left his physical body at 9:05 p.m. MDT on October 6th. His passing took place at his home in Espanola, New Mexico surrounded by family and friends. The cause of death was complications due to heart failure. He was 75 years old.

An outstanding pioneer in many fields with a deep and compassionate insight into the human condition, he established permanent institutions, created spectacular events, and produced a prolific body of teachings.

The first to publicly teach Kundalini Yoga, when he arrived in the West In 1968, he announced he had come to the West “to create teachers, not to gain students.

A deeply devoted Sikh, his inspiration and example motivated thousands to embrace the Sikh way of life. Through his personal efforts, Sikh Dharma was legally incorporated and officially recognized as a religion in the USA in 1971. In 1971, in acknowledgement of  his extraordinary impact of spreading the universal message of Sikhism, the president of the SGPC (governing body of Sikh Temples in India) Sant Charan Singh, gave him the title Siri Singh Sahib, Chief Religious and Administrative Authority for the Western Hemisphere. The Siri Singh Sahib was given the responsibility to create a Sikh Ministry in the West by the Akal Takhat, the Sikh seat of religious authority in Amritsar, India. He was honored with the title Bhai Sahib by the Akal Takhat in 1974.

Born Harbhajan Singh Puri, August 26, 1929, in the part of India that became Pakistan in 1948, he was the son of a medical doctor.

When he was just eight years old he began his yogic training with an enlightened teacher, Sant Hazara Singh, who proclaimed him to be a Master of Kundalini Yoga when he was sixteen and a half.

During the turmoil of partition in 1947, at the age of 18, the Siri Singh Sahib led his village of 7000 people, near what is Lahore, Pakistan today, 325 miles on foot to safety in New Delhi, India, where he arrived with only the clothes on his back. He continued his education at Punjab University where he excelled in debate and was a star athlete, playing both hockey and soccer.

After graduating with a degree in Economics, he began Indian government service with India’s Internal Revenue Department. Shortly thereafter he moved to the Customs Service and became head of Customs at Palam International Airport (now known as New Delhi’s Indira Gandhi Airport).

He married lnderjit Kaur in 1952. They had two sons, Ranbir Singh and Kulbir Singh, and a daughter, Kamaljit Kaur.

In September of 1968, he left India for Canada to teach yoga at Toronto University, carrying a letter of recommendation from Sir James George, Canadian High Commissioner in New Delhi, who  had been his student. After two months in Canada, he flew to Los Angeles for a weekend visit. Arriving in Los Angeles virtually unknown, Yogi Bhajan met a number of young hippies, the spiritual seekers of that era, and immediately recognized that the experience of higher consciousness they were attempting to find through drugs could be achieved by practicing Kundalini Yoga, while simultaneously rebuilding their nervous systems.

From humble beginnings, teaching first at the East West Cultural Center and then in a student’s furniture store in West Hollywood, “The Yogi” was like a magnet. Students flocked to his classes. Soon he was teaching at colleges and universities, including Claremont and UCLA, and accepting invitations to teach in other cities.

In July of 1969 the non-profit 3HO Foundation (Healthy, Happy, Holy Organization) was incorporated  in California. Under his guidance as Director of Spiritual Education, 3HO mushroomed worldwide, to 300 centers in 35 countries. In 1994 3HO became a member of the United Nations as an NGO  (Non-Governmental Organization).

“It’s not the life that matters,
It’s the courage that you bring to It .”

“Don’t love me, love my teachings.
Become ten times greater than me.”

Inspired and motivated by his words and adhering to the practices he taught, students created music, art, and poetry reflecting the universal wisdom he shared. Over 200 books have been written based on his teachings, as well as a wealth of CD’s, videos, paintings, and sculpture. He himself wrote over 30 books including The Teachings of Yogi Bhajan , Furmaan Khalsa, Masters Touch, and Mind and Its 81 Facets.

Becoming the Mahan Tantric (only living Master of  White Tantric Yoga) in 1971, he conducted workshops in  cities around the world. In 1987 he transferred these workshops to videotape, calling them Renew to be New Courses, which will continue to be held worldwide.

In 1973, Yogi Bhajan founded 3HO SuperHealth, a remarkably successful drugless drug rehabilitation program, blending the proven ancient yogic wisdom of the East with the modern technology of the West. SuperHealth was accredited by the Joint Commission on Accreditation of Health-care Organizations and received its highest commendation. In 1973 it distinguished itself as being in the top 10% of all treatment programs throughout the U.S.

An ardent advocate of world peace and religious unity, the Siri Singh Sahib met with world leaders of all faiths to encourage dialogue, including Pope Paul VI, Pope John Paul II, the Dalai Lama, and two Archbishops of Canterbury. In 1995 he received the Courage of Conscience Award from the Peace Abbey in Sherborn, Massachusetts.

In June of 1985 he established the first International Peace Prayer Day Celebration in New Mexico. This annual day of musical celebration and interfaith prayer draws several thousand participants, including prominent national and international leaders in the realms of religion, politics, and the humanities.

A savvy entrepreneur, he encouraged his students to start  their own businesses. One of the first, Yogi Tea, brought his famous recipe into the mainstream, and it is now one of the leading tea companies in the health food market in the USA and Europe.

Yogi Bhajan earned his Ph.D. with his dissertation titled “Communication: Liberation or Condemnation.”

He is survived by his wife, children, five grandchildren and all those in his 3HO and Sikh Dharma families. 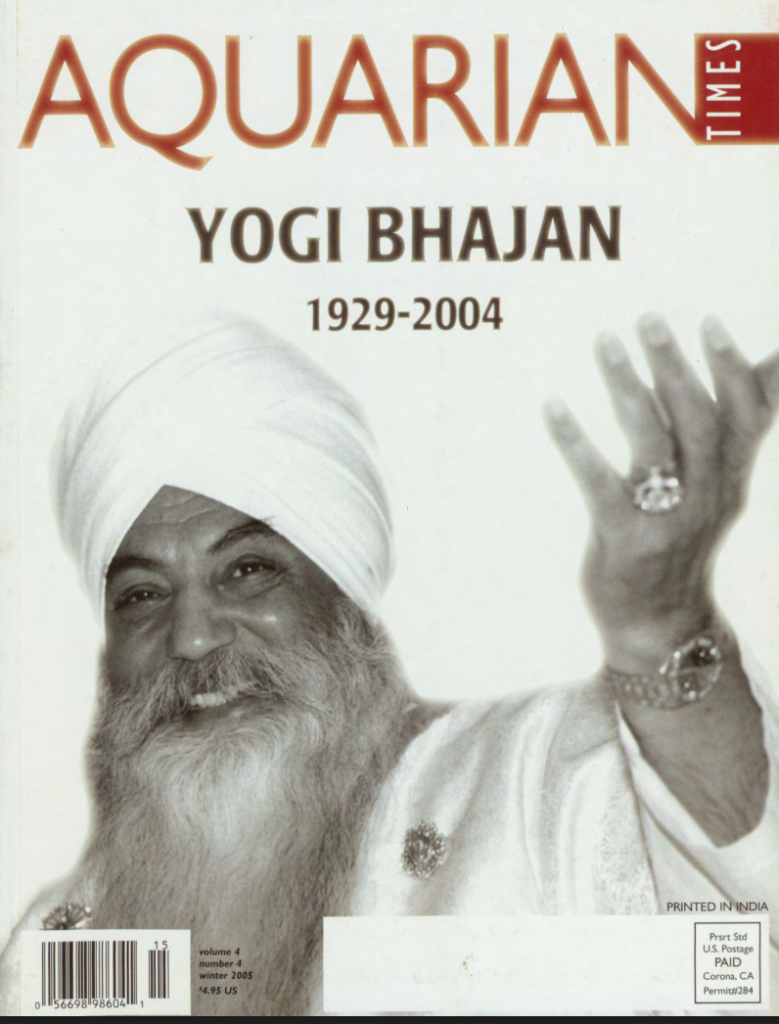 This article is as published in the winter 2005 Aquarian Times.  It was originally published via Sikhnet.