Stories of Yogi Bhajan in Toronto from the Fall of 1968 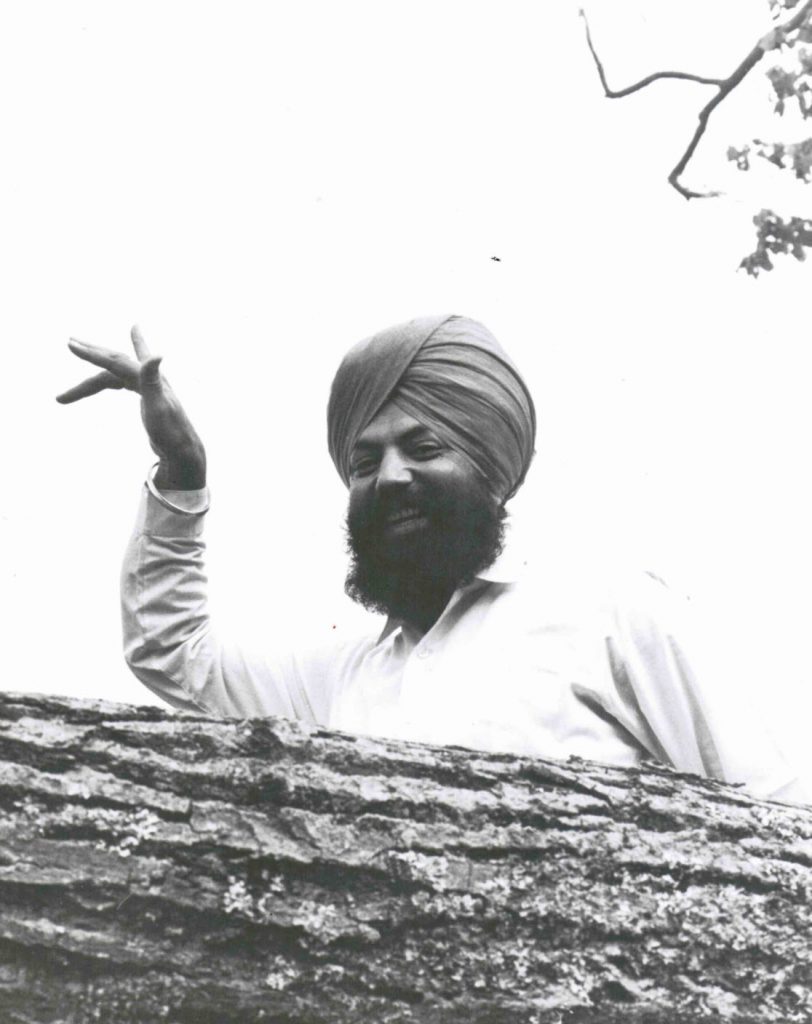 Ron describes where this photo was taken: a tree had fallen across Duffin’s Creek in Pickering, Ontario (near Toronto). Yogi Bhajan was putting on a show for us demonstrating one-legged poses on the log over the water.

In 1968, Yogi Bhajan landed in Toronto and set foot upon western soil for the very first time!  He came to Canada at the invitation of a professor at the University of Toronto to come and teach yoga. As destiny would have it, the professor was killed in a car accident on the way to the airport and there was no one there to receive him. To compound the situation, both of his suitcases were lost in transit and so he arrived with only the thin, silk kurta that he wore.   It was Friday, the 13th of September – a bumpy beginning of an amazing adventure.

Ron Baird was a professor at the University of Toronto School of Architecture and he met Yogi Bhajan shortly after he arrived in the west.

Written by Ron Baird September 13, 2003, here are stories of his first experiences with Yogi Bhajan in Toronto in the Fall of 1968

“It has been over 30 years since I spent time with Yogi Bhajan, although I often smile and think of him when I read those little homilies on my tea bag in the morning. I used to teach at the U of T School of Architecture back in the sixties and at the beginning of each school year all the students were required to attend a 10-day course in drawing held at the Forest Ranger’s School in Dorset, Ontario.

A skinny red-haired freshman answered a knock on the door of his room and was astonished when his unexpected visitor introduced himself as Yogi Bhajan from India. The freshman’s father was attached to the Canadian High Commission in New Delhi where he had crossed paths with Yogi Bhajan who mentioned that he was planning a trip to Toronto. The father said that his son was attending university there and Yogi Bhajan might look him up, and so he did. The freshman said he was delighted, however he was just preparing to leave for the north to register for his course and was already late. “Wonderful!” exclaimed Yogi Bhajan, “I’ll go with you and you can show me your country.” “I’m afraid I have only a little motor scooter,” apologized the boy. “No problem,” said Yogi Bhajan, “In India we travel by motor scooter too.” They left in a cloud of blue smoke, dragging the muffler over every hump in the road.

That evening, the freshman came to my room and explained that he was late because of the unanticipated difficulty in getting his scooter up the hills and, by the way, he had brought someone with him and didn’t have any idea what to do next. I took a look around the corner at our uninvited guest and saw a very exotic creature indeed. Bright blue turban, jet-black beard, long silk shirt and sandals … no luggage and an unnerving way of looking directly at you when he spoke. I returned to the room where Professor John Hall was explaining the impossibility of the university accepting this yogi, as he was not a student. Since we couldn’t very well turn him out in the woods, we declared that he was a guest lecturer who could stay until the first available ride back to Toronto presented itself.

The next day, students gathered in the auditorium for the evening program to find Yogi Bhajan by the podium, sitting in lotus on a table, covered with a blue cloth that matched his turban. When the room quieted he began his talk. He said that the problem with westerners is that they don’t know how to relax. In fact, some couldn’t even sleep and sleep was essential to the rejuvenation of our bodies. If we studied yoga, we would gain the ability to sleep anytime, anywhere we wished. The proper position for sleeping is on the right side with the head resting on the arm and the legs bent. He demonstrated this posture and closed his eyes. We waited. A minute went by, then another. Students began looking at each other with quizzical expressions, raising eyebrows and shrugging shoulders. Another long minute dragged by and still he didn’t move. We waited quietly for five minutes and suddenly he sat back up. “That is how it is done,” he said, and walked off the stage.

I invited him to Thanksgiving dinner at my house that fall.  Yogi Bhajan arrived right on time. He brought with him six people, whom he had assured would be welcomed to the feast. It had never occurred to me that he was a vegetarian. I assumed that vegetarians were all pale and wane and totally without energy and he certainly didn’t fit my model.

We carved pumpkins together that Halloween and he did very well for his first time, except that his Jack-O-Lantern had three eyes. We set them one on each step of the staircase in my little house and turned out the lights. Magical.  He asked me what was the best way to advertise his mission to bring Yoga to America, and I said, “Probably television.” The very next day he phoned to tell me to watch the Elwood Glover Show, because he was going to be the next guest. 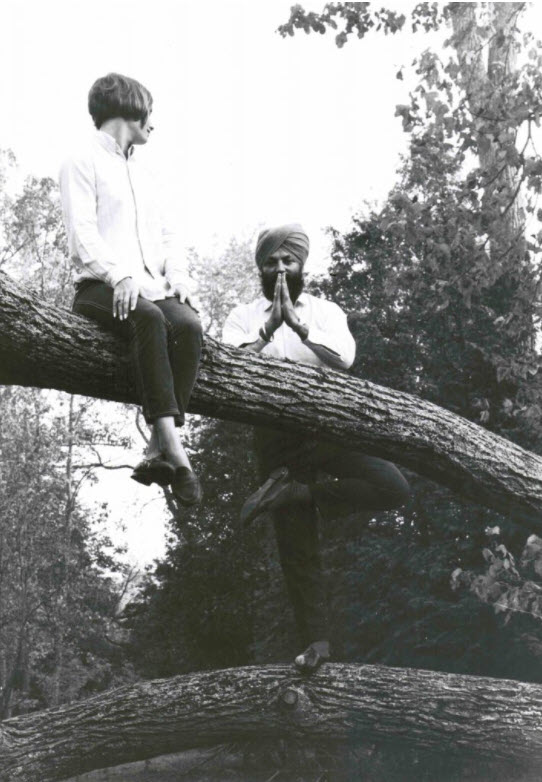 Ron’s description of this photo: the woman sitting on the tree branch was one of the students he had brought with him to my place for Thanksgiving or Halloween.

He used to call me on the phone at 5 a.m., kirtan blasting from his ghetto box in the background.  Mr. Ron was what he called me.  I used to drive him around sometimes and he explained that he knew how to drive but didn’t like to.

I warned him that he needed to buy some warmer clothes, a coat, winter boots, gloves etc.  He dismissed my concerns with a wave of his hand.  Cold was not difficult for him, he could raise his body temperature at will.  At one point in his training there was a test.  He had to sleep under a stack of frozen blankets…breath of fire.

“I’ve thought of a good American name for my mission,” he announced to me one day. “It’s 3HO, what do you think?” I said, “It sounds like the symbol for decaying tritium or a laughing club or something. What does it mean?” “It stands for the Happy, Healthy, Holy Organization.” I cracked up. “What’s wrong with it?” he inquired. “It’s just silly. It’s a ridiculous name; it will never catch on. You must think of something else,” I declared. “I can’t,” he replied. “I’ve already paid for the business cards.” …”

We had some good times together, lots of laughs, he had a huge presence where ever we went.