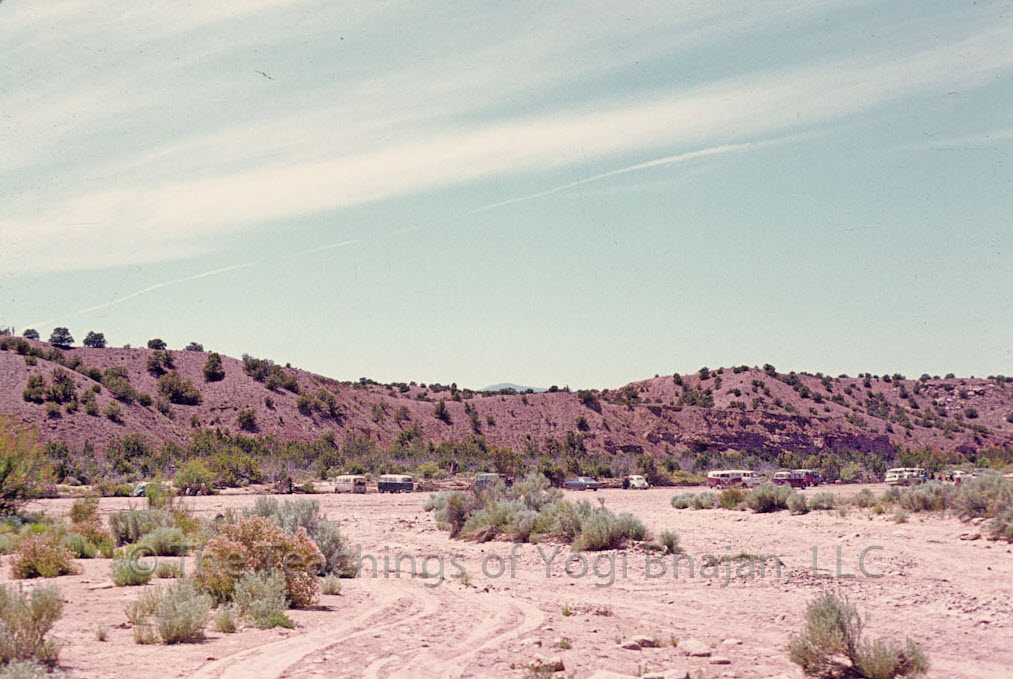 Santa Clara Canyon in the Jemez Mountains of northern New Mexico was one of the most beautiful places on the planet. Mt. Chicoma, graced by late season patches of snow, dominated the peaceful valley. Santa Clara Creek meandered through stands of tall spruce and fir and meadows of green grass and wildflowers. The valley was part of a single huge volcanic caldera encompassing the entire mountain range. It was sacred to Pueblo Indians and had been to their ancestors for millennia. 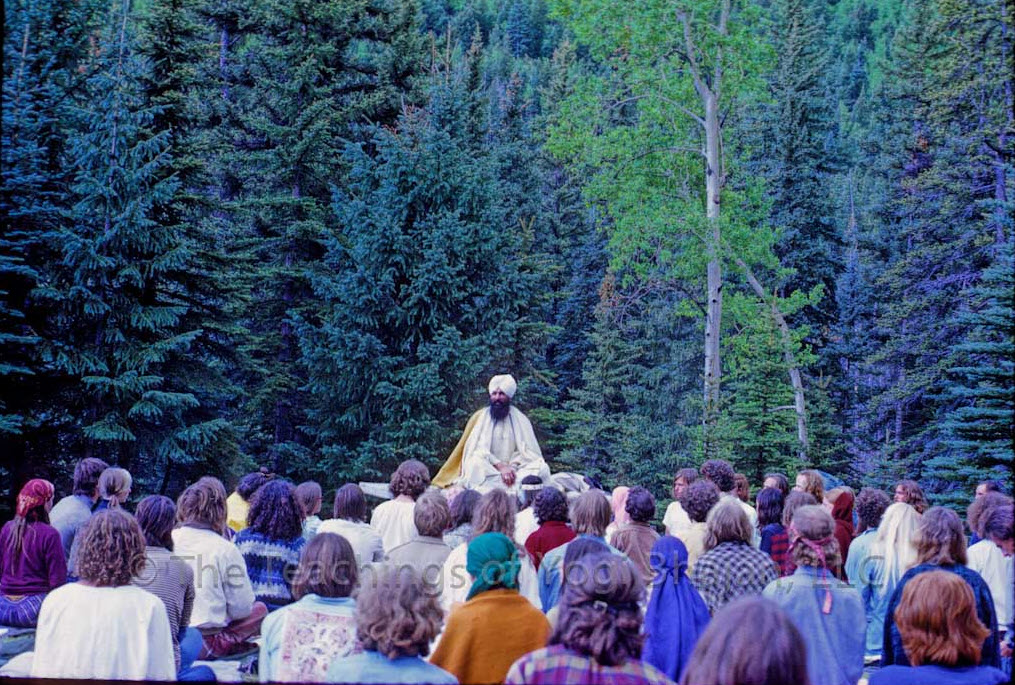 Yogi Bhajan invited his students from all over the country to travel to this sacred site and join the Summer Solstice Sadhana. The solar energy was at it peak and spiritual communities since time immemorial gathered at this auspicious time to celebrate life and our common spirit. Three hundred or so yogi / hippies arrived in caravans of cars and buses, erected tents, tipis, and other shelters throughout the beautiful mountain meadow and joined for meditation, chanting, yoga, and the simple joy of just being together.
One afternoon a mountain rainstorm sent everybody scurrying for shelter. As soon as the rain stopped, I emerged from my tent to take in fresh scented air. The valley was utterly enchanting; a mystical fog hugged the ground and the rainclouds still hid the peaks. I walked down the wide and completely empty meadow in a state of wonder. Suddenly, a hundred yards in front of me, emerging from the fog was the solitary figure of YogiJi, walking up the valley right towards me. There were distant voices at the edges of the meadow as people emerged from their shelters. But for the next couple of minutes, it was just YogiJi and me in the middle of this glorious valley. In silence we walked towards each other in seemingly slow motion while the mountain peaks emerged from the clouds and the cool scented air filling our lungs. 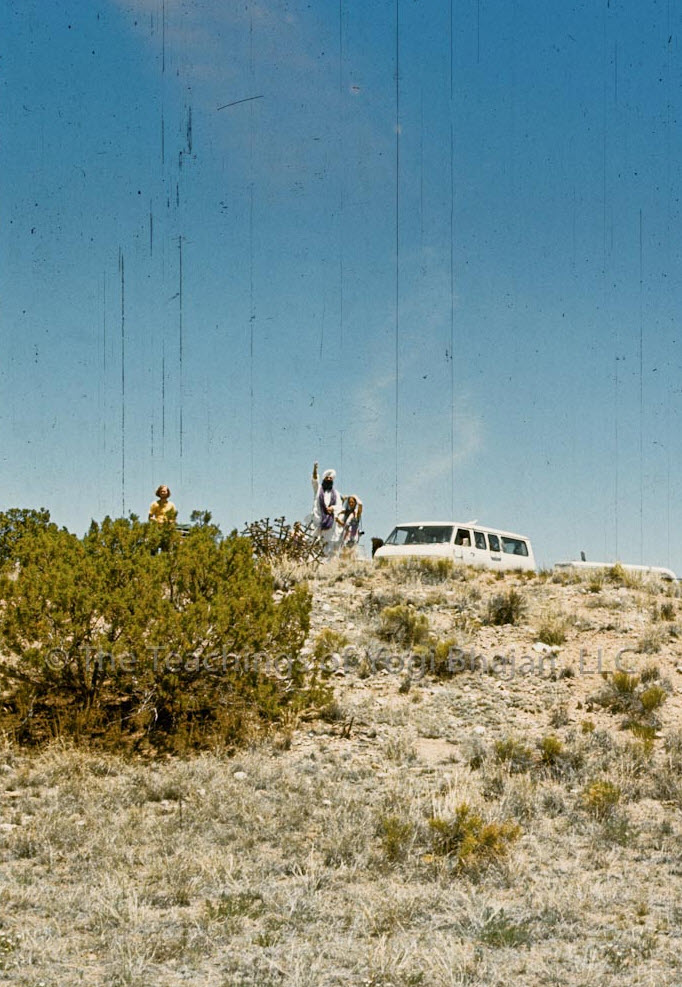 So, we meet, I thought to myself. He was the master yogi and I the aspiring student. As our paths drew us closer, I pondered the words I would use to greet him. More importantly, I looked forward with great anticipation to the words of wisdom the Yogi would share with me.
In those days I identified with the great Tibetan yogi Milarepa, who had lived many years in the mountains meditating. Like Milarepa, I used to escape to the mountains every chance I had. I fantasized myself renouncing the world, living in a cave, meditating all day long and living in the bliss.
The fateful day when Milarepa met his guru changed his life. Upon recognizing his guru, Milarepa fell at his feet and prayed for his blessing. The guru touched him, the great illusionary curtain of Maya lifted, and he glimpsed the clear light of reality.  I wondered if my impending meeting with YogiJi might have a similar effect.
As YogiJi approached, I contemplated throwing myself at his feet. Could I really do that? Then I reconsidered. Maybe I should just touch his feet. Don’t disciples often touch the feet of their teachers? However, at that time it was not common practice among YogiJi’s students. Anyway, it did seem a bit extreme. Maybe I should just bow. By this time, he was getting close. I had no idea what to do. He was almost upon me and I was growing more and more frazzled. Should I say something? As it was, I just stood there with my palms together and my eyes wide. I was so petrified I couldn’t even say Sat Nam.
YogiJi walked forward like a majestic king. His huge white turban was his crown. The shawl draped over his shoulders was his royal robe. He seemed entranced by the splendor of the mountain valley and could care less about the crazy kid in his path going through mind trips and freaking out.
He walked towards me without even the slightest acknowledgement of my presence, his eyes focused on some distant mountaintop. Was he going to walk right past me without even a nod, no greeting at all, not even a simple Sat Nam, like I didn’t exist? That certainly was what it appeared, and I couldn’t believe it. Was I really such a complete nobody that he would not even say hello?
Truthfully, I was looking for his recognition of me. I had it all backwards. I wanted him, the master, to acknowledge me, not the other way around. As usual, I was stuck in my ego and had no understanding of who he was. I stood there actually holding out the possibility that he would acknowledge my highly evolved spiritual state and enlighten me with his magic touch. Yes, I was in spiritual fantasy land.
He walked right past me, head high and eyes on the distant peaks. I was crushed. But suddenly he turned and fixed me with those unbelievably powerful eyes. He bugged them out so wide I thought they might pop right out of his head. Then he stuck out his tongue. For a brief flash, he looked like a complete crazy man. That was it, nothing more, no words, no enlightenment, just the huge eyes and the tongue. Then he was gone.
There I was standing in the middle of this beautiful meadow, futilely trying to make sense of what had happened. Did he just stick out his tongue at me? Yes, he really did. My mind was in a whirl. Did he just make a funny face? Yes, he did. I stood there with the image of his bugged-out eyes dancing in my mind. It was too much. Suddenly I started laughing. I laughed until the tears flowed.
What did it mean? Why did he do it?  Milarepa’s guru never stuck his tongue out at him, at least not in his autobiography.  How was I to interpret it? Did this action have some deep significance? Maybe he did enlighten me, and I just didn’t know it.
I had read that the spiritual teacher is a mirror, reflecting our consciousness and our potential. If YogiJi was reflecting to me my consciousness, what does that make me?  I walked on in a daze, my mind churning. Okay, YogiJi was teaching me, even with the tongue. What did I learn?
Milarepa sometimes used “crazy wisdom”. His job as a great teacher was to break his students out of ego and limited consciousness. Sometimes he used a big surprise, breaking the rules, humor, anger, outrageous conduct and the utterly unexpected. Maybe the protruding tongue was YogiJi’s version of crazy wisdom. It was probably the Yogi’s only way to penetrate through my layers of insecurity and fear.  My mind whirled faster and faster until it just short circuited. I was left with a deep sense of peace. He did reach out to me. And it may sound crazy, but I felt he really cared. I walked away with the master’s presence in my heart, a tear in my eye, and a smile on my face.
Kirpal Singh Khalsa, Ph.D.