Home › Experiences › Our Stories › The Art of Marriage 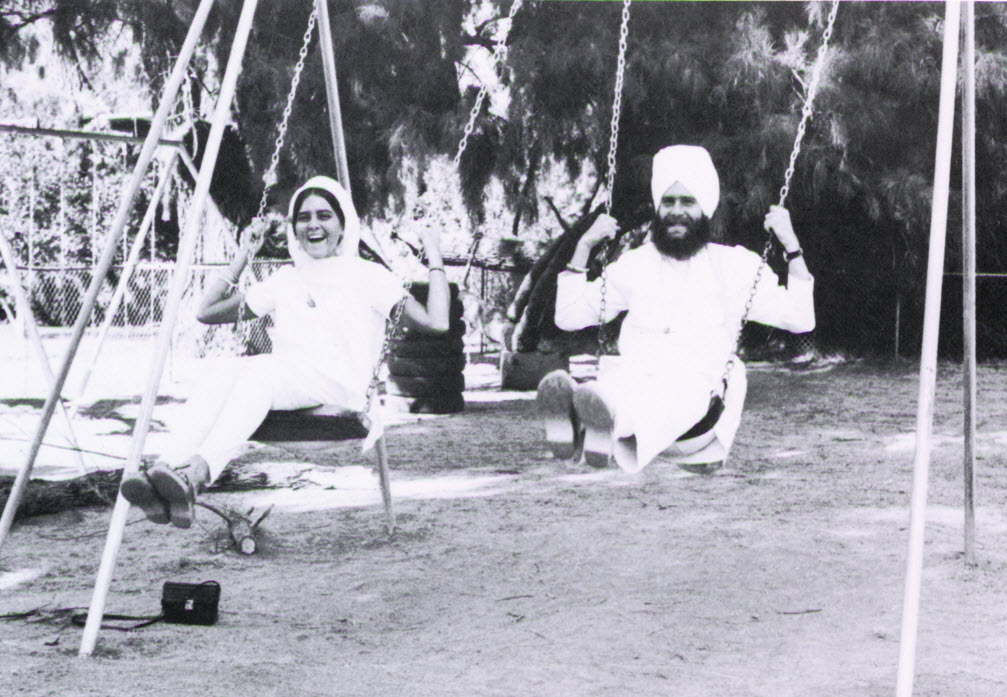 “Marriage is an institution in which two individuals of opposite polarity decide to build a cozy environment which is called home, and through thick and thin of time, they adjust their behavior.  Without adjusting their behavior, no marriage is possible.”  ~Siri Singh Sahib, Yogi Bhajan, 1976

“Marriage is a carriage of happiness through the test of time.”

“Marriage is an institution which depends upon honoring the Word.”

What human endeavor requires a team of two artful and skilled diplomats engaged in a single activity; so powerful that it needs to be legally licensed; so difficult that it takes an entire lifetime; so compelling that almost every adult in the history of humanity has tried it at least once; and so satisfying that, if successfully carried out, it produces complete fulfillment on every level of consciousness for the individuals involved?

If you answered “marriage,” you’re right.  The above description might baffle thousands because since history began, marriage for many has tended to be a game played in three stages: lustily until the lust ran out, bitterly, until the bitterness ran out, and tiredly until life ran out.

When Siri Sigh Sahib Bhai Sahib, Harbhajan Singh Khalsa Yogi ji first came to the United States, marriage as an institution our society was on shaky ground.  Misunderstood, abused and abandoned, marriages were breaking up nearly at the rate of one out of two.  Separation, divorce and second, third and fourth marriages were the common experiences of too many individuals.

By the sixties, the situation had grown so bad that young people, by and large, began to disdain and ignore marriage and adopted a “wait and see” attitude:  “move in with me and we’ll see what happens.”  Not surprising, few relationships lasted.

“Marriage is a carriage of happiness through the test of time.” ~Siri Singh Sahib, Yogi Bhajan

People began to see marriage as a fool’s game, and not without good reason. After all, increasing numbers of people came from broken homes.  Feelings of having been abandoned by one or both parents had left scars of cynicism. Yet the old hope still lingered, the big question mark, could there be, just possibly be, one person who could love me as I am, take me as I am, make me better and never leave me?

Poetry and popular songs have always had, as their predominant theme, the love between a man and a woman.  Increasingly, advertisers have used sex as a major human motivator.

Freud saw it as the major factor influencing every cause and effect in the life of the individual.  When the Siri Singh Sahib began teaching in the United States, people flocked to him to learn Kundalini Yoga, to listen to and practice his teachings, to experience an alternative to the common lifestyle of the time.  And in almost every case, one of the factors which inspired an individual to seek the company of a spiritual leader was a catastrophic inability to find fulfillment in relationships with the opposite sex.

What made the Siri Singh Sahib so tremendously attractive as a teacher was his own strength and self-assurance and the fact that he, more than anyone we had ever encountered, has the ability to live and, perhaps more importantly to us, to project and transmit, the things he talked about.  There before us was something most of us had never encountered before: a complete and fulfilled being.  What a tremendous joy to know that such a thing could exist.

In contrast to the aging movie-star who said, “I know about marriage, darling, I’ve done it four times.  The Siri Singh Sahib said, “If you want to know woman, know one woman.”  Life is not a used car lot,” he said, “where you can trade last year’s model in for this year’s.  If you jump from woman to woman or man to man, all you are doing is trading one set of thirty-nine problems for another set of thirty-nine problems, and no improvement is made.

And our own involvement is frozen and our own problems are unrelieved because no effort is made to do anything about them.  “If it feels good, do it,” is the current trend of advice, and when it no longer feels good, don’t do it.  Some people also say, “When it begins to get real, get out of it,” and therein lies the problem.  As long as people can live in fantasies within themselves and with each other, they do fine.

Once the patina of illusion rubs off, they begin to see the reality of their lives and are faced with having to grow.  At this point, they usually run away, as far as they can get.

“Marriage is an institution which depends upon honoring the Word” ~Siri Singh Sahib, Yogi Bhajan

Committed to the ideals that he teaches, and confident in their experiences of the teachings, people were married and began to live as husband and wife in the family of the Khalsa.  When they made this decision, they renounced the “option” of divorce.  They vowed to live and love together for the rest of their lives. As a mental discipline, neither could think of divorce, even in the most desperate or angry of moments.

Without that escape, that threat of possible alienation, each partner is faced with a make-of-the best-of-it situation.  The only option is to make it work, or be miserable.  The wife realizes that it’s to her benefit to please him and make his life happy and the husband realizes it’s to his benefit to please her.  As they see the other one making steps in their direction, they gain confidence and courage.

To list and catalog the Siri Singh Sahib’s teachings on marriage is not for this article.  They are available through other sources. The most important thing to note is that they work.  The proof lies in the happy faces and cozy vibrations in the homes of Khalsa families across the Americas and Europe.  The strength of a community is based upon the strength of its families.  Khalsa families are invincible: Khalsa communities are unshakeable.

‘But even more proof lies in the smaller faces and eyes that peak around corners shyly and then brighten with recognition.  The intelligent, spiritual and delightful children that bound around every ashram are the brings who will stand as testimony to the true worth of a Khalsa marriage.  A few minutes in the company of these little ones leaves no doubt:  a Khalsa marriage is worth a great deal.

And the worth of the man, who helped, and still helps so many find the strength and the will to honor their word, to pass through every trial and thus to find fulfillment within themselves, perhaps can be measured in the same way, and perhaps cannot be measured at all.

Home › Experiences › Our Stories › The Art of Marriage