Yogi Bhajan on stage at the Atlanta Pop Festival in 1970

This was written by M.S.S. Baba Singh Khalsa of Los Angeles, California and shared on page 108 of the book, “The Man Called the Siri Singh Sahib”, which was published in 1979.

At the Atlanta Pop Festival, in 1970, there were a few hundred thousand young people in attendance.  This event took place right on the heels of Woodstock.  One of the promoters for the festival was one of the Siri Singh Sahib’s students, and he invited the Siri Singh Sahib to participate.  The Siri Singh Sahib decided to hold a “Holy Man Jam”, so the people of the various “New Age” spiritual groups would have an opportunity to deliver their messages to the gathered throng.  Swami Chidananda, Hare Krishnas, Christians, Buddhists, American Indians, and about ten different leaders came on his invitation. 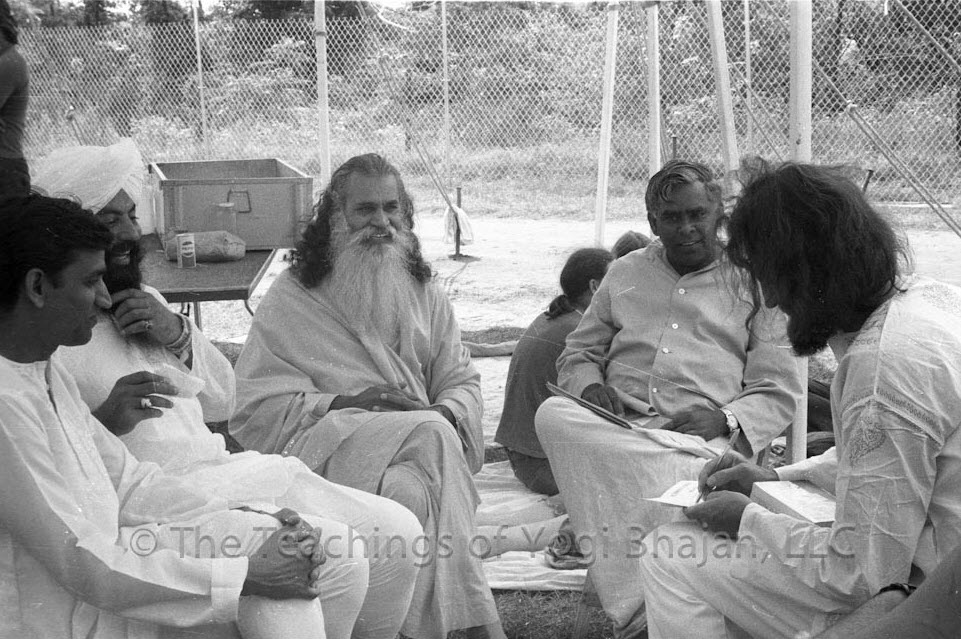 That Sunday, early in the morning, at about 10 o’clock, we looked out on the racetrack infield.  There must have been about 200,000 completely “stoned” human beings out there.  All of these swamis, yogis, Christians, etc. got up and each gave their message, their mantra, or their exercises.

Then, just before the music was to begin again, the Siri Singh Sahib had an opportunity to speak. It was really incredible. The essence of what he said was basically the same as what the other teachers had said, and he didn’t deliver it in a much more powerful voice or anything.  Yet, within a couple of minutes, all of those hundreds of thousands of people were standing on their feet, waving their arms and making “peace signs”, swaying back and forth chanting, “Peace, love, peace, love,” along with the Siri Singh Sahib.  Where there had been almost no reaction to the other eight or nine people, the Siri Singh Sahib suddenly had the crowd totally involved.

Back at the motel I said to him, “Sir, you’ve got to explain to me how you did what you did, when you basically said the same things in the same tone of voice as the others?  With your accent, you are even harder to understand than those other people, so how was it that you could accomplish what you accomplished?”

He answered “Sadhana. A person who does sadhana every day has a power that nobody can match”.

I, from that moment on, really understood the power of sadhana, for I had seen a living example of what it could do.