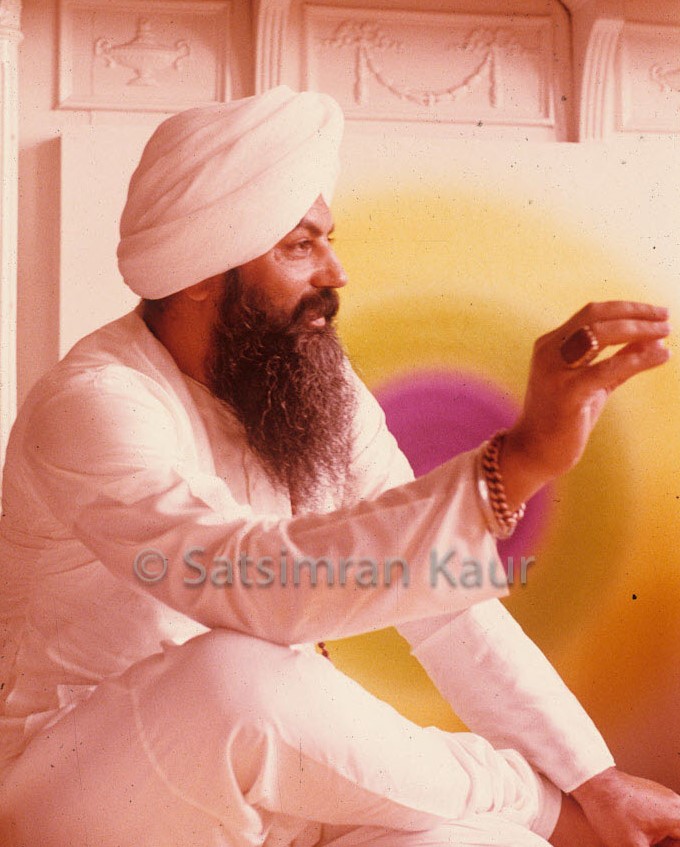 This lecture by Yogi Bhajan was first given in Spring of 1971 and was shared in the book, “The Man Called the Siri Singh Sahib“, which was published in 1979.

What is the matter?” That spiritual teacher they go to, whoever he may be, is going to tell them something which is a truth.  One teacher may be fast, another may be a little slow, someone else has his own method. But after all, every teacher has one aim and that aim is to give to everybody all the possible truths which he has attained.  In the 3HO way of life, it is very difficult to follow, because our approach is that everybody should get the light within himself and grow to perfection.

We are not here to promote a cult, or personality.  That is not our desire.  Our basic desire is to create teachers: those who can go out and spread the Truth, spread the Light.  When you have spread something, you can’t give away anything if you don’t have anything with you.  So, first, you have to fulfill yourself.  Only then will it be possible for you to go out.

I understand that everybody has to look to the spirit.  And everybody has to have the guidance of his own soul.  But first, he should know his soul!  Without knowing the soul, he has started to get guidance from the soul.  But it is not the voice of the soul, it is the voice of his ego, which he has mistaken as the voice of the soul.  And that is where we befool ourselves. Because the moment you start listening to the real voice of your soul, then that Soul is talking in me, and that Soul is talking in you, so how can there be a difference? How can we think there are two voices when there is only one Spirit in Everybody?

After all, what are we teaching?  We are only teaching to glorify the Infinite Truth within the person.  You can get the same experience with a powerful exercise.  You may get the same by sleeping.  It is your karma.  There is nothing special.  That is why to begin with we don’t initiate people.  Because we feel honestly, by initiation, you start belonging to a man first, only later, if possible, do you belong to Truth.  When initiated most people become fanatics.  Even without initiation, some like to say, “I am yogi Bhajan’s student.” But if you are not a student of Truth, then by just clinging to Yogi Bhajan, you are also drowning him along with you. 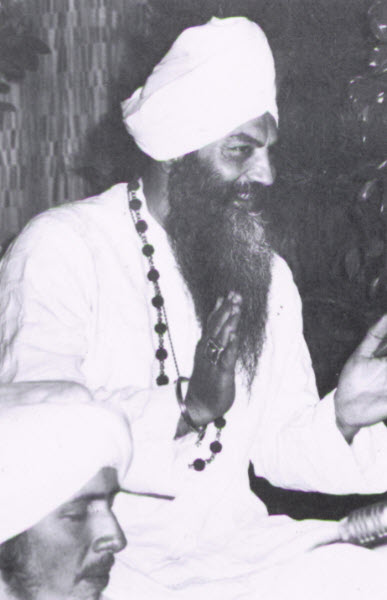 What is Yogi Bhajan? Have you ever analyzed that guy?  He is a person who brought to the United States of America a knowledge which already belonged to the people, and which he is corelating and telling to you.  The moment you feel you have learned it, then you are fulfilled and you are above that level of duality.  You are alright.  You become a teacher and go open an ashram.

If you don’t want to become a teacher, just forget it.  It doesn’t bother me.  You think I have inspired all these people who have gone and become teachers?  No.  Not at all.  I always say, that if you have faith in Sat Nam, go and start.  The Light of God will guide you and you will achieve what somebody has to achieve.  That’s all.

I have never said a word more to anyone.  The basic idea is, I am an instrument.  I am a humble instrument in inspiring people.  I don’t give up.  In your land, I have suffered the most.  Your egoism has put me through the worst time, and I have not given up.  Now I am accustomed to survive under all circumstances, and that is why I tell you that if I can survive, you can also survive.

Everybody has to clearly understand.  The inspiration may come from anywhere.  It may be a marharishi, it may be a rishi, it may be a yogi, it may be a guru, it may be a friend, it may be a mother.    But up to the time and point that you do not practice Truth in your life and eliminate the total untruth from your life, the light of God can never shine from you.  You may go and change teachers, ten, twenty, a hundred times.  How many teachers can you have?

Why is all this happening when you try to establish a discipline?  Because maya must have more, maya must push – you lift yourself up four, five, six steps and control yourself, withdraw yourself from all that maya, and there comes a guy who is your friend, and who is also your best enemy.  He has the dagger of ego in his hand and he stabs you right at the weakest point, and makes you fall flat on your face again.  Why?  Because he’s not on the path of Truth.  He does not want you to go on the path of Truth.

All pigs like to be pigs.  Take a pig, clean him up and leave him for a little while.  Tie him up with a chain.  Another pig will go into the mud and will come back and will rub that mud all around him.    Because pigs and dirt go together. Wherever he’ll find dirt, he’ll try to put his nose there.  That is a pig.

With a great effort, you control your own inner pig; you clean him out; you fix him close and bring him out.  But there comes another standard pig.  He is not under your control and you can’t do anything to him.  He looks at you and says: ’You belong to us’.  This guy who wears white clothes and comes from India might be a yogi, might not be a yogi.  Every day, he tells you: ‘Don’t eat this, don’t eat that, don’t do this, don’t do that.’  It is nothing but don’t, don’t, don’t.  Tonight, you forget him.  You do everything with your brothers.

We have slept together, we have lived together, we have played together, we speak the same language, we belong to the same country.  Let us do our same number.’ So, you are brought back to that standard again.  This is happening to us all the time.  I am just a reflection.  I am just communicating to you what happens to us.  If somebody has left dope, everybody who meets him will offer him a joint.  Forget it.  It has no reality.

Many times, you are tempted to buy something through the glitter of something else.  You buy unreality and illusion.  In India, there is a group of people who sell tea.  The tea people take a copper pot and put opium on the base, add water, boil it, and make tea.  They offer it to people.  And those people who take tea from that shop will love to take the same tea again.  The innocent people never know why that tea is so effective. When they drink tea with friends, they tell everybody to put in more tea leaves, add this, add that, but only that tea would produce that special taste.

If I were to teach yoga to you in the same way these people sell their tea, I would have given you some special private lessons and would have started a studio and would have worked person-to-person and that kind of stuff.  I would have charged you a lot of money.  But I don’t have time for that.  And I don’t want to give you lessons.  My intention is to be here with all friends and all enemies.  Everybody should be in a position to completely and openly learn the yoga of awareness as a science.  As a truth, they should quickly realize how they can levitate themselves with it, how they can bring up their unit consciousness into a higher consciousness, so they may not claim that there was not any other alternative available to them except the way they are.  That is why I am serving you only green tea, right from the tree.  Because my intention is that you may grow.  My intention is not that I may grow.  I am already grown.  I am a yogi.  I can be a yogi anywhere on the earth.  I don’t need an introduction. I want you all to be greater than me.  That is the point for which I am working very sincerely.

Under the circumstances, this whole life pattern of ours is based on things of which we are not aware.  And we do not meditate.  We don’t penetrate to see that Light in us.  We need to prove that we are right, so we want some proof.  And the best proof for you is your own life, your own light.  And that is the way you should all grow – with discipline, constancy, and experience of the inner Truth in meditation and actions. ~ Yogi Bhajan (Spring 1971)