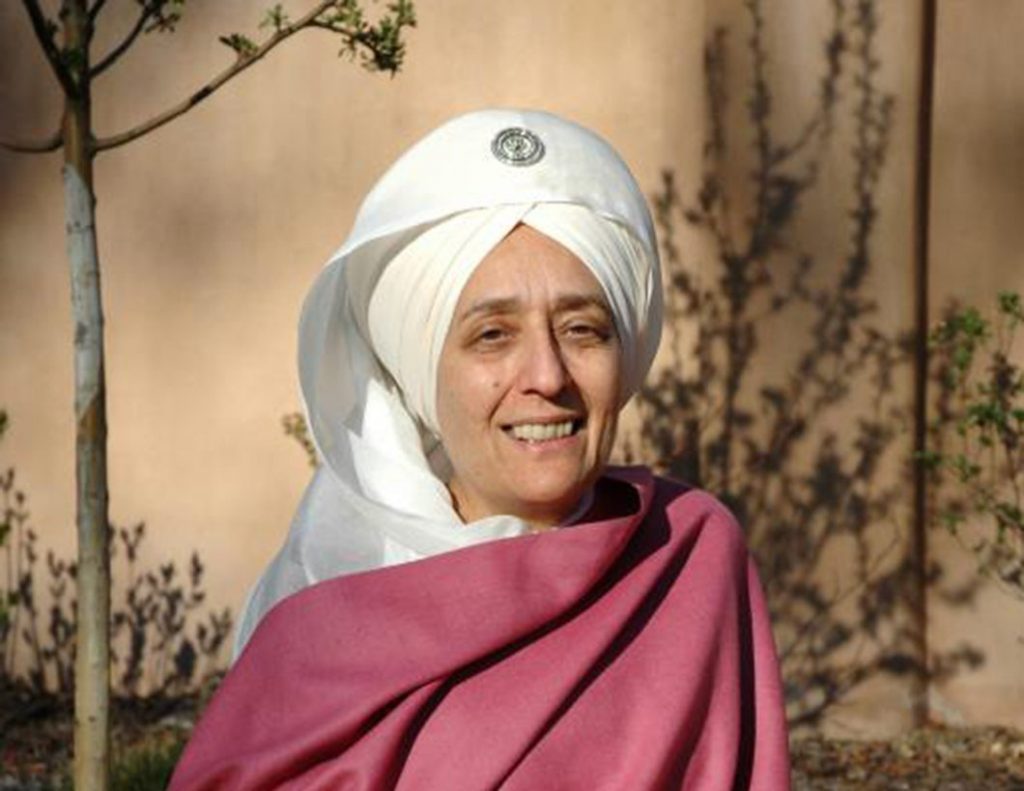 Today is my 58th birthday. Honestly, the numbers are getting scary.

I started writing this soon after the Siri Singh Sahib died. Finally, I have found the inspiration to complete and I am grateful for the opportunity to share this with everyone.

I remember very clearly the first time I saw the Siri Singh Sahib. His tratakam picture. I was 19, attending Brooklyn College sometime in early 1973. I remember walking into the student union building, turning a corner – and there was his picture on the bulletin board amongst all sorts of other photos, ads, notes to and from students. The photo scared me. I felt my heart jump and an almost audible gasp came out. I stared at it for awhile. Someone passed by and said “nice picture, huh?”  I said, “I don’t think I would describe this as actually ‘nice.’  Who is he?”  The student replied with his eyes at half-mast, “Hey, right-on, that’s my spiritual teacher, Yogi Bhajan!”

I started asking around campus. Yogiji lived in Los Angeles and taught Kundalini Yoga. That’s all I had to hear. At that moment, I made the (secret) decision to move to Los Angeles after graduation and find Yogi Bhajan. What the heck is Kundalini Yoga? One student said, “Oh, you should go to the ashram in Los Angeles and learn ‘the grace of God mantra’.”  He wrote it down for me: “grace of God mantra.”  The only word I really understood was ‘of’.  I carried that little piece of paper around for over a year.

I signed up for a Hatha Yoga class. The teacher was kind and sensitive. He taught us yoga postures (boring) and how to meditate (more boring). I asked him about Yogi Bhajan. He said “Yes, he teaches Kundalini Yoga. It’s dangerous.” That sealed the deal. I was very excited about my new and dangerous post-graduation plans. I knew that I wanted to meet Yogiji and find out what the big deal was.

I kept staring at the Siri Singh Sahib’s tratakam picture whenever I was in the student union building. Little did I know – I was actually meditating.

I continued Hatha Yoga classes and kept my plans to move to Los Angeles a secret as long as I could. It was fun. I felt like some comic book action hero about to obtain powerful and other-worldly abilities. It reminded me that as a child I had ambitions to be a spy – or if that didn’t work out, then a nightclub singer. (Note: I remember my parents being visibly upset about the ‘spy’ idea. Nightclub singer didn’t sound great to them either especially coming from an 8-year-old. But, in an effort to encourage the lesser of two evils, as they saw it, they bought me “Nightclub Barbie”.  I loved her!  She came with a black-sequined gown, long black gloves and a microphone).

My senior year at college came and went quickly. Graduation. Excitement and fear of the future. I announced my plans to move to Los Angeles, amongst loud and emotional protests from my family and friends. I left out the small detail about searching for Yogi Bhajan. I told everyone that I just had to get as far away from my hometown as possible. Something in me was screaming to escape. I felt that I would have no future unless I left my home. The departure date was August 26th, 1974. I had that date in my mind constantly – August 26th, August 26th, August 26th.  I found out later that I was chanting the Siri Singh Sahib’s birthdate.

I arrived in Los Angeles with $600 in my pocket and a backpack. I thought I had lots of money until I started looking for a place to live. I stayed with a friend (the only person I knew in Los Angeles) until I could find a job. She filled the house with smoke (both legal and illegal) and homemade granola. She knew Los Angeles well and helped me find the address of the ashram. I knew that my life was about to change in a big way.

The 2nd day after arrival, I took 3 buses to Preuss Road. I handed my little piece of paper to the sevadar.  He made a phone call and said, “There is a student here asking to learn the grace of God mantra.”  He told me to make myself comfortable and wait inside.

Wow. I had never been in any place like Guru Ram Das Ashram. So peaceful. And I think it was the cleanest place I’d ever seen. It smelled good. It was around 11am on a weekday and no one was in there. There were paintings of the 10 Gurus on the wood paneled walls. I didn’t know what I was looking at but I do remember the feeling that it all looked vaguely familiar. I was comfortable in this environment.

It seemed like I waited over an hour (my first experience with 3HO timing). Not a bad place to spend an hour or more – but I did start to wonder if they had forgotten about me.

In walks Siri Ved Kaur. Need I say more? As tall as me, wearing the brightest, blindingly whitest clothes I’d ever seen and a perfect turban (70’s style – tall and skinny). Gulp. I was speechless (highly unusual). Do all Kundalini Yogis look like royalty of the universe?

She taught me the Grace of God mantra and meditation and she told me to do it for 40 days. She said, “Yogiji says that if you do this meditation for 40 days, your aura will be tipped with gold and silver.” What’s an aura? Who cares – I knew with absolute certainty that what she told me was the truth.

I was so excited when I left. My heart pounded all through the 3 bus rides back to where I was living at the time. I started the meditation the very next morning (in the bathroom with the shower running, so my friend couldn’t see me or hear me.)  I did all 40 days (mostly in the bathroom). The grace of God mantra and meditation saved my life. I’m sure it has saved many lives. What a gift to the world from the Siri Singh Sahib.

The following evening I attended my first Kundalini Yoga class and a few days later, I met the Siri Singh Sahib in person. Subjects for another writing……!