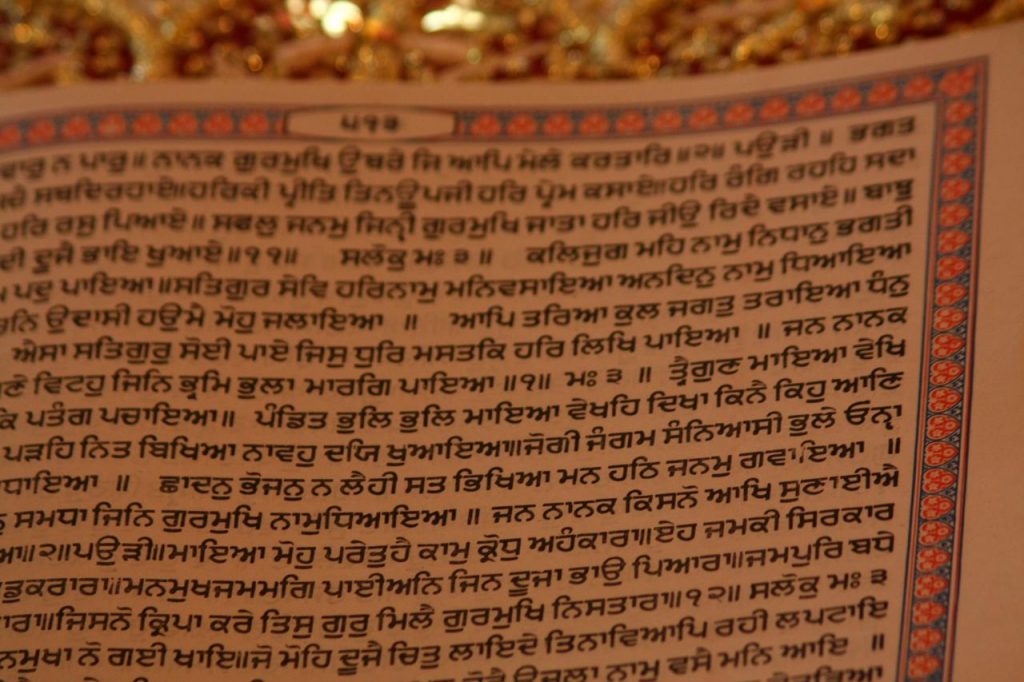 Excerpted and edited from transcripts of lectures of the Siri Singh Sahib Bhai Sahib Harbhajan Singh Khalsa Yogiji as shared by the SDI Ministry in 2011:

It takes you many incarnations to find a Guru. And sometimes as a human you may not even find a Guru, or you may find a Guru who is bogus. These are not worth anything. The blind will take you to the pitch of darkness and death. But look at the Sikh. He is conceived in the womb of the mother and the Siri Guru Granth is outside waiting for him. You cannot be a Sikh and be Nirgura (without a Guru). The Guru is given to you, and to your seed, and to your conception. Later on, you may accept it or not. But never will you be without the Guru. When someone asks, “Who is your Guru?”, you say, “Siri Guru Granth. Sat Naam.” He can’t question you. Because it’s the Word. It was the Word of those who were on Earth and there is no parallel to it.

That’s why they call it Siri Guru Granth. Gur=formula. Guru=the active formula. Siri Guru=the universality of the applied consciousness of that formula. So, just less than Wahe Guru is Siri Guru, and our Guru is called “Siri Guru Granth.” Granth means that the Guru is tied down. It is not a human being as a Guru, it is a Granth, a volume. All the Gurus are tied in to it. No escape. When you recite Japji, you become Guru Nanak, because Guru Nanak recited it. You want to find Guru Nanak? This is how Guru Nanak spoke, and this is how you speak. When you say, “Ek Ong Kaar, Sat Naam, Kartaa Purakh, Nirbhau, Nirvair, Akaal Moorat, Ajoonee, Saibhang, Gur Prasaad, Jaap: Aad Sach, Jugaad Sach, Hai Bhee Sach, Naanak Hosee Bhee Sach”, is Guru Nanak separate? Did Guru Nanak have two mouths and six tongues? Was he different from you? No, he was different only in what he spoke, and what he spoke we can speak too.

This is the first time on this planet Earth that the Word has presided over man, and man has bowed to the Word. There is no middleman. Vedas can be God, but not Guru. Bible can be holy scripture, but not Guru. Mahabharata can be the greatest philosophy, but not Guru. The only scriptures which attained Guruhood is the Siri Guru Granth. You will not find any scripture addressed on this planet as a Guru. We are Sikhs, and the seeker cannot live without Guru. The seeker is never without Guru, and Guru must be for the seeker. Oh, friend, without Guru there is no knowledge. Then find Guru. Where? You don’t know? We were fortunate. Nanak found the Guru for us. What Guru? The Guru, as he found it, was the Word. The Word was his Guru. He gave us the Word too. Amazing!

I am not forcing you to read Siri Guru Granth. Don’t misunderstand me. For all I care, you may not ever read it in your life. I don’t care. Don’t learn it for my sake. Learn it because there is no way out! The psyche surrounding this Earth has become so vast, and the territory of this Earth has become so little, that you require accurate rhythm, accurate scale and divinity. That’s why after every Shabad the word Nanak came as a seal, so that nobody could alter it. All other scriptures of the world were written after the great people had died, but this scripture was written within the lifetime of the Gurus. Guru Arjun was alive when he wrote the Adi Granth; he signed every page. If you go to Kartarpur in India, they can show you the first volume of the Siri Guru Granth that was written; it is on hand. Guru Arjun compiled the entire Granth but left some pages blank, and those pages were filled later on with the Bani of the other Gurus and saints.

The many words of Siri Guru Granth Sahib are like the leaves of a great tree. There are twenty millions and trillions of leaves on this tree, there are thousands of branches on the tree, but there is only one root. Therefore, you are given a Mool Mantra, the Root Mantra of all mantras: “Ek Ong Kaar, Sat Naam, Kartaa Purakh, Nirbhau, Nirvair, Akaal Moorat, Ajoonee, Saibhang, Gur Prasaad, Jaap: Aad Sach, Jugaad Sach, Hai Bhee Sach, Naanak Hosee Bhee Sach.” What Nanak has said in these few words is a great secret to know. Nanak has explained God. What is God? Ek Ong Kaar: there is One Creator who has created this creation. Sat Naam: Truth is His Identity. Kartaa Purakh: the Being who does. Nirbhau: Fearless. Nirvair: Revengeless. He is explaining the Universe. Akaal Moorat: beyond death. Ajoonee: it doesn’t come in birth or death. Saibhang: by itself. And Gur Prasaad: it is the gift of the Guru. How is that gift obtained? Here are the orders: Jaap. What’s Jaap? Perform this meditation. Aad Sach, Jugaad Sach, Hai Bhee Sach, Naanak Hosee Bhee Sach: True in the Beginning, True in the Primeval Age, True now, says Nanak, He shall certainly be True in the future.

That’s the secret, that’s the key. It’s a tragedy in the world. Somewhere there are locks but no key; somewhere there are keys, but no locks. And Guru Arjun knew about it. All he did was to put all the scriptures and mantras of the world along with the locks and keys in a serial order. You will find few Shabads in the Guru Granth Sahib where there is no Rahao. Whenever you say Rahao, that means the essence is being explained. Rahaao means, whatever I have said before, that is the key.

Guru Granth Sahib is written like a city of divinity: it has trees, it has house numbers, it has boulevards, it has freeways, it has staircases, it has doors, it has windows. Read it properly; you’ll find it is a whole city.

The entire Siri Guru Granth Sahib is written in Japa Sutras. When you put your mind into reading Siri Guru Granth, it stimulates the central nervous system we call shushmanaa. All that movement of your most subtle and sensitive part of the body, the tongue, is there to create positivity.

Once a girl asked me a question, “I am reading Siri Guru Granth, but very little is happening.” I laughed. I said, “What would have happened without it?” At some places you go, there is a lot of work, there is a lot of garbage. There are some places which are very clean. You can’t blame the broom! Some minds are very scattered; some minds are very one-pointed, and some wood is very wet. Try to start a fire with it, you put dry wood on it, blow air in it, put paper, do all these things. All that heat you create around it, when it dries, it burns up. Then you have a good fire, right? But sometimes you get very dry wood. Just put a little heat to it and it will start burning. Is something wrong with the fire? No. The wood is wet. Or the other analogy is: Some wood is wet. You make furniture with it. It bends, twists, curls, gets out of shape. Is something wrong in the way you make the furniture? No, the wood was wet. But if you take seasoned wood and make it, it will be steady. So, the mind has to learn that.

There are a lot of sutras in the Siri Guru Granth that can create miracles out of God energy. Miracles! And after that, if that has been the vibration in your existence, then your projection becomes the most powerful light of God Divinity, and that light will prevail through you.