Home › Experiences › Our Stories › The Most Divine Gesture: Sharing the Power of Prana 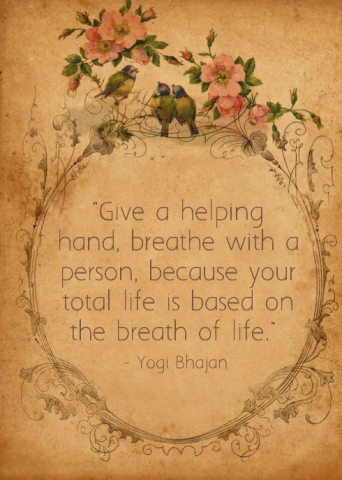 I took a chance and asked, “Can I hold your hand and take a few deep breaths with you?” He looked at me, paused, and then put his hand out, palm facing up.

I put my hand over his and we leaned back against the sofa, our heads resting back. We closed our eyes and began breathing deeply. I exaggerated my exhales so he could feel permission to exaggerate his. Each breath taken was a step down closer to tranquility. His bouncing leg, knee nervously bobbing up and down, began to settle. The tension in his body started to release itself. He shifted to lean back even more and an exhale delivered a weighted sigh.

I could sense his nervous system beginning to take a breather, to putter like a machine slowing down until it hums. My conscious breathing inspired his and we continued, like this, utilizing the power of prana to create a meaningful change for him that day.

My dear friend had been holding his breath for eleven years. I believe it was at his father’s deathbed, that his diaphragm locked up as he watched his only parent take his last breath. His grief bolted the gate shut to his vitality and spirit that day. Shortly after his father’s funeral, he began running his father’s business at a pace that could keep him at a distance from grief.

He maintained his bubbly persona, always showing up for others as the life of the party, despite barely being alive himself. He existed this way for all of his twenties, running. As we can understand now, his adrenals became overstressed, and his health began to fail. He developed debilitating anxiety that turned into full blown phobias. When I met him, he had been completely isolating himself and was beginning to gravely shut down.

For several months we talked about diet modifications, change of living locations, seeing a therapist or taking yoga classes. None of those ideas were shifting the energy for him. Then one day, as I was hugging my buddy goodbye, I noticed that his torso was solid like a rock from tension. I sensed there was very little prana in his body; the dimming light in his eyes could prove it. I thought to myself that if I ever got to see him again, if he’d let me in again, I’d ask him to breathe with me.

“Can I hold your hand and take a few deep breaths with you?” He did an amazing job of consciously bringing in each breath and exhaling completely. Each of his exhales that day felt like deep surrendering. Oxygen saturated his lungs and prana brought the flow of Life into his body.

In this state, relaxing into the sofa, nourished through breath, he began to unfold. He has told me since, that it was that day that his mind was freed from the chains of fear. He has come out of isolation, has made a drastic career change, and is doing the work he loves now. He has regained his relationship with his calling.

Through breathing together, he could see, for the first time in years, that he was okay. He felt relaxed. My eyes welled with happiness for my friend who was opening his eyes to find himself in a landscape of contentment. It was prana, restored, that brought life back to someone who was shutting down in grief.

It was a Yogi Bhajan quote that awakened me to the idea of asking my friend to breathe with me. He said,

“Best thing in your life, if you can ever do it, will be key to your happiness, prosperity and power, is to uplift others just with a smile. Don’t do anything, just with somebody who is very depressed.  Put a hand around the neck and say, ‘I am with you.’ Hold somebody’s hand and close your eyes and start meditating. Hug somebody and keep long deep breathing with the person. That little gesture is more divine and powerful than anything else you do on the planet. Give a helping hand. Breathe with a person, because your total life is based on the breath of life.”

Home › Experiences › Our Stories › The Most Divine Gesture: Sharing the Power of Prana