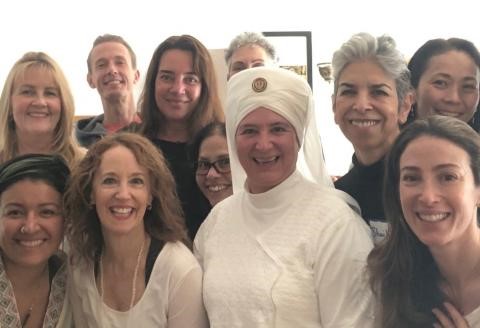 During a class on June 10, 1998, Yogi Bhajan asked Dr. Shanti Shanti Kaur to speak about her work with the immune system. This is the transcription of her talk.

In the early 1980s I was living in Los Angeles and teaching yoga and there were people who were coming who had illnesses that were not classified or categorized. Later we learned that these people were having opportunistic infections of AIDS and the tool that we had available at that time was Kundalini Yoga, that was it. No medical training, no anything fancy—something that we all have had for many years—basic things like, Sat as you inhale and Nam as you exhale, spinal flex, very basic fundamentals of Kundalini Yoga.

We offered these as tools to people to build their immune system. This was based on the belief that we have everything within us; we have our natural healing system. We just need to give it what we need. We need to access it through breath. We need to strengthen it through targeted movement of Kundalini Yoga, and integrate it through sound, mantra, the sound current. So that became our basis.

And over the years we got more training in the physiology of the immune system, the relationship between the mind and the body—the things that healed people for centuries that medical science was just discovering. What are the elements, what are their relationships, how does the glandular system and the nervous system work to make the immune response strong? The ancient theory about the glands being the guardians of the health—how does that work on a physiological level.? How is it that emotional states and mental states and thoughts and beliefs affect immune response? How can something as un-measureable as a thought have such an impact on the natural killer cells or macrophage activity?

So, we began to catalog and work with all of this and do case studies and every time a new situation arose, I would talk to the Siri Singh Sahib (Yogi Bhajan). “Sir, they found the virus in the brain. What do you do? What do you do if it doesn’t test positive in the blood stream, but it comes out with all symptoms?” And he gave me a variety of things that people can do to build their immune system in the most serious states of illness.

And along the way we realized that just teaching people information on how to keep themselves healthy is not enough to make change. Otherwise, everybody would have stopped smoking in the sixties when the Surgeon General said, “Don’t smoke.” So, we had to work with the what the Siri Singh Sahib described to me as the “mental mentality” of a person. He asked us to categorize and describe and treat the mental mentality of about six to eight different illnesses and we have been working with that over the years.

I got a master’s degree in Counseling Psychology and a Ph.D. in Health Psychology, specifically studying self-efficacy—the belief that what you do makes a difference; how meditation impacts that, and how it affects a person recovering from HIV. In 1990 I started working with people with cancer with Carl Simonton, who wrote a book called, “The Healing Journey.” He also wrote, “Getting Well Again.” He was a pioneer regarding the relationship between mind and body. He did a lot of work with beliefs and imagery and the role of stress on the immune system.

He pioneered this in the early 70s. He works not only with people with cancer but also with their family members. And he was not too far way so I linked up with him. I underwent training under his system and he and I worked together for about seven years before I moved to New Mexico.

In 1995 the Siri Singh Sahib asked me to come to New Mexico to start a research center to study the medical effects of yoga, which is what we have been working on—planting seeds and nursing it and watering it and letting it grow. We are a nonprofit organization called the Guru Ram Das Center for Medicine and Humanology.

One of the key things that we are doing now, in addition to working with people with HIV, cancer, chronic fatigue, immune based illnesses and other disorders, is that we are also now moving the science of Kundalini Yoga into the health care field, training health professionals. 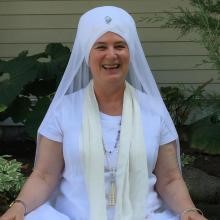 Shanti Shanti Kaur Khalsa, PhD, C-IAYT brings the ancient teachings of Kundalini Yoga into modern medicine as Founding Director of the Guru Ram Das Center for Medicine & Humanology. Under the guidance of Yogi Bhajan, she developed and directs the 1,000-hour IAYT accredited International Kundalini Yoga Therapy Professional Training. A Kundalini Yoga teacher since 1971, Dr. Khalsa began to specialize in teaching Kundalini Yoga and Meditation to people with chronic or life-threatening illness and their family members in 1986, under the direction of Yogi Bhajan.