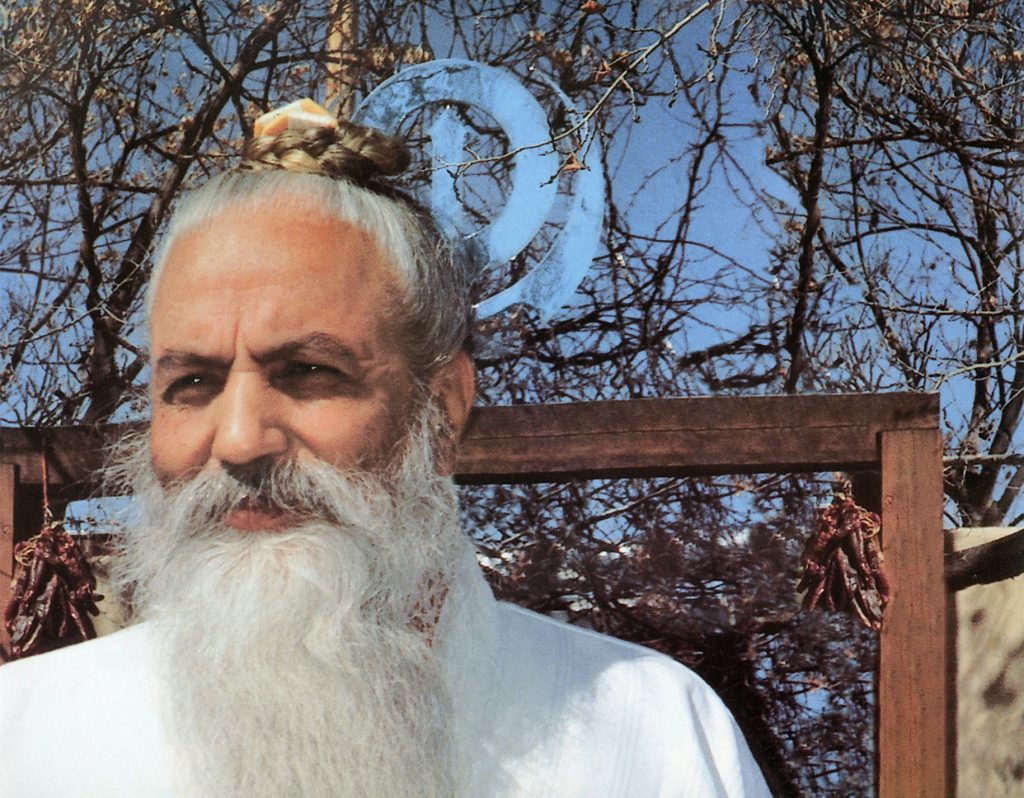 *This image and words from Soorya Kaur (staff member of Yogi Bhajan) were shared on page 13 of her book, YogiJi – The Light of Our Souls, written in 2005

When we first came to Espanola, New Mexico, a small rural town outside of Santa Fe, we were made to feel very unwelcome.  In fact, there were occasions when we had bullets fired at the property!  We were just so alien from anything they had ever known, with our turbans and white clothes.  Later a certain love and respect developed between the town and Yogiji, and the 3HO/Sikh Dharma community.

Yogiji loved, and took very good care of the land.  He had many fruit trees planted and took a great interest in the landscaping of the property.  He was a perfectionist.  Everything had to be immaculate.  He had an eagle’s eye for the tiniest little detail.  For example, the fringe on each oriental carpet had to be perfectly combed.  Everything was scrupulously maintained.  He had an elephant’s memory for anything he had asked to be done, and followed up on it.

There was a time in Santa Fe, when the metal symbols on the front hoods of expensive cars would frequently get stolen.  This particularly applied to the Mercedes.  Yogiji devised a system where you had to remove this symbol once you parked your car, and that would automatically lock it.  So, if you forgot to remove the symbol, and it got stolen, there was no way you could start the car.  On one occasion I was stranded outside a shopping plaza, with a car that I couldn’t start and needed to be rescued.

In this picture, I remember him walking the grounds of the ranch inspecting his vehicles.  In summer, Yogiji drove himself to the Summer Solstice site, high in the mountains.  An old army jeep painted white, his seal on the door, the gold Adi Shakti symbol planted on the front hood and the Sikh flag fluttering in the breeze, was his official conveyance.  The unpaved solstice road, a challenge in a regular car, was a terrifying ride and took on a whole new dimension with Yogiji at the wheel of the jeep.  I survived by closing my eyes and somehow knowing that this was not the way we were going to die.