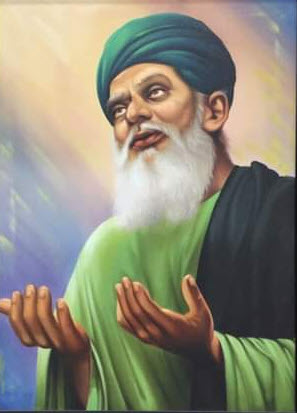 Written by Gurprasad Kaur Khalsa of Espanola, NM, USA in 2017:

There’s a beautiful story in 72 Stories of God, Good and Goods by Yogi Bhajan about Baba Farid, the great Sufi, whose writings are included in the Siri Guru Granth Sahib. It tells of how Farid’s mother decided she wanted her son to be a saint, so she told him to meditate on God. When she was met with resistance by her young son, she told him that God gives sweet things…and it only would take about half an hour. So with that promise, she got him to meditate daily for 30 minutes after which time he would check in a little pouch under his meditation mat and he would find cookies that his mother had placed there. This continued for some time, during which she praised his efforts and told him how she could see a great light coming from him which meant he was really with God. He didn’t believe her but he liked the cookies, so he kept up with his daily meditation for a good long while. One day, the boy was gone for much longer than his prescribed half hour, so finally his mother decided to check on him to find out what had become of him. She went to his meditation spot and found him sitting absolutely still, completely absorbed in ecstasy. He was in bliss. She tried to get him to respond but he was “gone”. It worried her and she finally threw cold water at him and eventually got him to open his eyes. He didn’t know what was going on and she told him that he shouldn’t meditate too much but should just eat his cookies, to which he responded that he was no longer interested in eating those cookies, he had found the real cookies! He told her that he was completely filled with the sweetness of God and that she had done her job. Now, he no longer wished to eat cookies, he just wanted God, which was better than all the cookies in the world!

All of us want the real cookies, and will ultimately never be satisfied with anything else until we get them, but there are many different kinds of cookies along the way, and when we are young and growing on the spiritual path, they can serve their purpose just as Baba Farid’s cookies gave him a taste of the real thing.

We know the words of Yogi Bhajan regarding Sadhana, what it will give us, who we will become. We know that it will cleanse our subconscious, increase our awareness and crystalize our consciousness. We want so badly to become that elevated person. We experience the joyful comradery of doing group Sadhana at Solstice or in teacher training. We tap into that tremendous longing to belong. We have an experience of our souls, our depth, the beauty of who we are. We feel great after a good yoga set and we love the beautiful etheric quality of our favorite Sadhana musicians. We master harder and harder practices for longer and longer periods of time. We become known for our keep-up and strength. We develop our intuition and become very wise.

And sometimes the cookies disappear for a time and we lose our hunger for them. We fall out of love with the practice and desire something else more or instead. We get bored or simply feel that it’s not working any more. We get taken over by life; work, family, social activities. We get exhausted, overwhelmed, and it seems the logical thing to cut out is getting up at 3 am. There are many issues and distractions when you are not a Sadhu living in a cave, but a yogi and a Sikh living in the world in the 21st century.

Amidst it all, when we are so blessed, we start craving cookies again. Maybe something catastrophic befalls us and we have no place else to turn. We hit a dead-end in our life. Depression starts eating away at us. We start waking up at 3:00 am and can’t get back to sleep. All these things happened to me, and I consider them the greatest gifts of my life. The Siri Guru Granth Sahib tells us that pain is the remedy and pleasure the disease, because in pleasure we don’t need God. It’s only pain that drives us right back into that deep longing for meaning in our life, which takes us to God. Whatever the reason, when the blessing of wanting Sadhana in our life comes or returns, it is not us that control it. By His command, some are blessed with gifts, by His command, some wander on and on.

Back to the cookies…if we want them badly enough, we place ourselves in their way. We ask for them. We beg for them. We associate with people who have them. And we stay aware of when they are being offered and we don’t miss the opportunity to get them. And in the words of our beloved teacher, we just keep faking it until we make it. We eat the substitute cookies until we get the real ones!