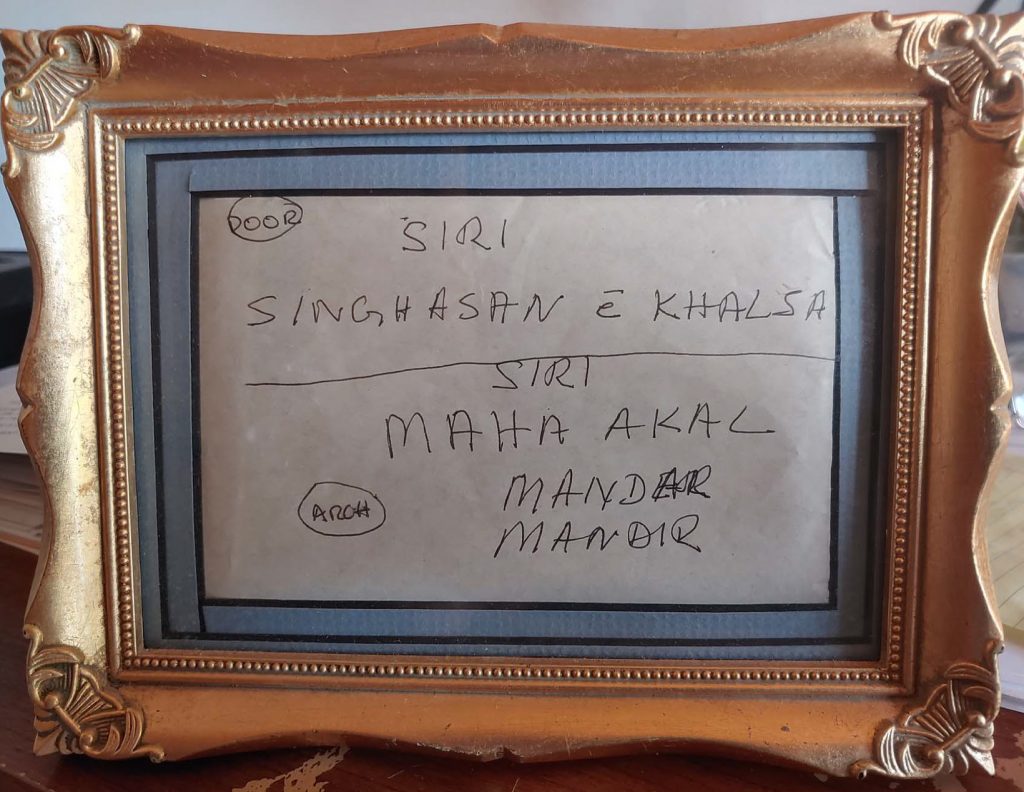 After the addition to the Gurdwara at Española was complete, the Siri Singh Sahib told us it was forthwith to be known as Siri Takht à Khalsa. This was big deal. There are five recognized Takhts (seats of authority) for the Sikhs. Here, the sole Siri Singh Sahib in Sikh history, installed by the Siri Akal Takht, the recognized central Takht, proclaimed as chief administrative head of Sikh Dharma in the Western Hemisphere was naming another Takht.

As a Sangat, we were giddy. We were also, without knowing it, TOTALLY out of our depth. We knew some Shabads. We could make lassies, sweet or salty. The world, however, was just a few years out of Operation Bluestar where the Siri Akal Takht was martyred, and a genocide of Sikhs in India was attempted.

We on the other hand, were young, we had no one among us old enough to tell us what we were doing couldn’t be done. We went out and had big steel letters plasma in cut in English and Gurumukhi, electroplated them in gold and hung them over the entrance of our Gurdwara. We went on for quite a little time with our flag raised high.

The Guru still does what the Guru does. The Jethadars of the five Takhts were on tour in Canada, visiting and giving respect to Gurdwaras and Sangats. There was a suggestion that the Jethadars should include Española in the tour. A great debate raged. There were many adamant that it was beneath the dignity of the Takhts to bestow a visit to the white kids.

One man stood up, Dr. Balkar Singh, a noted scholar of Sikhi and later to become our great friend. He did not know us at the time, but argued that if these people are innocently calling themselves Sikhs of the Guru, and they are requesting the Jethadars to visit, then the Jethadars must come visit.

I was walking around the back of Ranch house, doing whatever it was that day I was doing, and the Siri Singh Sahib called me over to sit with him.
He was having tea and discussion with a young Punjabi gentleman I did not recognize. They were discussing the upcoming visit of the Jethadars.  It
was the first I was hearing of the visit.

“You know the letters on the Gurdwara son?”

“You need to put up new ones this week”

He told me what he wanted.  The letters above the Gurdwara entrance would now read Siri Singhasan e Khalsa and there would be new letters on the archway entrance reading Siri Maha Akal Mandir.  In the discussion it was agreed that Singhasan was synonymous yet different with Takht.

Very uncharacteristically of me, I asked if he would write it down. I didn’t want to get it wrong. I even added little notes to which would go where and showed him, so no mistake would be made.

I got the job done in time.

At the visit, there were those, as part the entourage, who contended, if we had named our Gurdwara a Takht, as it was known by the rumors, our Gurdwara should shut down, and heavy sanctions applied. The Jethadars pointed to the newly installed letters, and said, “See the rumors are not true. No need to worry. These Sikhs love the Guru.”

P.S. the image above is his written instructions.

Read more articles from Mukhtiar Singh about Siri Singh Sahib Ji’s participation in the renovation of the Gurdwara.