The Sparkling Presence of the Guru 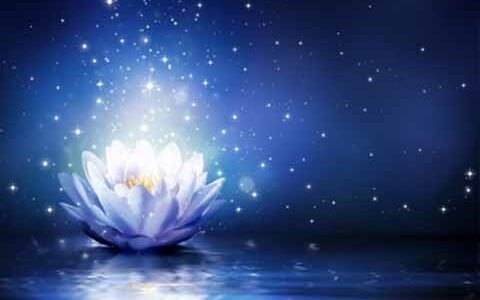 Many years ago, the Siri Singh Sahib looked into my eyes, and my heart was pierced with love for a master. I found my path and became a Sikh at that moment. During my first few years on the Sikh path, I experienced many challenges that can be expected when leaving behind the baggage of the past. At that time, I mostly relied on the Siri Singh Sahib for assistance, writing letters to him and attending his classes. This was my biggest link to being a Sikh in those days.

Then one day, I wrote a different kind of letter to the Siri Singh Sahib, without asking for advice or narrating problems. My letter to him said, “I bless the day that I met you and you brought me to the Lotus Feet of the Guru.” The Siri Singh Sahib responded that this is exactly how one should write a letter to his/her spiritual teacher. 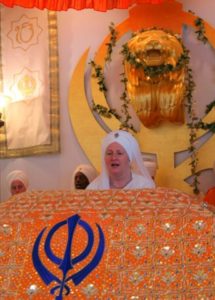 For many years now, I regularly read from the Siri Guru Granth Sahib and check in with the Guru whenever I need guidance. The advice from each Hukam is so clear and at times uncanny.

For example, sometimes the Guru will advise against a certain action. Later, someone will say to me, “It’s lucky you decided against that action. It would have been bad for you. How did you know?” At other times, I just pray to the Guru whole-heartedly to bless/resolve a situation for the good of all involved. Throughout the years, I have seen again and again how the Guru miraculously covers me in big and small ways.

At other times while reading from the Guru, it becomes clear that I need to say specific things at a meeting, to take care of certain situations in a particular way, to call someone and work with them on a project, etc. Sometimes while I am reading, I may gain an understanding of what’s going on with a specific person or situation. This information comes to me without my even thinking about it beforehand.

My favorite experience is when I am reading from the Guru and lose track of time and space, only listening and merging into the words I am reciting. At these moments, I realize I am and always have been immersed in the sparkling presence of the Guru, blessed by the Darshan of the Siri Guru Granth Sahib. No matter where I go or what I do, my beloved Guru is always with me. 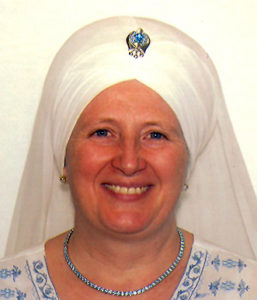 MSS Hari Dharam Kaur Khalsa was appointed Chief Granthi of the Española Gurdwara by the Siri Singh Sahib Yogi Bhajan, who directed her to share teachings of sound current and Gurmukhi/mantra pronunciation. Sikhs and seekers from around the world have enjoyed learning with Hari Dharam Kaur, inspiring them to awaken their inner Guru. The Siri Singh Sahib has said that Hari Dharam Kaur brings God on Earth when she reads from the Siri Guru Granth Sahib and that whosoever learns from her will be rewarded on Earth and blessed in the Heavens.