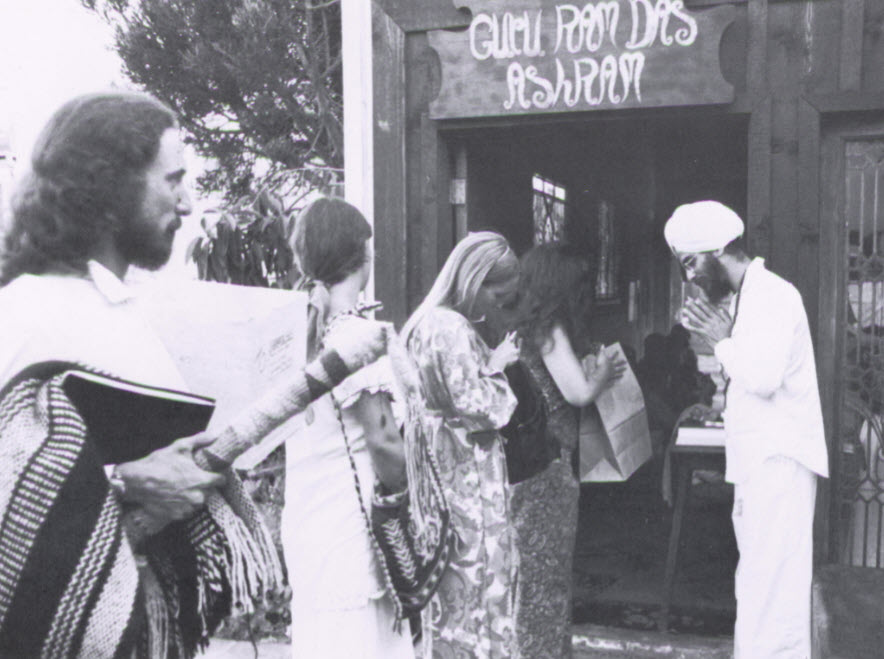 From page 71-73 of the book, The Man Called the Siri Singh Sahib, published in 1979 and written by Yogi Bhajan.

I have seen three visions in my life.  The funny thing is that I actually see them happening, so that at that moment there is no duality about it.  Unfortunately, I do not know how to dream, so I have no concept of that experience for comparison.  Sometimes these visions come, and they are beautiful, and whether I believe in miracles or not, I do believe those visions because they are very perfect.

The first one happened when one person who was supposed to be a very saintly man, challenged me that if Guru Ram Das is really my Guru, then he must have given me a Guru Mantra.  I told him that every Sikh has the Guru Mantra and that is Wahe Guru. But he was challenging me that if Guru Ram Das was my personal Guru, then he should be in a position to give me his mantra.

So, I said,’ Okay, I will meditate, and I’ll see.  If Guru Ram Das loves me, he may appear, if not, I can’t say.’ So, the next day, I was chanting Wahe Guru, Wahe Guru, Wahe Guru, in the way, the time, the method, the technology in which the Guru Mantra is to be chanted.  After a little while I was surprised to find that there was a pure light in that room and then a human being was sitting there in the very visible form of Guru Ram Das.

And thus spoke the great Guru: ‘At this time you need a protection of a mantra.  The people who are following you are not ripe.  Chant this: Guru, Guru, Wahe Guru, Guru Ram Das Guru.  You do not want to claim anything as your own achievement, and you don’t want to take the blame either.  Let the claim be mine and let me also take the blame.  Now say this mantra.’

And I started saying it slowly, hesitantly, and I liked it.

Then I just ran, and told that man that I had actually seen Guru Ram Das in a very beautiful light and form.  He got very annoyed because he thought he could prove that I have to come to him as my guru.  He told me that he would show me the truth.  After that, they did make plans and attempts to kill me and do other things to us, but that mantra did protect us throughout the entire ordeal. 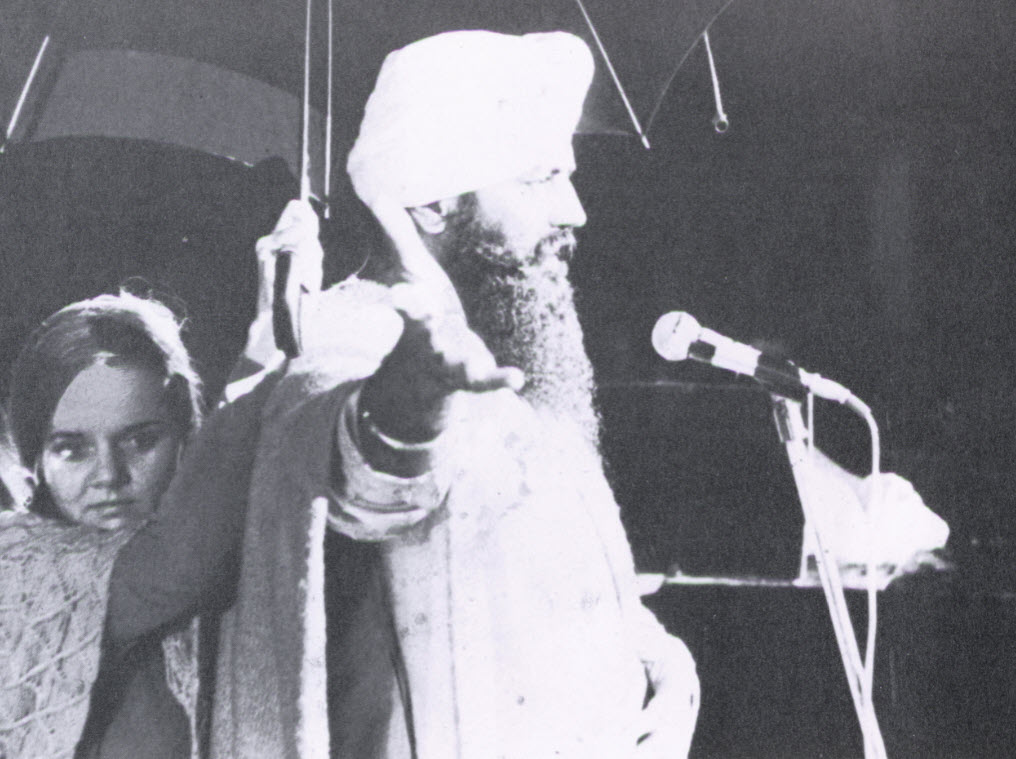 The second vision which I had, was also during that same trip to India in 1971, after we had moved away from the ashram and resettled ourselves in a mango garden outside Delhi.  What happened, was, that for a couple of days, it was happening that somehow our altar cloth in our meditation room would catch on fire.  Krishna (M.S.S. Krishna Kaur Khalsa) would come each time, very humbly to apologize, and she assured me that she had taken every precaution, but somehow, the altar would catch on fire.

I couldn’t agree that it was right for this to be happening, so one day, I decided that I will meditate with her and see what happens.  After a while, when I finished, I understood it and I saw a beautiful vision!  I saw a man on a horse who was less than five feet and six inches, in the perfect body of Guru Gobind Singh, but without a head!  There was no head on his body, and instead in that place there was a huge flame! So, I asked, ‘Guru Ji, what is this, there is no head? And he replied ‘Hard times will come on you.  Dharma will spread, but I have to return these seeds which you have brought with you from across the ocean. Follow me and I will carry you safely across, and then we will see what Khalsa will be.’

After that, a lot of things happened.  They wanted to fire on us, they wanted to bring the police on us, they wanted to find a way to detain the whole group from returning back to America.  They wanted to shatter us with legal court cases.  Through it all, I acted every part.  I signed every document, and I went through the whole thing.  But, the first time I consciously remember anything of that journey from India back to the United States, was in the Los Angeles airport, when Baba Singh brought me some coconut water.  I asked him if we had arrived in San Francisco?  He told me that the plane had stopped in Los Angeles, and they knew I was stopping at that airport, so they brought me that coconut water.”

It would have been very painful for my consciousness to deal with what everybody had done to us in India. I have all the conscious understanding of that whole situation, but I do not have the pain of it, because I never felt it myself.  Guru took the whole pain and let me go through the whole hassle of everything they wanted to do to us.  So, I can honestly tell you not to follow me.  Follow God and Guru and if you have no commitment, there is no use hanging around.

I had another vision which you can interpret.  I won’t even interpret it. I was very calmly meditating, and I began to experience that my body was being lifted up, and I went to an area where there was nothing but light.  It was a similar light to the one I saw when I experienced death.  It was a world of light and after seeing that, one need not see anything else.  Then, a voice came, a very pure voice, and it said something which I could not understand.  I said, ‘Say it in my language.’ And it said, ‘You will see it right now.’

And from that height, in my physical body, I was tossed up through a cylindrical column of light, until I landed in a park, in a very beautiful garden with very beautiful trees.  And I tried to resolve for myself where I was, so I asked, ‘Oh God, what have You done to me?  How will I live?  Where will I dwell?’  And the same Light appeared and said, ’Why should you worry?  People who will just dwell on you, I will dwell in them, and they will have everything they need in life.  Why should you be concerned about how you will live?

Those visions have really surprised me, but since I have actually seen them in such a real form, I have no choice but to believe them.  I have also seen that they exactly have been fulfilled, and that is why I wanted to share them with you.

The Siri Singh Sahib’s power as a visionary comes from his unceasing commitment to never relate to anything but the very highest achievement possible. If he once were to allow us to think any less was possible, he could never have created the dream he has. [/box]